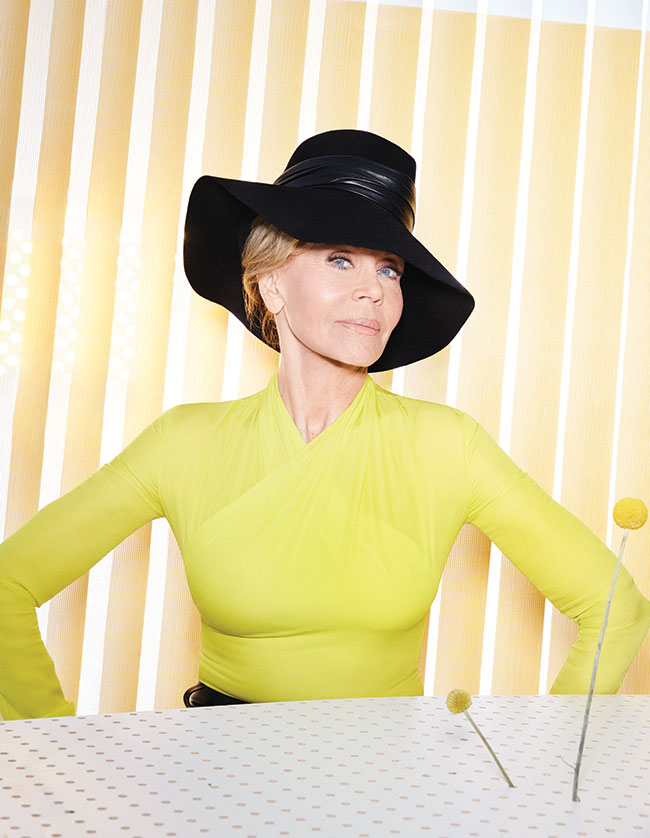 Jane Fonda has been knocking on doors, pounding the pavement, waving signs and making political speeches. As she celebrated her 82nd birthday, she also rang in the New Year by getting arrested for the fifth time in four months. These scenes aren’t from any of her socially relevant movies, however — it’s real life.

“I never would have expected my life to get so much fuller and, in some ways, more meaningful as I moved into my 80s,” Fonda wrote in a reflective blog post about her birthday. The legendary actress and lifelong social activist was writing from Washington, D.C., where she has been protesting — and getting arrested — since September after launching Fire Drill Fridays, a civil disobedience campaign to pressure lawmakers to take action on climate change.

“A real toughie” is how friend and co-star Lily Tomlin, 80, described her in a recent New York Times interview (she likewise joined in Fonda’s Friday protests and was similarly arrested). In Toronto during the Toronto International Film Festival (TIFF) last fall to help launch L’Oréal Paris’s new Age Perfect cosmetics line with a live In Conversation career talk, Fonda explains onstage that it was conducting an archeological assessment of her life as she was turning 60 that made her decide to live with intention.

Lately, that intention is the stuff of the many headlines Fonda made throughout the fall. Inspired by 17-year-old climate activist Greta Thunberg — an octogenarian and a teenager, united in the same cause! — and motivated by the urgency of Naomi Klein’s powerful book On Fire, which advocates immediate action on climate change, she temporarily moved to Washington. Fonda dedicated herself full time for several months to organizing weekly protests, before resuming production on the seventh and final season of her hit Netflix series Grace and Frankie in January. (According to Tomlin, she also attempted to convince the streaming giant to postpone shooting the last season until after the American election.)

Fonda didn’t just organize; she led demonstrators holding a placard high that read: Vote. Speak. Act. and famously spent one night in jail. The actress proudly held her zip-tied hands aloft, as triumphantly as if she were holding an Oscar, when she was rounded up alongside other protestors. As the U.S. plunges into a heated election year, Fonda’s pressure on climate change issues is unrelenting and, while she may not be on Capitol Hill this spring herself, she’ll help to nationalize the Fire Drill Fridays protest movement from Los Angeles, working the phone between takes.

I spoke with Fonda while she was in Toronto at TIFF. When we sat down to chat, she was candid on everything from red carpet expectations to current politics. She has a lot to say on both subjects because these days everything is an instrument of social change for Fonda — even her role with L’Oréal Paris. Fonda has been a global brand ambassador for 15 years and has said that she appreciates being chosen not in spite of but because of her age. The brand’s original slogan Because I’m Worth It debuted in 1971 and, in the midst of second-wave feminism and women having careers, invited women to re-centre themselves in their own lives. Around the same time, Fonda won her first Best Actress Academy Award for her role as a sex worker in Klute. The “hair epiphany” that gave birth to her iconic shag cut in the movie is what we may remember but, for Fonda, it was while preparing for that part that she was just beginning to understand feminism and the women’s movement — as she explains in the movie’s Criterion DVD commentary — that she had been resistant to for a long time.

The L’Oréal ambassadorial role fits in well with her longtime activism, Fonda says, not only giving her a highly visible platform but because it allows her to be able to afford the activism. “Financially,” she says, “and to give money to organizations that I work with.”

“L’Oréal Paris is a good company,” Fonda continues. “I like it. I like the people in it. When I first went to work there, the president was a trans woman [Sue Youcef Nabi] who had come up through the ranks, and I was impressed by that.”

Today, the momentum of starring in a beloved hit show like Grace and Frankie (where Fonda plays the driven and high-maintenance perfectionist Grace Hanson to Lily Tomlin’s nurturing mellow hippie Frankie Bergstein) is of a piece with writing op-eds, canvassing door to door for organizations like Working America and her many speaking engagements. “I feel that my role is to help to the extent I can use my celebrity to help people understand,” the two-time Academy Award winner explains.

The shifting attitude to be more positive, inclusive and representative of older women in the media — on screen in series like Grace and Frankie and in the beauty industry — is a relatively recent development. Working with the legendary actress Katharine Hepburn for 1981’s On Golden Pond, for example, Fonda admits that at the time she couldn’t have imagined an actress fronting a beauty campaign in her 70s or 80s. “Although Hepburn could have!” she says in hindsight. “She was a good deal younger than I am now when we did On Golden Pond.” Hepburn was 74. “And if she were alive now, and that age, she probably would’ve been one of L’Oréal’s ambassadors because she was so beautiful.”

Not that Fonda wasn’t ahead of the curve and sanguine at 40 — which is also when she started working out (leading to her wildly bestselling Jane Fonda’s Workout videos). “Not only am I not in a panic about my wrinkles and my age,” the actress told The Washington Post in a 1977 interview about the film Julia, “but not a day goes by that I don’t realize you get wiser as you get older …. Ten years ago, I would have been in one helluva panic about becoming 40 years old ’cause that’s all there was for me. But my life has substance now.”

Following her bestselling memoir My Life So Far, the 2018 HBO documentary Jane Fonda in Five Acts chronicled how the actress and activist often shaped her life and interests around the men in her life. There was the dynastic acting family daughter (with brother Peter and their esteemed father, Henry Fonda), the sex kitten (to French director Roger Vadim), the aerobics video queen and activist (with proceeds funding then-husband Tom Hayden’s political aspirations), the country club trophy wife (with media mogul Ted Turner). But the fifth act is all Fonda, defining herself. “That’s why I’m single now,” she gamely says onstage at TIFF. “Because I’m tired of losing myself.”

In a case of art not imitating life, however, Grace and Frankie viewers who are heavily invested in their enduring friendship (I know I am) were agog at the season 5 cliffhanger when, after learning to stand on her own two feet, Grace dropped the bomb that she had spontaneously eloped with Nick, her on-again, off-again lover.

Fonda won’t reveal any season 6 plot points (now streaming on Netflix) but will divulge what she hopes for her on-screen counterpart as the series winds down. “Grace is little by little in all the seasons learning from Frankie to not be so rigid, not be so judgmental, to let loose a little bit more, to be more empathic, to be more authentic and I wish more of that for Grace. And we will see,” she cautions. “I’m not saying it happens!”

And when it comes to step-and-repeat poses? “I don’t like the red carpet!” she declares. But, I suggest, the role of the red carpet has shifted over the past decade and, from red ribbons for the HIV-AIDS crisis to the all-black protest and #TimesUp pins, offers the opportunity for a certain kind of advocacy and awareness. “Maybe. Maybe,” she relents but chooses her words carefully. “We are so labelled as elitists. I think we have to be careful of using red carpets to make points. Maybe we should abolish red carpets altogether. And the message should be let’s just consume less, okay? Shopping doesn’t give us identity.”

But styled in Tom Ford and Gucci for British Vogue, having dinner with Liberian peace activist and Nobel Peace Prize laureate Leymah Gbowee in chic pantsuits or posing in fashion-forward Balmain and coquette high ponytails on the award-season red carpet, Fonda does appear to be having a grand time playing dress-up, so I broach the role fashion and the red carpet plays in her life.

“My feet hurt and my back hurts,” she admits with a laugh. “The dresses are uncomfortable, but it’s part of the job: to look good, to have the right makeup on and the right hair and the right dress — and I’ve learned to play the game.” Later, she’ll add that her preferred outfit is yoga pants. (Stars — they’re just like us!)

Now that L’Oréal Paris Age Perfect has expanded its offerings to makeup, Fonda is also the face of new cosmetics formulas that keep in mind the changing needs of women over 50 (like blush with a satin finish and a radiant serum foundation that doesn’t settle in fine lines). “The most beautiful makeup for a woman is passion,” Yves Saint Laurent famously said, “but cosmetics are easier to buy.” At 82, Fonda has the former in abundance and also clearly still enjoys the transformational power of makeup. She regularly ventures beyond nude and neutral lips into vivid poppy and fuchsia shades (the new Age Perfect hydrating lipstick range offers 20 colours and essentials like anti-feathering lip liner).

Fonda is loyal to her beauty brand and to her trusted longtime glam squad (who have the TeamFonda T-shirts to prove it). As we talk, Fonda’s personal makeup artist David DeLeon is in the next room. The Emmy-winning makeup artist has also worked with Barbra Streisand and Helen Mirren but has been Fonda’s go-to since Grace and Frankie’s second season. “Fresh, rosy and glowing” are adjectives that come up often in his tongue-in-cheek Instagram posts on the looks of his star client.

Fonda says she chats with Tomlin between takes on set. “But in the makeup trailer in the morning at 5 a.m. or whenever we’re there,” Fonda says, “David, and Jonathan Hanousek, who does my hair and who’s always up to date on things, we do a lot of talking politics.” There must be a special intimacy to friendships forged in the makeup chair — at the urging of her glam squad, Fonda decided to make the hit female buddy comedy Book Club, which went on to make more than US$100 million.

Going back to Fonda’s exhortation to live with intention, that curiosity and openness seem to play as much a role in her ongoing vitality as friendship and clever cheek rouge.