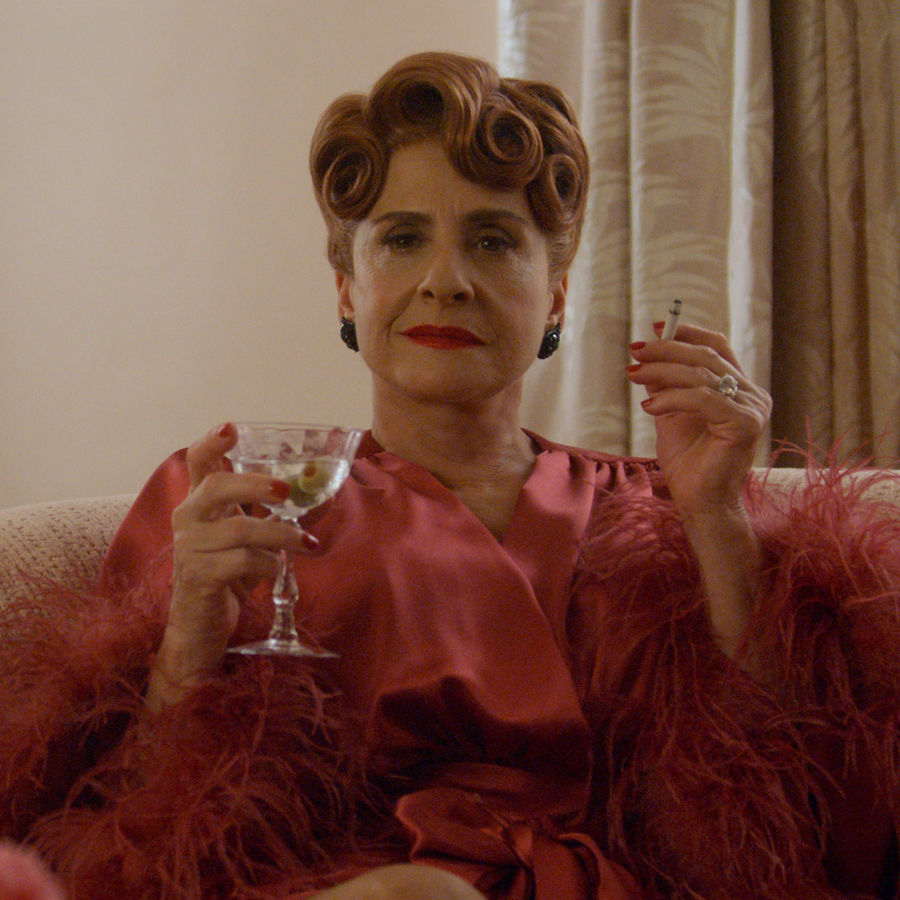 Patti LuPone has Hollywood on the brain. Well, Hollywood and Hollywood — as in the new Ryan Murphy Netflix miniseries set in a postwar Tinseltown aglow with a veneer of glamour that masks the fight for equality and stardom raging in its back lots and bedrooms.

For LuPone, a stage and screen legend who grew up on a diet of silver screen classics, and who recently tweeted that shooting Hollywood  across the street from the Hollywood sign “could not have felt more in a dream,” this series proved a perfect fit.

“My education has been Hollywood movies. I grew up in the 50s and we would go to the movie theatre. And I didn’t see the great films of the 30s and 40s in the movie theatre, but they would be on television,” the actress, who turns 71 on April 21, says over the phone from her Los Angeles home. She adds that she used to cut school if a movie by her idol, Bette Davis, was on. “And I grew up wishing I could be a movie star. Who didn’t want to be a movie star?”

It’s “the mystery and the glamour and the larger than life environment” that hooked her, “and especially the mystery of the movie stars. Now there’s no such thing as mystery in a movie star. We get to know everything about them. I don’t want to. I want to know just that image on the screen. And that was so alluring.”

In Hollywood, as in Hollywood, the image on the screen often varies dramatically from the off-screen reality. In the vein of Quentin Tarantino’s revisionist Once Upon A Time…In Hollywood, the seven episode Netflix series rewrites aspects of Hollywood history, bringing issues of equality and representation that echo the modern #MeToo, Time’s Up and #OscarsSoWhite movements to the fore decades earlier than in real life.

Within that world, LuPone plays Avis Amberg, a former actress whose on-screen dreams were stifled and instead went on to marry a studio head — played by Rob Reiner — whom she despises. Instead, she gets her kicks from playing socialite and bedding young big screen hopefuls.

The Ghosts of Old Hollywood

LuPone, who also appeared in Murphy’s hit 2013 series American Horror Story: Coven, recalls the television maven saying that the part of Avis was loosely based on socialite and Broadway producer Irene Selznick — daughter of Metro-Goldwyn-Mayer co-founder Louis B. Meyer and wife of legendary producer and screenwriter David O. Selznick. So she immediately read her memoir, A Private View.

“She had a very privileged upbringing and she met them all, she had dinner with them all. And just to have imagined what life was like back then,” LuPone says. “So then I became obsessed with old Hollywood.”

That obsession led her to search out the remnants of old Hollywood hidden within the current Tinseltown landscape on her days off. LuPone recalls going with friends to find the site of Elizabeth Taylor and Michael Wildings’ home, outside of which Montgomery Clift famously crashed his car after leaving a party. She also found Pickfair, “or what was left of Pickfair, which is just a gate” — the former estate belonging to Douglas Fairbanks and Mary Pickford, David and Irene Selznick’s home and Louis B. Mayer’s Santa Monica beach house.

And then one day, while driving between shooting locations for Hollywood, she caught a glimpse of what looked like an original sign for “Hollywood Dream Apartments.”

“I thought, ‘It’s there. You just have to look for it.’ And it evokes a time when the movie industry was the only industry in that city. And that industry is creating dreams.”

One of the great pleasures of watching Hollywood is revelling in the nostalgia overload: the 1940s era sets, costumes and makeup, the workings of the studio system and the encounters with legendary screen idols, like a young Rock Hudson (played by actor Jake Picking). And lets not forget the pristine red 1946 Cadillac that LuPone rolls up in during one scene. “Oh boy was it fun to drive,” she crows. “It’s just a solid piece of steel.”

Of course, we often turn to nostalgia and the evocation of supposedly simpler times during crises, like the COVID-19 outbreak. So in that sense, Hollywood arrived at just the right time. LuPone offers a nod to the show’s stunning aesthetic and agrees that “the escapism is good for all of us,” but she also looks beyond Hollywood as a nostalgia vehicle to its ability to spotlight critical social issues related to race, representation and sexuality.

For some characters, the colour of their skin is the stumbling block to their success. Others carry their closeted homosexuality like an anchor. Standing on ones principles isn’t advised in Hollywood, especially if indulging a sexual predator’s carnal needs could make you a star. But then something interesting happens. Change — the sort of seismic shift that’s begun to break barriers and alter the real Hollywood’s power dynamic in recent years. Except, in Hollywood, with it’s historical revision, the change starts about 70 years earlier, allowing for a show that feels both of its time and of ours.

“Hopefully times will change when this pandemic is no longer a threat,” LuPone adds, “and [the] ‘what might’ve been’ element of the show can remind us of being better people and more sensitive.”

That includes focusing on the representation of women in Hollywood. LuPone’s character, Avis, had her own Hollywood dreams dashed and warns another character — played by Holland Taylor, 77 — to find a man rather than risk being labeled an “old maid.” It raises questions of how women are perceived in popular culture, particularly when they age beyond the threshold that Hollywood considers “young.”

LuPone — a multi-time Tony, Drama Desk and Laurence Olivier Award-winner and American Theatre Hall of Fame inductee — notes that spending most of her career on the stage allowed her to “play fantastic roles.” That, of course, includes being the first actress to portray Eva Perón in Evita on Broadway, Fantine in Les Misérables in London and Norma Desmond in Sunset Boulevard, also in London, to name a few.

She does, however, recall starring in the ABC drama Life Goes On from 1989 to 1993, noting that she “really resented how the patriarchal environment … completely diminish[ed] the matriarch in that show. And I actually spoke to them. I said, ‘You’re writing an incredibly boring woman and I am a working mother and I am not boring.’ And I got angry that they would depict a woman in that respect.”

Today, though, she believes women in entertainment are “owning their own power and that is a very good thing.” LuPone points to women like Reese Witherspoon, who commands her own production company and who’s both starred in and produced shows like the hit HBO series Big Little Lies and the AppleTV+ series The Morning Show.

At Home with LuPone

For LuPone, the nostalgia trip doesn’t end with Hollywood. While isolating in her Los Angeles home, she channels the pent-up energy usually reserved for the Broadway stage into Twitter videos for her fans. First, she chooses a tune on her Wurlitzer jukebox and then she dances through a tour of her basement, which includes antique furniture, old photo albums, vinyl records, a pinball machine, vintage posters and Broadway soundtracks — on cassette tape no less.

In another video, she costumes up and serenades fans with the Andrew Lloyd Webber tune “With One Look” from Sunset Boulevard.

For all her energy and enthusiasm, though, LuPone is planning a low-key isolation birthday celebration.

“It’ll be quiet and I’ll be with my family. And they’re kind of concerned that they can’t get anything for me,” she explains. “And I don’t want anything. I just sort of want to be with them and do nothing. Watch a movie, take a walk, ride a bike depending on the weather.”

And when asked for her advice for staying healthy during this trying time, LuPone offers a simple piece of wisdom.

“Breathe. Keep breathing. That’s the only thing,” she says. “I will take a walk and I will inhale and everything’s right with the world. We don’t deep breathe. It sounds incredibly simple. We’re shallow breathers and we don’t understand or we don’t appreciate what that is, just getting out there and breathing.”

Hollywood premieres on Netflix on May 1.

From Hollywood Star to Monument to Icon, Kirk Douglas Oozed Masculinity and Charisma

A Dozen Ways to Get Your Old Hollywood Fix