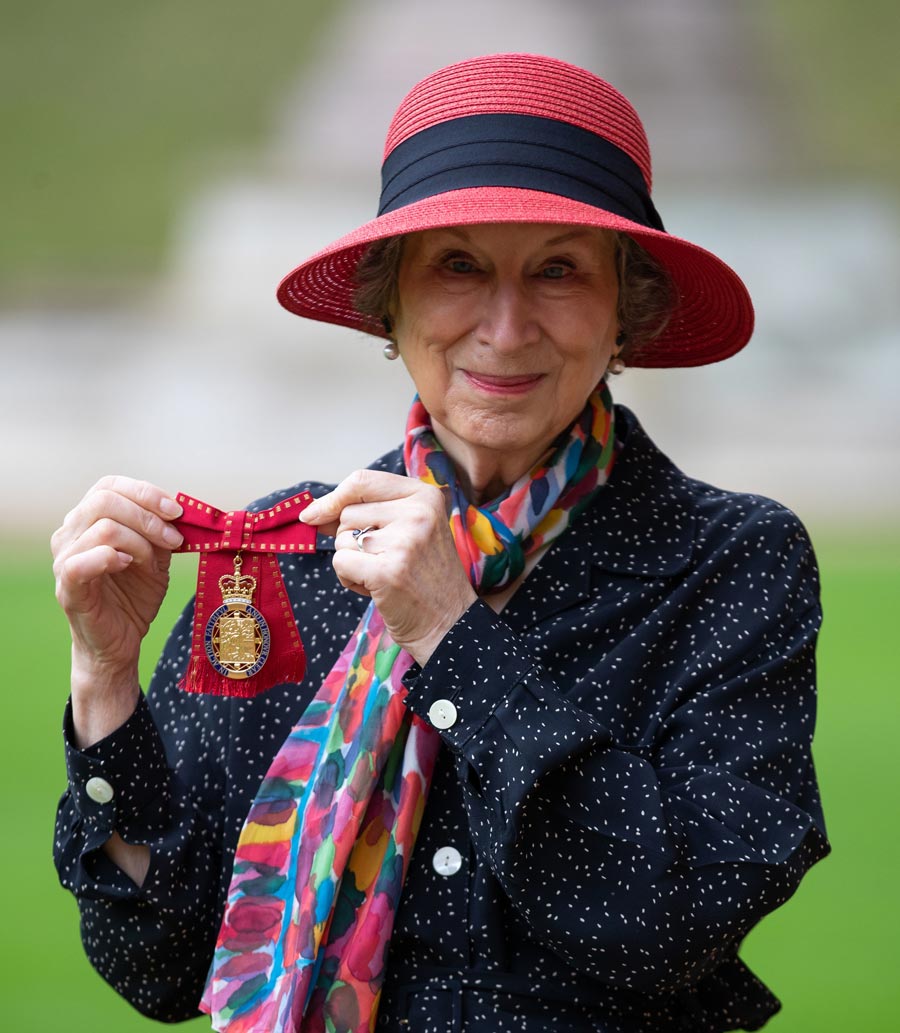 Margaret Atwood poses with her award after she was made a Companion of Honour by Queen Elizabeth II following an investiture ceremony at Buckingham Palace on October 25, 2019 in London, England. (Photo by Aaron Chown - WPA Pool/Getty Images)

“If you’re put on a pedestal, you’re supposed to behave yourself like a pedestal type of person. Pedestals actually have a limited circumference. Not much room to move around.”  ― Margaret Atwood in a 2013 interview with the Telegraph.

To celebrate Canada Book Day on April 23 – which is also World Book Day – we turn to Canada’s Queen of Letters, Margaret Atwood. Last year, the 80-year-old  won her second Booker Prize for her novel The Testaments (The Blind Assassin won her her first Booker) and received the prestigious Order of the Companions of Honour from Queen Elizabeth II.

A recent documentary, Margaret Atwood: A Word After a Word After a Word Is Power, was shot over much of Atwood’s 80th year and follows her around as she attends festivals, visits the Toronto set of The Handmaid’s Tale and prepares for the launch of The Testaments. The filmmakers also call it a love story, showing the deep and caring relationship between Atwood and her long-time partner author Graeme Gibson, who died last year at the age of 85. The couple had lived together since the early 1970s.

The film also explores Atwood’s major works, revealing the personal and societal factors that inform the celebrated storytelling of Canada’s most famous writer.

Atwood has always balked at being called a national treasure. “All these things set a standard of behaviour that you don’t necessarily wish to live up to,” she said in an interview in 2013 with The Telegraph. But her impact on the literary scene in the 20th century is legendary.

Here is a list of some of her essential works, along with companion books by other authors who explore similar compelling themes. In June, Variety reported that the rights to The Edible Woman have been picked up by Entertainment One. The sequel novel The Testaments was the publishing event of this year, winning Atwood her second Booker Prize and breaking sales records in Canada and around the world. The books is reportedly being adapted for the big screen, with Jennifer Lawrence playing the condemned woman. A series adaptation of the trilogy is in the works at Paramount Television and Anonymous Content. When the end of the world comes, it seems to start in Toronto, during a performance of King Lear. The early pages of Station Eleven, as a plague spreads through the city, are chilling and harrowing, but it’s what comes after the end that truly dazzles in Mandel’s novel (which is being made into a TV series.)  The world after the plague is a place of mystery and recovery, where questions are answered and more are uncovered.