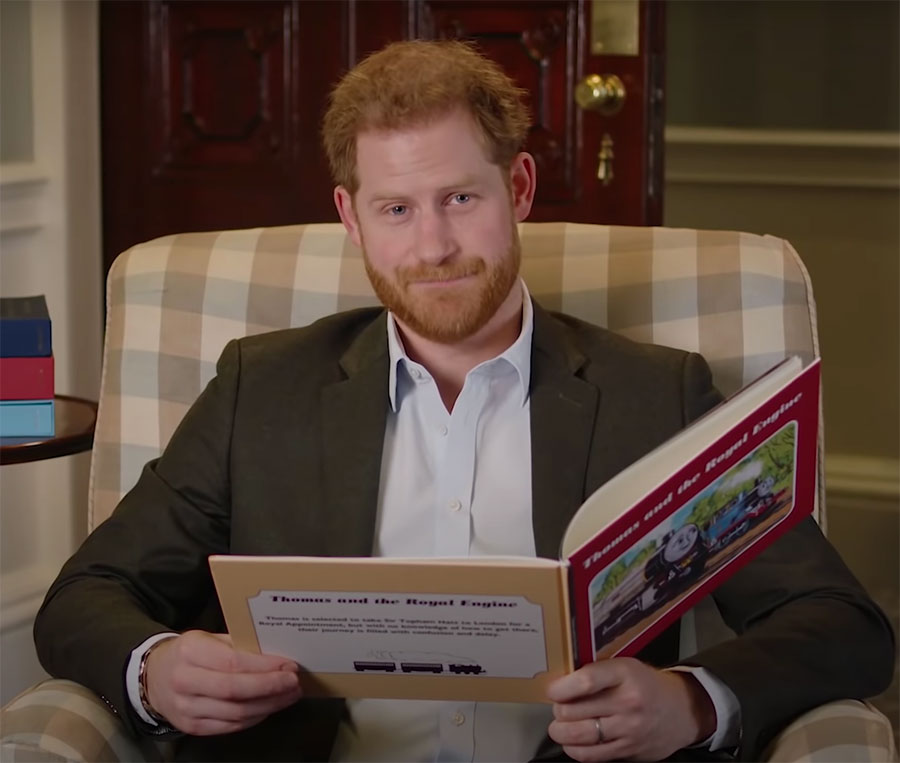 Prince Harry, who has been a fan of "Thomas & Friends" since he was a child, appears on the latest episode of the show set to air on Friday. Photo: Youtube/The Telegraph

Prince Harry will make an appearance in a special episode of Thomas & Friends to celebrate the  75th anniversary of the children’s TV show about a cheeky blue train engine.

The series, which got its start in the U.K. in 1984, is going back to its roots with a royal-themed episode. Thomas and Friends: The Royal Engine begins with a personal introduction from Prince Harry, and will feature the Queen and a young Prince Charles as animated characters.

The Duke of Sussex, who recorded the intro in January before he left the UK with his wife Meghan and son Archie, has had an affinity for Thomas the Tank Engine since he was a child.

“Thomas the Tank Engine has been a comforting, familiar face to so many families over the last 75 years — entertaining, educating and inspiring children on important issues through exciting stories and characters,” Prince Harry said in a statement.

“I certainly have fond memories of growing up with Thomas & Friends and being transported to new places through his adventures.”

In the 22-minute special, railway controller Sir Topham Hatt has been invited to London by the Queen to receive an award for distinguished service, and a young Prince Charles has asked Thomas to take him there.

In his introduction, Prince Harry cosies up beside a fireplace in an armchair  to read from a Thomas the Tank Engine book.

Watch a preview of the episode below

The children’s show is based on Reverend Wilbert Awdry’s The Railway Series, which began as a bedtime story for his son during a bout of the measles and was first published in 1945.

When Thomas gets to London in the new episode, audiences will meet a new character, a train called the Duchess of Loughborough, voiced by actor Rosamund Pike.

“It is an absolute honour to have the chance to appear in the show, and I take it as a big responsibility to play Duchess, who is a lovely, warm, bubbly sort of effervescent engine that I am incredibly drawn to because she is very anxious to get things right,” Pike said.

The show will air on Netflix in the U.S. on May 1 and on Channel 5’s Milkshake show in the U.K. the following day. It will also be broadcast in Canada and Australia later in the month.

Harry and Meghan have been keeping a low profile in their new home town of Los Angeles since they left Victoria just before the Canada-U.S. border was closed to non-essential travel in March to curb the spread of the novel coronavirus. They were first spotted out the week of April 16 in jeans and face masks as they delivered free meals to clients of the charity Project Angel Food in West Hollywood.

But Meghan surprised a client of one of her patronages, Smart Works, on Wednesday when she appeared from Los Angeles via Zoom to provide words of encouragement ahead of a job interview.

“I just wanted to be able to call in and wish you the best of luck and my fingers are crossed for you,” she told the client in London. “There’s so much going on in the world right now and to be such a beacon of hope and focusing on getting through it, and all the positivity that we just want to send your way, and to make sure you can get on the other side of this too, and have such a great opportunity there.”

The charity, which helps women find jobs by coaching them and providing professional clothes, was given a boost when Meghan became a patron in 2019 and designed a capsule collection of office wear called The Smart Set in September, with proceeds going to Smart Works . She also featured the non-profit in the September issue of British Vogue, titled Forces for Change, which she guest edited.

“It’s been such an honour to meet and learn from so many talented women in the Smart Works network over the years, and recently to see the amazing work they’re doing to adapt their programs to the reality of this pandemic,” Meghan said in a statement.

Vancouver’s Royal Moment Thanks to Harry and Meghan