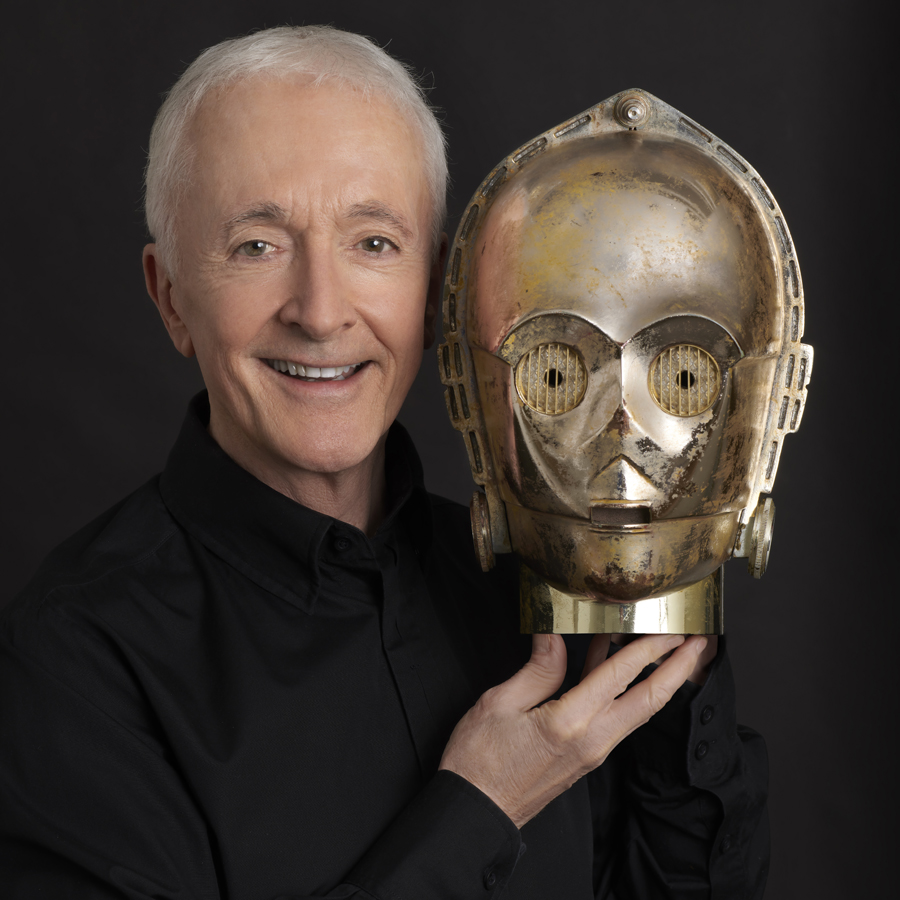 British actor Anthony Daniels, the voice and body of Star Wars droid C-P30, writes in his memoir that he was once jealous of the recognition heaped on unmasked co-stars like Mark Hamill, Carrie Fisher and Harrison Ford. Photo: Courtesy of D.K. Publishing / 2019

In a year when a global pandemic has most of civilization at a standstill, the idea of travelling to a galaxy far, far away seems pretty appealing. Sure, you’ve got to deal with Dark Side devotees, swarms of Storm Troopers and the occasional intergalactic war, but at least you can drop into a cantina for the odd drink or two with pals.

Back here on Earth, we’ll settle for celebrating May 4th — as in “May the Fourth Be With You,” otherwise known as Star Wars Day — in isolation, where fans can cozy up with the early release of the latest space opera instalment, the 2019 film The Rise of Skywalker, on the Disney+ streaming service. Of course, there’s also the news that not only is Baby Yoda returning with season two of the Disney+ series The Mandalorian in October, but the streaming service reportedly is already mapping out a third season. And lets not forget, as Variety reported, that Disney Executive Chairman Bob Iger recently suggested that The Mandalorian could see, “more characters and taking their ‘stories in new directions,’ nodding to potential for spinoff series.”

On top of that, news broke today that Oscar-winning Jojo Rabbit screenwriter and director Taika Waititi is on board to pen and co-direct an as-yet unannounced upcoming Star Wars film.

Add those potential future spinoffs to the existing and ongoing prequels, sequels, animated and anthology films and we’re going to need a whole other galaxy just to contain the content.

So to celebrate Star Wars Day, we revisit our 2019 interview with British actor Anthony Daniels, who played the neurotic, anxious, loyal and loveable droid C-3PO. Daniels, now 74, has been a part of the Star Wars universe since its “big bang,” so to speak, with the original  1977 film A New Hope, and he discussed playing the famed droid, The Rise of Skywalker and the potential end of his own Star Wars run.

Read on for our 2019 interview with C3PO actor Anthony Daniels…

After 42 years, three original films, three prequels and now three sequels, the Dec. 19 release Star Wars: The Rise of Skywalker aims to finally settle the score between the Force and the dark side once and for all.

Mark Hamill, 68, returns as Luke Skywalker, Billy Dee Williams, 82, reprises his role as Lando Calrissian for the first time in nearly four decades and Carrie Fisher, who died in 2016, appears as Leia Organa via previously filmed footage for this final battle of the Skywalker saga.

And alongside those legendary heroes, another beloved Star Wars staple returns for one last adventure in The Rise of Skywalker — British actor Anthony Daniels. The 73-year-old is, in fact, the only performer to appear in all nine Star Wars films of the Skywalker Saga though, unlike his co-stars, viewers never once got a glimpse of his face. In fact, Daniels may be the most famous Star Wars cast member you wouldn’t recognize on the street.

That’s because for 42 years, Daniels played C-3PO, the neurotic, anxious, loyal and lovable droid who proved one of the most enduring characters of the entire Star Wars franchise.

Watch Anthony Daniels chat with Zoomer about his new book and his latest Star Wars appearance.

As his final big-screen appearance approached, Daniels stepped out of the golden droid costume for the memoir I Am C-3PO: The Inside Story. It’s a candid look at the actor’s time as the famed droid, both the fun and fascinating moments and the more difficult ones, including resentment over the fact that his co-stars earned fame and recognition while he remained virtually anonymous. That eventually eased, allowing Daniels to enjoy the character he spent more than four decades embodying.

“I had survived long enough to pass through those negative shallows and rise up,” he wrote in the memoir. “I was grateful that my offering of Threepio was enjoyed by so many, over generations. The fans had become friends, whether we’d met or not. They liked Threepio. I like him, too.”

Daniels touched down in Toronto on his book tour and spoke with Zoomer about playing the world’s most famous droid.

What did you learn about yourself and your relationship with C-3PO through writing I Am C-3PO?

ANTHONY DANIELS: I think I learned that I have more tenacity than I realized, that I kind of had to stick with it because I agreed to do it and then I agreed to do it again out of choice, knowing what was involved. I guess I stuck through the difficult bits, like everybody does — I’m not the only person — in whatever role, whatever job. But what I did write about was my particular experience of something that millions of people have experienced from a different angle … I’m part of something that you’ve seen on screen for so many years that maybe it just fills in some of the cracks, some of the missing segments. So maybe you have a more rounded picture of what it’s like to be C-3PO from the inside.

If C-3PO wrote a book called I Am Anthony Daniels, what do you think he’d have most enjoyed about spending the last 42 years with you?

AD: [Laughs] That’s a really cute question. I have to think about that. I hope he would have found me kind and patient and I think he would have noticed my loyalty. Which slightly matches his loyalty, because as a character he is immensely loyal to any of the humans and indeed some of the machines that he’s placed with. So I think he’d like that.

Most people in their 70s can’t fit into the same clothes they wore in their 30s, never mind an unforgiving droid costume. And director J.J. Abrams even writes in the forward to your book that you are in better shape than he’ll ever be. What, then, is your secret to staying healthy and fit through the decades?

AD: Totally not true. It goes in ups and downs. Between the movies I can really lose it. But normally, if I have time and an opportunity, I’ll do a small amount of small exercises every day — not building up muscles but keeping what there is. Because, actually, wearing that costume you’ve got to be quite strong in the middle to hold it all together. And I work out in a gym with people with biceps bigger than me, and they’re doing five reps with big weights. I’m doing 200 with little weights. It’s so boring, that’s the only thing. It’s a killer. And also dieting is really important. Look, I binge like anybody else. And frankly, when you’re on the road, you end up eating so much trail mix and cookies and muffins that you blow the whole diet in a week.

You note in the book that you suggested melting down C-3PO in The Rise of Skywalker, but Abrams refused. If you could write C-3PO’s ride off into the sunset, how would you have the character go out?

Of course, I never conceived of him as disappearing altogether. I think that would be really sad. And as a machine — I don’t know. I find it hard to imagine him switched off forever, so lets not go there.

So there is a possibility that C-3PO may rise again?

As the only actor to appear in all nine Skywalker saga Star Wars films, did you ever think while shooting the first film that you’d still be playing the character 42 years later?

Actually, the original [title] was The Adventures of Luke Starkiller, then it became The Star Wars and then it became Star Wars. We were all very dismissive of it. We worked very hard, Carrie [Fisher] and Mark [Hamill] and me, Sir Alec Guinness, we worked very professionally saying these silly lines, all kind of going, “Really? Hmmm, hokey.” And George [Lucas] ignored all the naysayers. He battled on and on and on, through terrible circumstances … And the success that came, totally deserved. And what I love about now approaching The Rise of Skywalker, is that J.J. Abrams was 10 years old [when he first saw Star Wars] and retains that crazy enthusiasm that he got as a kid from George’s inspiration.

What a moment that stands out for you when you think back over all the years you played C-3PO?

One of them was getting back on Episode VII with Mark and Carrie and Harrison [Ford] — meeting the old cast who hadn’t been around in the prequels. What a pleasure, because that felt like almost coming home again. One of the original joys was that after two-and-a-half films, where R2-D2 didn’t make any sounds when I’m speaking to it, that when we’re on the road to Jabba’s palace and I’m [talking], suddenly there’s the “beep beep” sound, and it turned out to be George Lucas behind me pretending to be R2-D2. And that was a moment of little childish joy.

If The Rise of Skywalker is the last time we see you as C-3PO, how did it feel?

It felt absolutely right … My last day on set, it felt quite poignant, I will agree to that. I was emotionally moved by it, as were quite a few people on the set — all Star Wars fans, these amazing technicians who can do anything, and they all love working on Star Wars because they grew up with it.

I Am C-3PO is available in stores and online now.

Happy Star Wars Day! May the Fourth Be With You