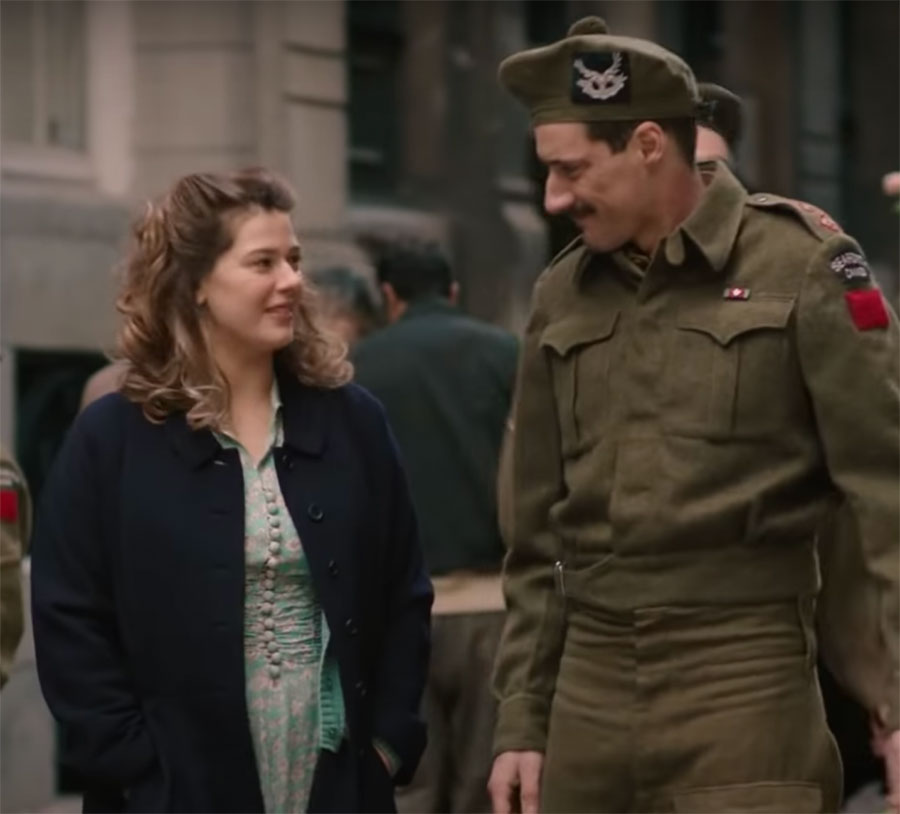 Marguerite Blaisse and Canadian soldier Lt. Gildersleeve are depicted at the victory parade in Amsterdam, where the couple first met in 1945. Photo: Historica Canada Heritage Minute/screenshot

“Before Amsterdam, I couldn’t have explained why we were there — all those years away from home. But the Dutch showed us why it mattered.”

That’s the sentiment attributed to real-life soldier Lt. Wilf Gildersleeve of the Seaforth Highlanders — one of the many Canadians who helped liberate the Netherlands from the Nazis on May 5, 1945 — in a new Heritage Minutes video released to mark the 75th anniversary of the event. You can watch the video below.

The Heritage Minute, produced by Historica Canada in cooperation with the Dutch government, tells the story of the liberation of the Netherlands by Canadian troops and a coalition of Allies through the eyes of Lt. Gildersleeve and a Dutch woman named Marguerite Blaisse (a real-life couple portrayed by actors).

In the video, Gildersleeve recounts how he and his fellow Canadians fought their way from Italy to the Netherlands in 1945, “sweeping for Germans along the way.” He adds that, “Our worst fear was to catch a bullet in these last hours of the war.”

Blaisse, meanwhile, recalls the invasion of the Netherlands by the Nazis when she was 15, followed by the deportation and deaths of Dutch Jews. Starving by 1945, she notes, “The food drops gave us hope. And then, the Canadians came.”

Blaisse says that, after the war, when the Canadians held a victory parade through Amsterdam, her dad wanted her to bring some soldiers home to thank them personally. “And that’s when I first saw Wilf. And I invited him over that afternoon.”

The video ends with the couple married and settling in Vancouver, where they spent the rest of their lives before both died in 2001.

Anthony Wilson-Smith, Historica Canada’s President and CEO, told CTV that the story of the couple “would be fairly well-known around Vancouver where they spent more than half a century before they passed, but it’s not well known nationally,” adding that they had eight kids together.

The Heritage Minute videos, which have celebrated significant Canadians and Canadian milestones since first launching in the 1980s, are the brainchild of famed Canadian businessman and philanthropist Charles Bronfman. The 88-year-old spoke with Zoomer about them in 2016, noting his inspiration for the short videos came from his travels to the U.S. and seeing how Americans celebrate their own history.

“And I will agree that Americans go too far with it, in my opinion. They wrap themselves in the flag … But in Canada, even in the 1980’s, Canadians had no measure of themselves,” Bronfman explained. “I’ve always believed that any society, in order to be a good society and an honourable society, has to have some heroines, heroes. And that’s really how the [Heritage Minutes] came about.”

The Heritage Minutes videos have covered everything from the Underground Railroad (the first Heritage Moment) to explorers, the history of Indigenous people in Canada, famous artists, athletes, activists and medical breakthroughs and even the Canadian roots of pop culture staples like Superman and Winnie the Pooh.

He also noted his belief that one of the reasons we don’t know about a lot of our own Canadian history is because of the way curriculums present it in school.

“One of the big problems that we had and still have in Canada is that Canadian history has been the dullest damn thing that we ever learned in school. And it’s a very exciting bloody story. So why aren’t we taught history as a participating sport, as it were? And live it? And live who these characters all were?”