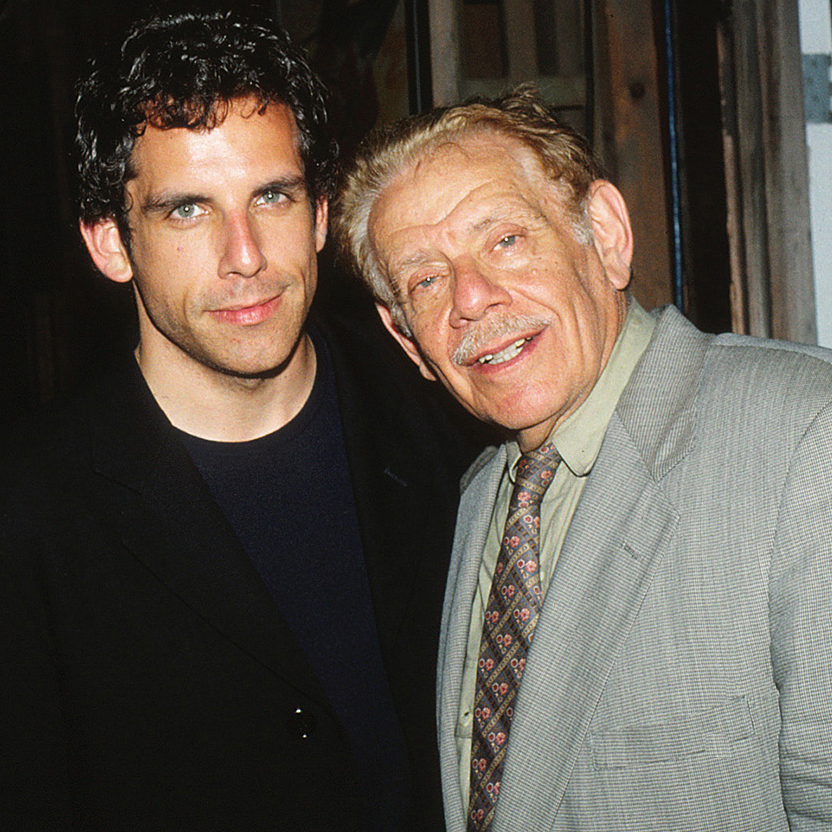 Jerry Stiller appeared in feature films alongside his son, actor Ben Stiller, most notably the "Zoolander" films, which the younger Stiller wrote, co-directed and starred in. Photo: Lindsay Brice/Getty Images

Comedian and actor Jerry Stiller, 92 — whose death from natural causes was announced on Twitter on Monday by his son, actor Ben Stiller — leaves a comedic legacy that began in the 1950s and lasted more than 60 years.

After meeting his wife, fellow comedian Anne Meara, in 1954, the couple — dubbed Stiller and Meara — performed with the Second City precursor The Compass Players in Chicago before taking their act to stage and screen across America, including performing on The Ed Sullivan Show and Johnny Carson’s Tonight Show. The pair also starred in two television shows together — the 1977 short sketch series Take Five with Stiller and Meara and The Stiller and Meara Show, a sitcom that lasted one season in 1986. After almost 62 years of marriage, Meara died in 2015.

While Stiller appeared in numerous films and enjoyed successful runs on Broadway over the years, many of his most memorable moments took place on television. That includes his roles on two hit sitcoms in the 1990s and 2000s, Seinfeld and King of Queens.

On Seinfeld, Stiller played Frank Costanza, the opinionated and quick-to-anger father of George Costanza (Jason Alexander), known for his frequent (and public) fights with his equally temperamental wife Estelle (Estelle Harris). He earned an Emmy nomination for the role, and in 1998, the same year Seinfeld ended its run, he landed on the Kevin James sitcom King of Queens, playing the dimwitted but lovable live-in father to James’ TV wife, Leah Remini, through to the series finale in 2007.

So to celebrate Stiller’s legacy we look back on some of our favourite Jerry Stiller television moments.

One of Stiller and Meara’s most famous bits revolved around the romantic trials and tribulations of Hershey Horowitz and Mary Elizabeth Doyle, whose relationship often endured culture clashes thanks to their respective Jewish and Catholic backgrounds.

In 1967, the couple appeared as Hershey and Mary Elizabeth on The Tonight Show Starring Johnny Carson and, in what seems more fitting today than it did back then, they discuss how they were matched up via a computer dating service.

In the same year, on the album Ed Sullivan Presents the Last Two People in the World: Jerry Stiller & Anne Meara, the pair jumped to the nuptial, detailing Hershey and Mary Elizabeth’s wedding plans.

A Festivus for the Rest of Us (Seinfeld)

From peddling a brassiere for men to his hilarious bickering with wife Estelle, Stiller’s Frank Costanza proved one of the most beloved secondary characters on Seinfeld. Upon news of his death, his Seinfeld son, Jason Alexander, posted a photo of the pair together with the caption “Yeah. I adored this man.”

Perhaps his greatest legacy on the show is being the character who introduced the world to Festivus. As the story goes, Frank Costanza became disenfranchised with the commercial and religious aspects of Christmas, so he invented his own competing holiday complete with bizarre customs and traditions, including the airing of grievances and feats of strength. As Frank explains in the episode: “Many Christmases ago I went to buy a doll for my son. I reached for the last one they had, but so did another man. As I rained blows upon him I realized there had to be another way!”

Festivus became an ensuing real-life pop culture phenomenon — it’s now even considered an official non-secular holiday celebrated every Dec. 23, which some might call a “Festivus miracle” — and it couldn’t have happened without Stiller’s impassioned and hilarious dedication to the celebration.

Another favourite Stiller moment from Seinfeld is actually a blooper. Stiller famously made his co-stars crack up during scenes, but no more so during an episode where Frank Costanza’s son George winds up in the police station after a scheme gone wrong. During Frank’s attempts to defend his son’s honour against insults hurled by Elaine (Julia Louis-Dreyfus), the actress can’t keep a straight face while Alexander, as George, winds up rolling on the floor with laughter.

How to Order a Domino’s Pizza (King of Queens)

Stiller’s loveable but dimwitted patriarch Arthur Spooner on King of Queens proved a pain in the behind for his son-in-law, Doug (Kevin James). And one of the best — and funniest — examples of that is when Arthur attempts to help Doug order a pizza.

Of course, Stiller kept fans laughing for the show’s nine-year run, racking up a “Best of “ reel all for himself.

It may have been nearly 60 years since they first performed together, but Stiller and Meara proved they hadn’t missed a comedic beat when they appeared together on a 2010 episode of Late Night with Jimmy Fallon to play a game of charades.

The couple showed up as special guests to compete against their son, Ben, and Fallon,  which had the audience — not to mention Roots, the house band — in stitches for the entire segment. They didn’t come close to winning the game, but they proved they still had what it takes to keep an audience howling.

Anne Meara, Half of Stiller & Meara Comedy Duo, Dies at 85