Happy 70th Birthday Stevie Wonder: Master of the Music That Became a Soundtrack for a Generation 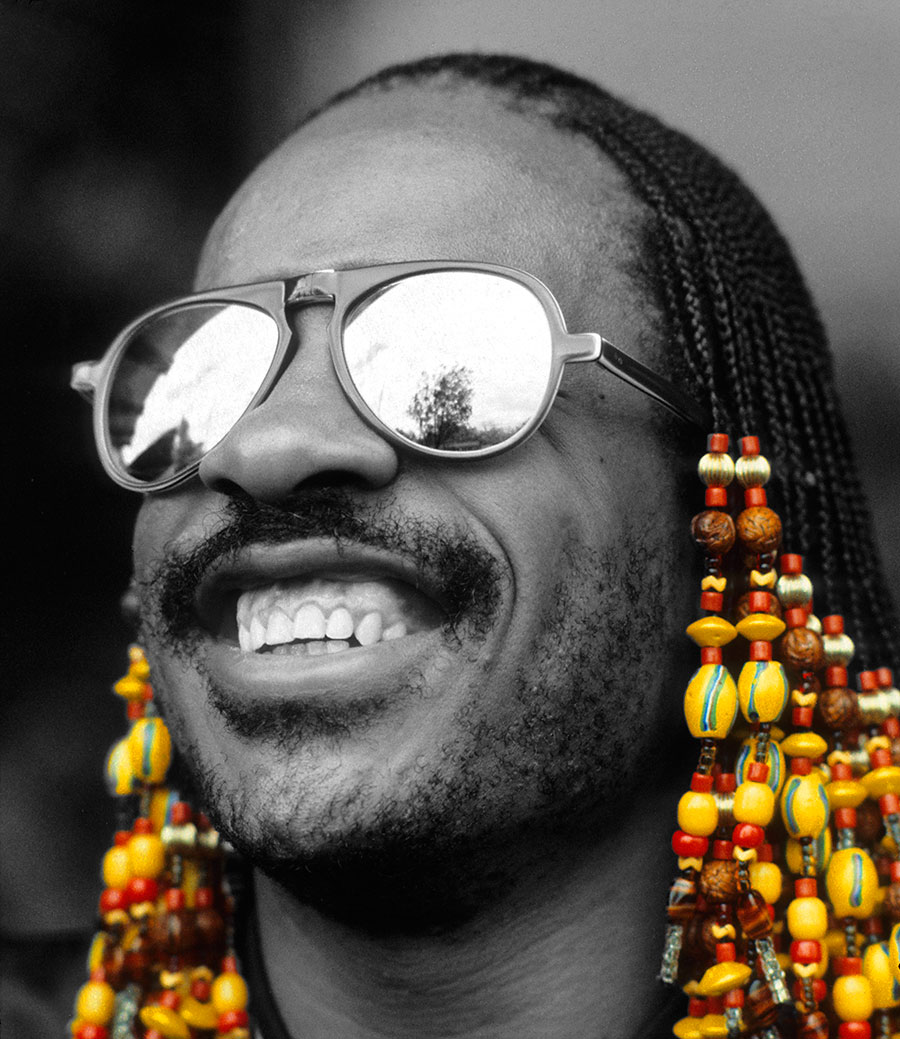 Superstar singer-songwriter Stevie Wonder, known for his cornrows and elaborate beads, has won a record-breaking 25 Grammys over his career, which began at age 11 when he recorded his first album for Motown founder Berry Gordy. Photo: Anwar Hussein/Getty Images

He was born Stevland Hardaway Junkins 70 years ago today, but the premature baby who went blind shortly after birth grew up to be a musical prodigy, a civil rights warrior and the life force known as Stevie Wonder.

The singer-songwriter from Saginaw, Mich., first found fame at 11. By the time he was 13, after being signed to a Motown label by founder Berry Gordy Jr., his song “Fingertips, Part 2” went to No. 1 on the Billboard Hot 100.

Wonder went on to write some of the most legendary songs of the 20th century, winning 25 Grammys over a lifetime for songs like “You Are the Sunshine of My Life,” “Superstition,” and “Sir Duke,” which featured his signature blend of funk, jazz, rhythm and blues, and soul.

By 25, the musician was talking about quitting the music scene and moving to Ghana, where he had traced his lineage, and dedicating his life to humanitarian causes.

“I’ve heard of great needs in that part of the world, the African countries,” he told the Associated Press in an interview. “I believe that you have to give unselfishly. … You can sing about things and talk about things, but if your actions don’t speak louder than your words, you’re nothing.”

In the 70s, Wonder went through an unrivalled burst of creativity in what became known as his classic period, with songwriting or co-writing credits on every song on 1971’s  Where I’m Coming From (and it’s Top 10 single, “If You Really Love Me”). Then there was 1972’s Talking Book (“Superstition” and “You Are The Sunshine of My Life”), 1973’s Innervisions (“Living For the City” and “Don’t You Worry, ‘Bout a Thing”) and, his first soundtrack, 1979’s Stevie Wonder’s Journey Through the Secret Life of Plants, for a documentary based on the bestselling book.

His seminal 1976 album, Songs in the Key of Life, debuted at No. 1 and stayed there for 14 weeks. It included 21 tracks that encapsulated his life to that point.

“He took his life experience and put them all into Songs in the Key of Life,” Gordy reflected in a 1997 documentary. “And it worked.”

The star has suffered from an undisclosed illness for several years that caused kidney damage, announcing in the middle of a tour in July 2019 that he would be taking a hiatus because he was getting a transplant from a living donor in September.

In his most recent performance, Wonder gave a moving rendition of “Lean On Me” in a tribute to soul icon Bill Withers, who died April 3, as part of the Global Citizen’s One World: Together at Home concert to support frontline health care workers.

“During hardships like this,” Wonder said on the April 18 show, “we have to lean on each other for help. My friend, the late Bill Withers, has the perfect song about that.”

On Twitter, after U.S. politician and Wonder’s “hero” John Conyer died, the musician reminisced about hearing Conyer’s voice when he was 16, as the former U.S. representative for Michigan called for a national holiday to commemorate Martin Luther King Jr. “I didn’t know that voice and those words would affect my life deeply, and we would share that mission, years later,” Wonder wrote. “That mission, the King holiday, is a symbol of John Conyers’ triumphant legacy.”

Conyer first raised the idea of a national holiday after King Jr.’s death in 1968, but it wasn’t until 1986 that Congress got on board and issued the decree that the third Monday of every January would be Martin Luther King Jr. Day. In a televised celebration, Wonder convened a concert that concluded with the singer-songwriter, accompanied by the all-star cast of Whitney Houston, Elizabeth Taylor, Bob Dylan, Quincy Jones and more, singing his famed version of “Happy Birthday” to the slain civil rights leader.

In 2018, Wonder kept King’s “I have a dream” message alive with a video project called Dream Still Lives, where he kicked off a montage of people from all walks of life finishing the sentence, “My dream is..”

“Dr. Martin Luther King Jr.’s teachings and works have led me and the world to give peace a chance,” Wonder said in the introduction. “Although Dr. King left us 50 years ago, his dream is still within all of us.”

The video featured former First lady Michelle Obama, who began, “The dream still lives,” with former U.S. President Barack Obama adding, “and our dream is a world where we recognize each other’s common humanity.”

In honour of Wonder’s 70th birthday, we bring you five masterful performances from those whose careers were inspired by the legendary singer-songwriter:

“Superstition” by Lady Gaga, at the 2015 Songs in the Key of Life – An All-Star Salute

“Until You Come Back to Me (That’s What I’m Gonna Do),” by Aretha Franklin with Stevie Wonder in 2005.

“Signed, Sealed, Delivered” by Ariana Grande and Babyface at the Nokia Theatre in L.A. in 2015

“Love’s in Need of Love” by John Legend, singing at the White House in 2011 after a Motown History Panel discussion.

Aretha Franklin to Retire: 5 of Our Favourite Queen of Soul Performance

Grammys 2015: How the Boomers Stole the Night

McCartney and Wonder Re-Unite 30 Years After Ebony and Ivory