Bernie Taupin at 70: The Famed Lyricist on His Second Act as a Visual Artist 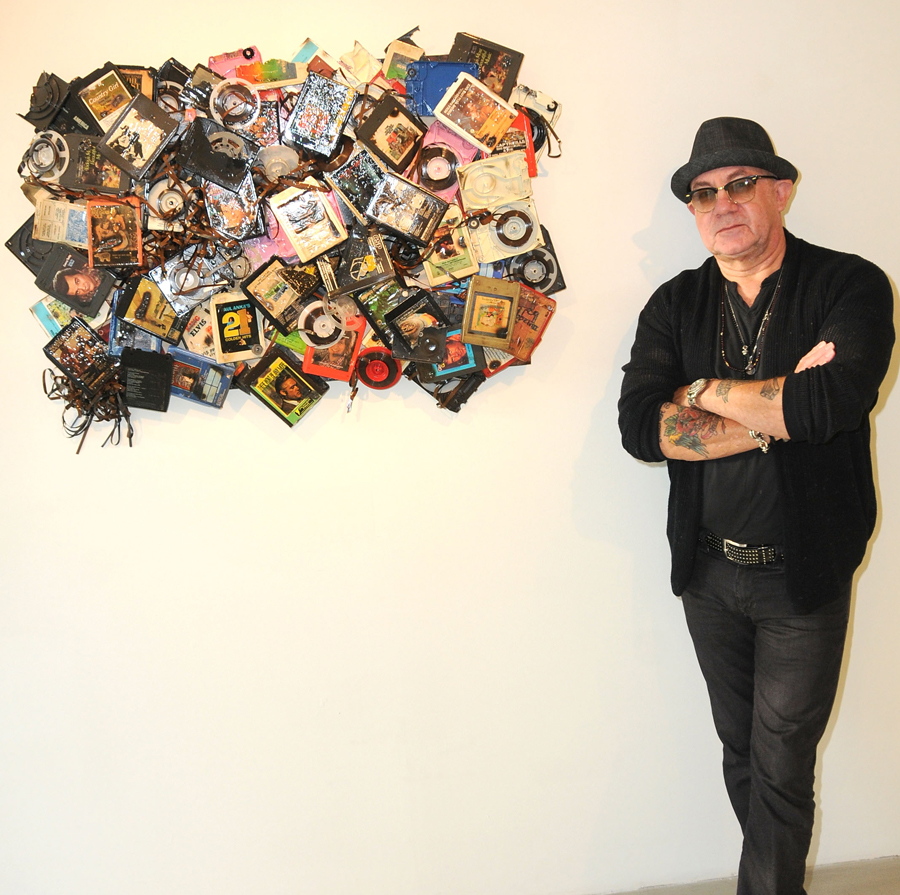 Lyricist Bernie Taupin, photographed next to a piece of original artwork as part of his 2016 'Bernie Taupin's 8' exhibit in Los Angeles, told Zoomer that at this point in his life songwriting is more of a hobby for him than his work in the visual arts. Photo: Barry King/Getty Images

In this time of pandemic, when weeks drag and begin to feel like months, it’s easy to forget that it was actually earlier this year that rocker Elton John and lyricist Bernie Taupin took the stage together at the Golden Globes to accept the award for Best Original Song for their tune “(I’m Gonna) Love Me Again” from the biopic Rocketman. John noted that evening that the Globe marked the first award he and Taupin ever won together for one of their songs — an astonishing fact given their more than 50-year song-writing partnership and their almost unparalleled catalogue of hits. John and Taupin repeated the award feat in the same category a month later at the Academy Awards.

But for all the celebration of the John-Taupin musical partnership over the last year — due in large part to the success of the Rocketman biopic, the “(I’m Gonna) Love Me Again” single and John’s ongoing retirement tour — the pair’s musical output has slowed in the recent years.

Part of the reason is likely because Taupin’s second act involves trading his pen for a paintbrush. More than two decades ago, the famed lyricist converted an old racquetball court on his property in California’s Santa Ynez Valley into an art studio to create abstract artworks that include paintings and mixed media creations evoking everything from music to Americana that have found homes in galleries across the continent.

“[Music] has become just my sideline and my hobby. This [art] is my life,” Taupin told me in a 2013 interview ahead of a display of his work at Toronto’s Liss Gallery. “Luckily, somebody as magnificent as Duke Ellington said, ‘Everybody should do two things.’ And I believe totally in that.”

To celebrate his 70th birthday today, we look back on Zoomer’s 2013 interview with the artist, in which he explains why he’s more intense as a painter than he ever was as a songwriter and what never to say to Bernie Taupin at an art gallery.

MIKE CRISOLAGO: Most people know you for your success in music. Where did your love for abstract art begin?

BERNIE TAUPIN: I don’t really think it was until I’d come to [America] and I was in my early 20s. I spent a lot of time in those days on the road touring with Elton, so I lived a very transient kind of life. I’d have a lot of time to kill [and] I would end up spending a lot of time in museums and art galleries. I was increasingly drawn to the museums of modern art and all of the other galleries that dealt in abstract expressionism. And [laughs] I suppose to put it in a nutshell, it was ‘I’d like to have a go at this.’

MC: But it took a while before you actually began painting yourself.

BT: There was nowhere I could be settled enough that I could actually put my hand to it and really start creating. It wasn’t until much later on – I’m talking about maybe 25 years ago – when I finally felt that I was settling down in my life and I found this home that I live in now. And I started toying with the idea: this could be the time.

BT: I think that, for me, abstract expressionism is the perfect counterpoint to songwriting – especially my kind of songwriting. They come from the same place. They tie themselves to the same ideals.

I think I’m much more at home in the arts now as a painter. I don’t write songs on the level of intensity that I do when I paint. I paint pretty much 80 per cent of the time and I write songs when we make a record, which is probably every couple of years unless I’m doing a film project or something. So the songwriting thing is far more of a hobby than the art side of things.

MC: You’re more passionate now about painting than you were about writing, even in those early days?

BT: Oh yeah, I’m much more intense as a painter. I was a little cavalier in the early days as a songwriter. I mean, I just felt that maybe I just threw it out a little too easily. I don’t know – maybe it came to me easily, but I was a whole different person back then. At that point in time, [I had] that sort of, ‘Well, it’s me and Elton against the world.’ If I go back on a lot of those early songs, there are things I would probably like to spend a little more time on and I could probably improve on them, and people probably wouldn’t necessarily agree with that.

MC: From the standpoint of getting a fair chance as a painter, would it have been easier to approach this new medium if you weren’t “Bernie Taupin, the famous songwriter”?

BT: Probably. I don’t know if I’d had the opportunities. It would have been a harder slog to get recognized, but you know at the same time there’s this stigma attached to anybody who’s in any form of the arts who tries to do something else. It’s like musicians who want to act or actors who want to sing. And it’s the same with anybody in music who wants to paint. And believe me, there are dozens of them. There are a lot that are very, very good – people like Joni Mitchell, John Mellencamp, Captain Beefheart. I’m not putting myself in that category but I feel I have something to say and I should be given the opportunity.

MC: So it goes both ways.

BT: Sometimes you just can’t win. You’re never going to be hanging in the Museum of Modern Art or the National Gallery. So, you have to learn to live with that. Although I never say never. I keep chipping at the wall and trying to break it down because I take what I do very, very seriously.

MC: Where do you draw your inspiration to create art, and has that changed over the years?

BT: When I first started sort of invading the art galleries of New York back in the early ’70s, it was the usual suspects – people like de Kooning and Rothko. But there were other people: Clyfford Still, Lee Krasner, Joan Mitchell. Also the German painter Hans Hofman. If you see a lot of my earlier abstracts, they’re very much in that Hofman style. It was never my intention to crib off other artists. I always felt that I needed to concentrate on finding my own originality, but these were the people that instilled the passion for that kind of art in me.

BT: If you see the newer work I’m doing, there’s still the mixed media in there, but there’s more of what I call the pop art movement in there. A lot of very, very bright colours, symbolism, like targets and flags and I’m using a lot more text now, which I didn’t do purposely in the early days because I didn’t want my painting to sort of have any over-intentional reference to my songs. And now I’m throwing a lot of text in there that, again, is included to make people think.

MC: How nerve-wracking is it to enter a gallery of your own work and have people evaluating it?

BT: There are different levels of emotion that I go through. One of the things I do love – it’s akin to when you’ve wrapped up an album – [is] to see my work on the walls of a good gallery, well lit, curated the right way. There is a very deep sense of achievement. Is it daunting to have people looking at it and assessing it? Well, that really comes with the territory so I’ve learned to live with that now in the same way I’ve learned to live with letting my art go.

MC: What should someone never say to Bernie Taupin at an exhibition of his work?

BT: There are paintings that ask questions, and people [ask], ‘Well, what do you mean by that?’ And I’m saying, ‘No, do you see the question mark? It’s asking you the question. You come up with the answer.’ [Laughs] With an abstract, people have to look into it and draw their own conclusions, and that’s the same with my songwriting. Paul Simon said that sometimes people ask him what he meant by a song, and their interpretations are far more interesting than what his intention was in the beginning. And I totally subscribe to that.

MC: Going forward, what are your creative goals when it comes to your art?

BT: I think I’ve achieved my goal in finding a distinct enough style that I’m satisfied with. Obviously, I want to improve as a painter. I want to encourage myself to come up with new ideas and challenge myself to be better. No matter what we do I think we can always find ways to improve upon how we are. And I have a set of paintings – quite a number of paintings that have never been shown, which are trilogies: three paintings on a certain subject. And I’ve never shown those because I don’t think we’ve had a gallery big enough yet to incorporate everything. I think that they deserve their own show because they are paintings that I’m very, very, very proud of. Other than that, I’m pretty happy where I am right now. I think I’ve come to the point where I’m pretty confident as an artist and satisfied with my lot.

2020 Golden Globes: From Elton John and Bernie Taupin to Ellen, Our Favourite Moments

Elton John on Diana, Paul McCartney and Other Celebrity Encounters in His New Memoir, Me