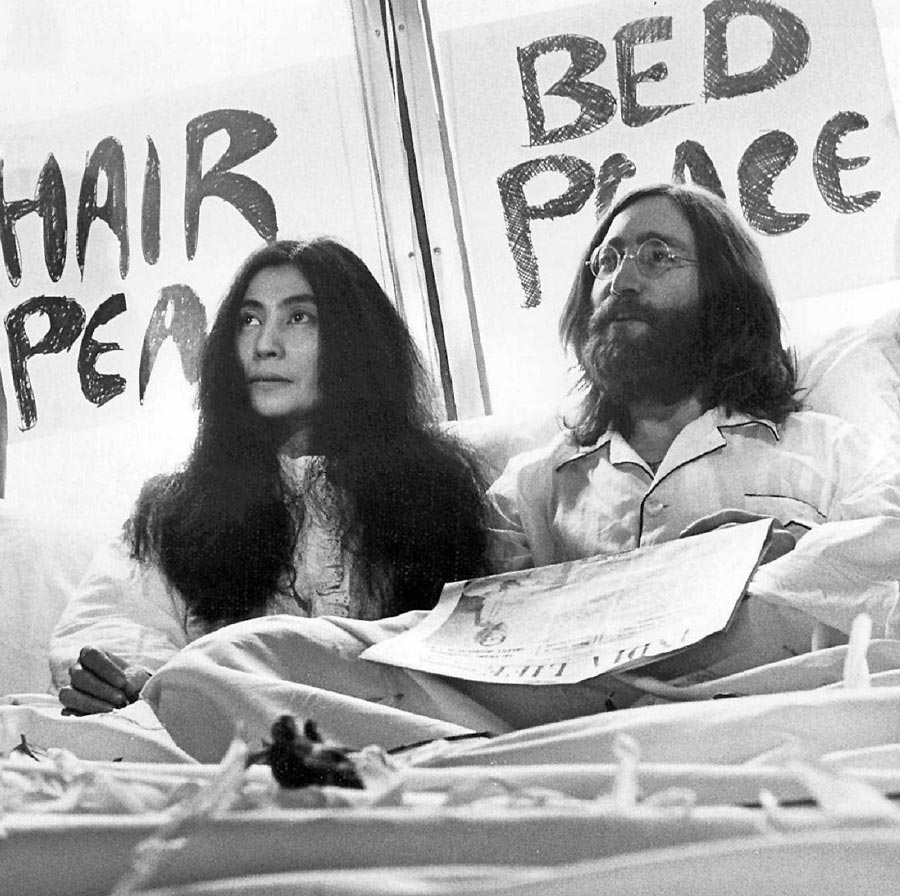 John Lennon and his wife Yoko Ono begin a seven day bed-in for peace in a Montreal hotel May 27, 1969. (Montreal Gazette) The Canadian Press Images/Montreal Gazette

This article was originally published on May 24, 2019.

This week marks the 51st anniversary of John Lennon and Yoko Ono’s Montreal Bed-In, which saw the couple famously settle into a suite of hotel rooms on May 26, 1969 while inviting the global press — and some famous friends — to join them. The event gave birth to the enduring anti-war anthem “Give Peace a Chance” (written and recorded live late one night in the hotel room), has been satirized on The Simpsons and is now stamped onto a silver coin from the Royal Canadian Mint.

At the time, Lennon and Ono were the focus of intense media attention and pursued with a paparazzi frenzy not seen since Elizabeth Taylor and Richard Burton earlier in the decade. So shortly after the counterculture power couple married in March 1969, they decided to put that celebrity attention to good use and turned their notoriety into a non-violent protest by staging a series of Bed-Ins for Peace. For the Japanese avant-garde artist, there was also the durational performance-art angle. As Ono would later remember, “We thought it was a great practical joke that most of the world’s headline newspapers, especially the European and British, was: ‘Married couple are in bed.’”

The Bed-In campaign actually began in their honeymoon suite at the Amsterdam Hilton. From there, due to Lennon being unable to enter the U.S. because of a prior pot conviction, it continued in the Bahamas. But the climate was too hot for their liking and too far removed from major media outlets; after an overnight stop in Toronto and with Ono’s five-year-old daughter Kyoko in tow, they headed to Montreal. Once settled in a corner suite at Montreal’s Queen Elizabeth hotel (now called Fairmont The Queen Elizabeth), they invited the press to join them to bring attention to their opposition to the war in Vietnam.

Behind-the-scenes, fly-on-the-wall documentaries of celebrities are commonplace now, but Bed Peace, the 70-minute documentary Lennon and Ono directed chronicling that period of their Campaign for Peace was groundbreaking in its access to both the famous and the banal. Their hundreds of visitors in Montreal included Petula Clark, activist Dick Gregory and comedian Tommy Smothers to cultural figures like Murray Kauffman, Al Capp and Timothy Leary. (Not everyone was on their side — cartoonist Capp, for one, called the project a gimmicky publicity stunt.) But engaging in dialogue was crucial.

The documentary “Bed Peace,” about the Montreal Bed-In, directed by John and Yoko and filmed by Nic Knowland.

And as the introduction to the documentary explains, “They approached the task with the same entrepreneurial expertise as an advertising agency selling a brand of soap powder to the masses. John & Yoko’s product however was PEACE, not soft soap, and they were determined to use any slogan, event and gimmick in order to persuade the World to buy it.”

Over the course of eight days, with their bed pushed up against the window and surrounded by vases of blowsy white chrysanthemums and carnations, they wore white pyjamas to conduct interviews with reporters, have conversations with guests and friends, read the newspaper and order room service. Local Montreal rock station CFOX interviewed them daily, for commentary on everything from sweatshop labour to the police violence on student protesters at Berkeley. They hung the walls with hand-drawn signs of sketches and phrases like “Murray the K Comes on Monday” and “Bed Peace” (the latter original poster later sold at Christie’s auction for US $154,000).

Much of the Montreal Bed-In was also documented by the late photographer Gerry Deiter, on assignment for Life magazine, in images that remained unpublished for more than thirty years because the story was pre-empted by the magazine for breaking news.

On the penultimate day of their stay, local music producer André Perry was enlisted to record what would become one of the era’s most famous anti-war anthems, “Give Peace a Chance.”

As Lennon strummed his famous 1964 Gibson (on which over the course of the week he’d drawn caricatures of himself and Ono) they invited everyone assembled in the room to join in. Clapping and stomping and singing the chorus of rhyming wordplay, riffs and puns, it was a playful song with serious purpose. The single dropped July 7, 1969, and ultimately peaked at number 14 on the Billboard charts. It also marked the first non-Beatles release for Lennon, who was still technically a member of the Fab Four at the time.

Canada’s part in this major pop culture moment, however, didn’t end when the couple checked out of the hotel. After a failed attempt to meet with Prime Minister Pierre Trudeau in Ottawa, Ono and Lennon returned to Canada that December for a meeting and to hold a press conference to close their peace campaign.

Today, the Bed-In suite at Fairmont The Queen Elizabeth has itself become a tourist attraction. A recent renovation includes reproductions of protest placards, archival photographs and clippings to honour its famous one-time occupants and their hopeful campaign. The lyrics to “Give Peace a Chance” are embossed on the walls, albeit in tidier handwriting than the hasty scrawl Lennon used to put up the words as he lead a motley group of strangers in a song to change the world.

As Ono says in her introduction to Bed Peace:

“Let’s remember WAR IS OVER If We Want It.

It’s up to us, and nobody else.

John would have wanted to say that.”

75 Facts About John Lennon On the Anniversary of His Death