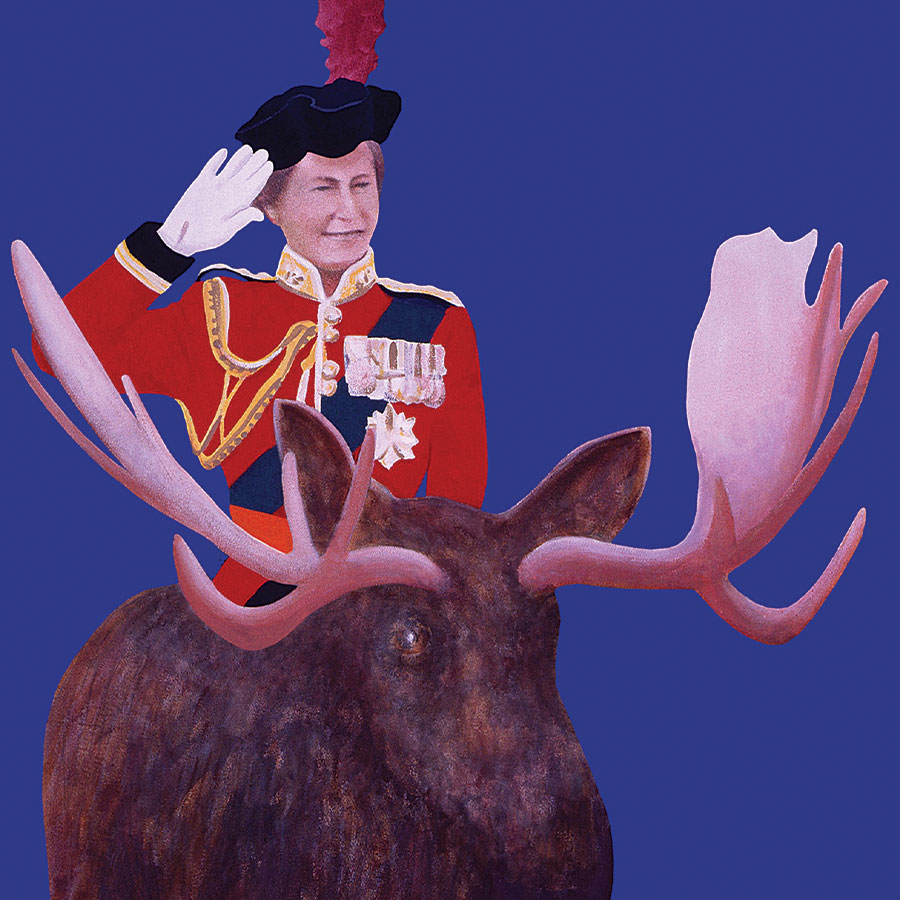 In honour of Queen Elizabeth II’s official birthday, we look back at our 2012 story about the inimitable Charles Pachter and his unique interpretation of the monarch’s role in our nation’s psyche, by David Lasker.

Never mind his Order of Canada (promoted to Companion in January). Don’t bother about the glossy coffee-table book showcasing his oeuvre. Pay no attention to his one-man shows in China, England, France, Germany and India. Disregard his Hockey Knights in Canada murals in Toronto’s College Street subway station and his Canadian flag paintings hanging in Parliament. No matter that his work cracked the $100,000 art-market barrier. So what that he recently refused a substantial offer for Pachter Hall and Moose Factory, his striking, contemporary home-cum-gallery in Toronto’s Chinatown. Let’s ignore M Is for Moose: A Charles Pachter Alphabet and his other popular kids’ books.
Despite his success, Charles Pachter feels that he hasn’t yet received his due. The painter, printmaker and writer is renowned for his familiar images of the Queen on a moose and the maple-leaf flag rippling in the wind that convey an image of Canada to Canadians and to the world. As Christopher Hume wrote in the Toronto Star, “Pachter’s works address larger concerns that speak to a wider audience than perhaps any other artist in Canada.”

Short, compact and built like a fireplug, still a cheeky enfant terrible, the fire in his combative belly was still burning bright during our interview. “I’m turning 70. Will someone please do the retrospective? Why didn’t Canada Post issue my Queen on the Moose stamp in honour of the Diamond Jubilee? And why, with iconic images that probe the psyche of a country, aren’t my works in the National Gallery of Canada?”

Offering a dish of mandelbrot, made with cinnamon, corn flakes, eggs and butter — “Jewish biscotti but softer and richer” — he gestures grandly while asking rhetorical questions. “In a country whose artistic heritage is decorative landscape — the Group of Seven, Tom Thomson, Emily Carr — could Canada have invented an Andy Warhol or a David Hockney? And does such an artist exist in our country? What is it about the English Canadian mindset that made celebrity and ambition into frowned-upon pursuits, the ‘Who do you think you are?’ syndrome.

“Moses [Znaimer, founder of ZoomerMedia] has collected my work since the ’80s — as have the Montreal Jews, including the Bronfmans. But the Toronto goyim [non-Jews] never got it, with a few exceptions. Bluma [Appel, the late philanthropist] used to say, ‘You are light years ahead of the other artists in the country, but you’ll be dead before you’re appreciated.’ ”

His sense of displacement dates back to his childhood in suburban North York, when his was the only Jewish family on the block. “I remember coming home and asking my parents at age five why we didn’t have pictures of the baby Jesus like the other kids. My mother said to my father, ‘Harry, say something. You tell him.’ ”

Regarding his best-known image, the Queen on the moose, he says, “In art history, there is a precedent for this mystique about women and animals. There’s Europa and the bull, Diana and the faun, Lady Godiva naked on the horse. In grade school, we were taught that the moose was the monarch of the north, so I confused the word ‘monarch’ when I was 10 and the CBC broadcast the coronation [of Elizabeth]. This pretty young princess being crowned with diamonds, emeralds and ermine was the biggest thing to happen in popular culture in Canada.”

Those memories simmered until 1972 when he “had one of those epiphanies. I heard that the Queen would come to Canada to open the new Shaw Festival Theatre. That’s when I thought of putting her in a Canadian setting, trooping the colour on a Canadian moose. I went into a creative frenzy, finishing 15 or 20 paintings on that theme. Then my dealer said, ‘I won’t show these and I don’t have to tell you why.’

“I was devastated but, in a stroke of fate, I had just bought my first house, filled with draft-dodger tenants coming up from the States weekly. So I went ahead and renovated it and started my own show, called The Other Shaw Festival, which opened on the same day the Queen launched the Shaw Festival Theatre.”

The scene: a lady friend sat in a Rolls-Royce, with hat and gloves, doing the royal wave all afternoon. Margaret Atwood and other friends poured tea on the lawn. Greg Curnoe, Joyce Wieland and many other artists showed up. “It was a lovely ’70s happening,” he recalls. “I had turned 30, and here I was being mischievous. Andy Warhol would have approved. United Press International, Associated Press and Reuters picked it up; newspapers from as far away as Johannesburg and Los Angeles reported it: ‘Canada in Royal Rage Over Queen on Moose.’ ‘Monarchists Threaten to Slash Canvas.’ ‘Artist Warned to Stay Indoors.’ It was all trumped-up newspaper nonsense, but ‘Queen on moose’ became a generic term, fixed in people’s minds. It made me realize that it was okay to create a branded image and to make art that people wanted.”

Later, says Pachter, in an Oedipal moment, he decided to remove the Queen. “I did a whole series of moose in Chagall-like settings, fanciful capricious images of the moose doing daring stunts, jumping off a skyscraper, a cliff, a diving board and on a tightrope over the CN Tower.” In his quest to find symbols that are uniquely Canadian, he also focused on butter tarts, a whole series, State of the Tart. “Because, unbeknownst to many people, the butter tart is unique to Canada.” And then, came the flag. “One night in 1981, I saw a flag flutter in the wind while I was lying in the hammock on my farm north of Barrie. I painted a series of flag paintings. I had my most glamorous opening ever, the night after Trudeau announced the patriation of the Constitution, with Barbara Frum, Pierre Berton, Jack McClelland, Betty Kennedy, the who’s who of the Toronto arts scene of the ’80s.”

However, when Pachter’s subsequent Regarding the Flag show opened at the Ontario Science Centre, in 1985, one critic dismissively wrote, “More over-the-couch art for the walls of patriotic dentists.” Pachter remembers how the newspaper received letters from irate dentists saying, “What am I, chopped liver? Aren’t I allowed to like the Canadian flag?” It became quite funny, he adds. Another throwaway newspaper critique he received: “Is this what art is all about? Boyish jokes?”

But Pachter’s sense of humour was and remains fully intact. “Local newspaper critics, often with double-barrelled or hyphenated names, were relentless in trying to invalidate me,” he says. “That’s when I invented this fake art critic with the hyphenated name who loves my work, Don Rouge-Humber. The name derives from three Toronto rivers, get it? I would take out ads in the Arts sections, and Don would wax poetic about my work: ‘So stunning, words fail me’ and ‘A legend in his own mind.’ ”

Pachter’s other archetypal images include the barn, resembling a bright-red Monopoly house. His Barns Exhibit jokingly coincided with the AGO’s 1994 exhibition of Impressionist art from Philadelphia’s Barnes Collection. But his first Canadian image was the street car. “At the Isaacs Gallery in 1972, I did a whole show of street cars, which launched me as a pop symbolist. I took the Red Rocket and turned it into a sleek, elegant allegorical form or shape not unlike what Warhol did with the Campbell’s tomato soup can.”

Waxing reflective, he ruminates, “I’m very grateful to have lived a happy life on my own, unfettered by other people’s opinions about what they think I should be doing. This is a time of great serenity. And if I don’t get enough esteem, I’ll get a hair transplant and elevator shoes.”

A version of this article appeared in the June 2012 issue with the headline “Portrait of the Artist.”

“Never Give Up, Never Despair” The Queen’s V-E Day Message Resonates 75 Years After the War

Crowning Moment: Celebrating the 67th Anniversary of the Queen’s Coronation