Baking and Football? How Prince William Might Celebrate His Father’s Day Birthday 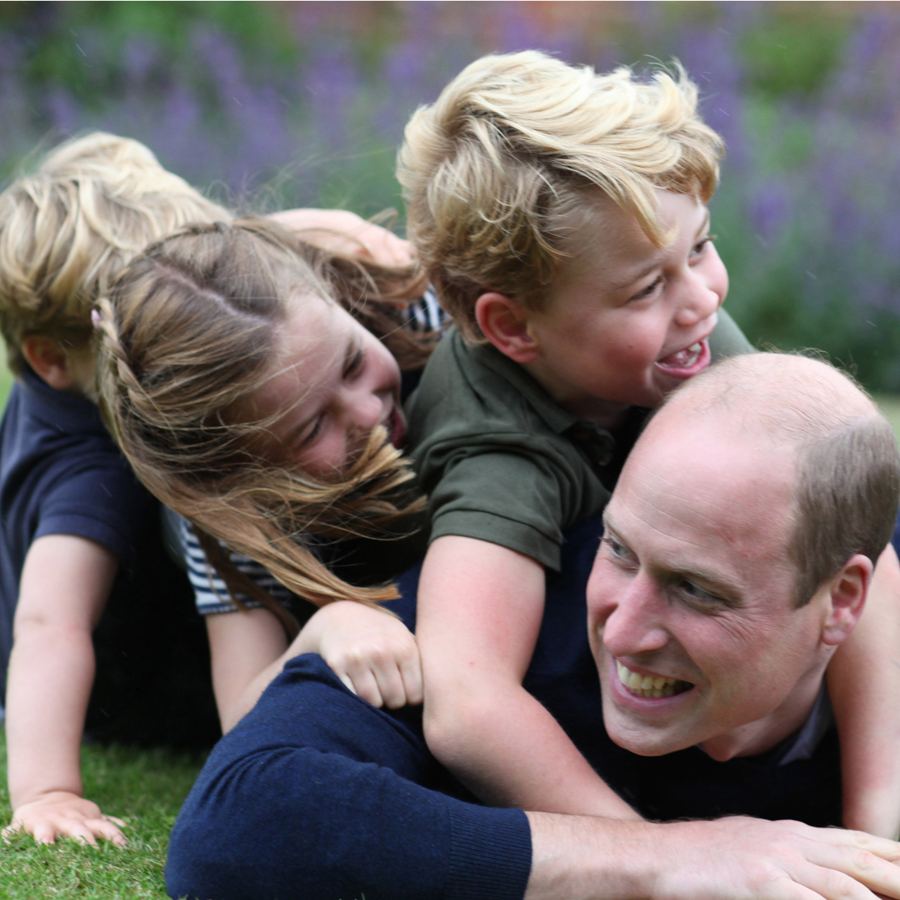 The Duke of Cambridge plays on the grass with (R-L) Prince George, Princess Charlotte and Prince Louis to mark both his birthday and Fathers Day. Photo: The Duchess of Cambridge/Kensington Palace via Getty Images

Sunday marks both Father’s Day and Prince William’s 38th birthday, and in honour of the occasion Kensington Palace released two photos of the royal romping around with his three kids — Prince George, 6, Princess Charlotte, 5, and Prince Louis, 2 — photographed by Kate Middleton, the Duchess of Cambridge.

Both images were shot in Norfolk, at Anmer Hall where the family is isolating during the COVID 19 pandemic. The first photo shows the three kids crawling all over their dad in the grass.

The second shot, posted to the Kensington Royal Instagam account, shows Prince William on a swing with the three kids. Of course, in most households, celebrating your birthday on Father’s Day would grant the birthday dad the title of “King for a Day.” But, given Prince William will be king one day, the idea of settling into a makeshift sofa “throne” and wearing a paper crown while chowing down on celebratory snacks in front of the TV probably doesn’t offer the same thrill as it might for non-future monarchs.

Then again, while French Queen Marie Antoinette is often quoted as saying “Let them eat cake,” the future British king seems to possess a predisposition for making it. As Prince William noted this week in his first public appearance since the global pandemic lockdown began, he’s quite taken with baking.

“I’m worried about the waistline of the nation as well with all the chocolate and cakes,” he said this week while paying a royal visit to ambulance workers at the King’s Lynn Ambulance Station at Queen Elizabeth Hospital. “I’ve done a lot of baking at home. Chocolate goes down very well.”

The comment conjures images of the future king of England — monarch of the United Kingdom and the entire Commonwealth — standing at his kitchen counter, up to his royal elbows in eggs and flour, as he tirelessly stirs cake mix while the other future king in the house, Prince George, tugs at his pant leg and begs repeatedly, “Daddy, can I lick the spoon?”

In fact, during a trip to Smiths the Bakers — the official bakers to the royals — in Norfolk this week, Hello Canada notes he brought up baking again, telling the establishment’s owners that, “I’ve done a little bit of baking. The children have been attacking the kitchen and it’s just been an explosion of flour and chocolate everywhere. Catherine’s been doing quite a bit of baking.”

There’s a joke in there somewhere (something along the lines of “How many royals does it take to bake a cake?”), but it was no laughing matter when the ever-thoughtful royal father told the bakery owners, “I can’t come in here and not buy anything, so have you got any pain au chocolat at all? Have you got any more by any chance? My children will not talk to me if I turn up without enough.”

Hello Canada adds that the bakery, in fact, only had four of the chocolate treats on hand, so Prince William bought a plain croissant as well (and no doubt, loving father that he is, took it for himself).

But of course, we do know how many royals it takes to bake pudding, as exhibited in the video below of Queen Elizabeth II herself joining heirs Prince Charles, Prince William and Prince George last December to publicly prepare Christmas pudding. If you want a laugh, skip ahead to the 40-second mark, when Prince George begins pounding the pudding furiously, causing the Queen, who is wearing a white dress, and Prince Charles to scatter. In the child’s defence, however, who wears white to bake with a six-year-old?

The Prince of Zoom

The Hello Canada story also notes Smiths the Bakers presented Prince William with “a vanilla sponge cake with white icing, cream and jam” for his birthday that included the words “Happy Birthday Prince William from all at Smiths the Bakers” and ornamentation including “iced football boots, footballs and Union flags.” As well, they also gifted him “a loaf of Norfolk crunch bread and a jar of Sandringham loose tea.”

There is, however, one element of Prince William’s Father’s Day birthday that baked goods can’t help fix. The Duke of Cambridge  is reportedly saddened that the COVID-19 pandemic is preventing him from seeing his extended family on his birthday — particularly his father, Prince Charles, who is isolating at Clarence House and recently carried out his own royal in-person visit to meet with frontline workers.

The Daily Mail quotes royal expert Katie Nicholl telling Ok! Magazine,  who says that, “I know that William has told his friends that he’s loved spending so much time with the children in lockdown, but that’s been coupled with the sadness that he’s not seeing his father. Charles and William have become much closer in recent years. In fact, I’ve been told by someone who knows them both very well that William has had something of a mind shift. Where the notion of becoming king one day used to overwhelm him, he’s now more than ready and has found common ground with his father in that. Their destiny is something that now connects them.”

Video conferencing, however, has proven a favourite of the future king and he’s kept quite busy on it, doing everything from speaking to teachers and hospital workers alongside the Duchess of Cambridge to talking with youth volunteers and putting in a surprise call to a family isolating at home in Northamptonshire.

And who can forget the Zoom call where Will and Kate called bingo for a senior’s care home in Cardiff, Wales — particularly the end, when the eventual winner critiqued the couple’s bingo calling skills as “very good,” but not “as good as it should have been.” In the old days, a quip like that to a royal would have landed you in the Tower of London. In 2020, however, Prince William laughed and noted, “We’ll try and do a bit better at bingo next time.”

Prince William may be of royal blood, but he’s also a human being. And, like many of us, it seems he can’t wait for life to get back to normal. And also like many of us, he could really go for a pint.

“I’m looking forward to getting that government message that we all have to drink more,” he quipped during his visit to Queen Elizabeth Hospital. “Go support your local pub.”

As well, the avowed fan of Aston Villa football club was clearly thrilled with the return of England’s Premier League this week, sending out the message across the Kensington Royal social media accounts: “So good to have football back, we have all missed it! Thank you to everyone involved for your hard work in making it happen. W”

And speaking of Aston Villa, like many dads Prince William has passed his fandom down to his kids, as evidenced by the family outing the Duke and Duchess of Cambridge enjoyed last year with Prince George and Princess Charlotte, attending an Aston Villa match against Norwich City.  Aston Villa won the game 5-1 and Prince George was captured on camera having a blast as he joined his dad in celebrating their favourite club when they’d score a goal.

And, of course, we’ve watched the prince over the years as he grew into his role as a father, from loveable moments of doting over his three children to the relatable struggles of trying to fix a carseat or soothing crying kids in public. In the end, being a parent is no easy task — even when you do have household staff to help out.

But, in the end, Prince William’s Father’s Day birthday is shaping up to include time with his family, as well as sports, beer and cake. Especially in the midst of a global pandemic, when we’ve all been locked down and largely isolated for months, that sounds like a celebration that we could all get on board with — (future) king or commoner alike.