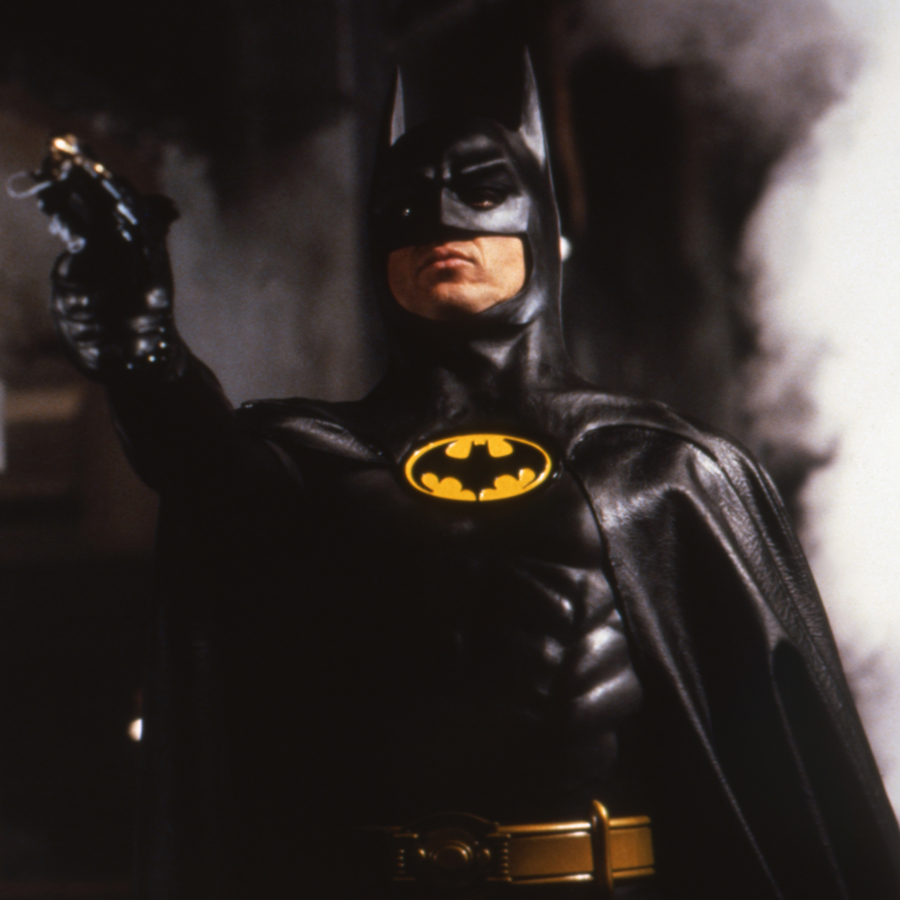 Michael Keaton on the set of the 1989 film 'Batman' Photo: Sunset Boulevard/Corbis via Getty Images

There’s no better illustration of this fact than in the 2014 comedy Bad Neighbours, starring Canuck Seth Rogen and actress Rose Byrne, who play a young couple who buy a house in a quiet suburban neighbourhood to raise their newborn child only to have a frat house, led by Zac Efron, spring up next door.

In one scene, as Rogen attempts to bridge the generation gap between him and Efron, he asks his younger counterpart, “Hey, who’s Batman to you? When you think of Batman, who’s Batman?”

“Are you kidding me?” Efron responds, as if the question is so ridiculous it’s almost not worth answering. “Christian Bale.”

Rogen replies, “Michael Keaton is Batman to me.”

The pair then break out into hilarious duelling impressions of their respective Batmen, which you can watch in the video below, including Keaton’s legendary “I’m Batman” line, which has been repeated over and over in pop culture for more than 30 years since he delivered it.

The question of “Who’s Batman to you?” is such a perfect yardstick for measuring a generational understanding of pop culture and a relevant one this week, given the news that Keaton, 68, is in talks to return as an older version of Batman in upcoming DC films including The Flash.

Batman’s first appearance on screen actually occurred in 1943 in the theatrical serial Batman, starring actor Lewis Wilson under the cowl. In 1949, actor Robert Lowery took on the role for the sequel serial, Batman and Robin. Between 1966 and 1968, Adam West famously began his television tenure as the grey and blue-outfitted campy caped crusader who beat up a comedy roster of villains each week as comic-book exclamations of “Bam!” and “Pow!” flashed across the screen. He was also known to drop a few corny dance moves every now and then. West also starred in the 1966 film based on the TV series.

Fast-forward a few short decades to 1989, when Michael Keaton debuted in Tim Burton’s darker, edgier Batman, outfitted in black armour to battle Jack Nicholson’s legendary Joker in a film set to an exquisite Prince soundtrack. Val Kilmer and George Clooney followed in largely forgettable 1990s sequels Batman Forever (1995) and Batman & Robin (1997) before Christopher Nolan resurrected the franchise with an even darker, more true-to-the-comics version of Batman. Those saw Christian Bale beneath the cowl for three films, beginning with Batman Begins in 2005, The Dark Knight in 2008 and The Dark Knight Rises in 2012. Ben Affleck took on the character in Batman v Superman: Dawn of Justice and Suicide Squad, both in 2016, and the 2017 film Justice League. And now, Twilight vampire Robert Pattison is turning back into a bat to play the caped crusader in 2021’s The Batman. And that, is, of course, in addition to actors who played animated big-screen Batmen like Kevin Conroy (Batman: Mask of the Phantasm, 1993) and Canadian Will Arnett (The Lego Batman Movie, 2017) and the slew of performers who’ve starred as the hero in the various animated TV shows over the years.

It’s easy to see, then, how different generations, beginning in the 1940s, grew up with different iterations of Batman. But in this moment, 1990s nostalgia is in full swing, and my generation, born in the 1980s, identifies with Rogen’s character in Bad Neighbours. For me, Keaton is peak Batman nostalgia. Though I enjoyed reruns from the 1960s, Adam West was before my time. And by the time Christian Bale came around, I was an adult watching as a long-time fan. Keaton, though, hits that nostalgic sweet spot. He was the one I gazed up at in awe, as a nine-year-old, on the big screen in the since-demolished Uptown Theatre in downtown Toronto. He was the face of my action figures and movie posters. He’s the one who uttered the famous “I’m Batman” line while dangling a hapless criminal from a Gotham City rooftop. And he’s the one I geeked out over in 2018 when a video of Keaton delivering a commencement address at Kent State University went viral after he concluded it with, “I’ve got two words that I want you all to remember. They’re very important and, if I leave you with anything, I’m going to leave you with these two words. And those two words are: I’m Batman.”

Keaton also represented a transitional Batman as far as how the character was presented on television and in film. Before he debuted in 1989, many people at the time who weren’t avid readers of the Batman comic books thought of the character as the campy Adam West version. For TV and film fans, Michael Keaton’s Batman helped usher in the idea of a darker, more introspective superhero haunted by the murder of his parents – a man who lives his life in the shadows and, most importantly, never, ever dances. Post-Keaton, Batman veered back toward that sense of camp – especially in 1997s forgettable Batman & Robin, where George Clooney’s Bat suit came equipped with the infamous Bat nipples as well as ice skates. The latter popped out from beneath his boots when Batman smacked his heels together while the former were, regrettably, always on full display.

And if Keaton were to return to play Batman, he’d certainly set a benchmark when it comes to aging in superhero films. To start, the actor turns 69 this September and, as he’s still reportedly in talks to play the part, he’d be at least 70 by the time he suits up. And a greying Batman could prove a fascinating character – a man consumed by the tragedies of his past who is also physically broken down from years of crime fighting yet still willing to pull on his suit and play the hero. Perhaps he’ll require a Bat cane or a Bat walker to help with the fallout from all of that wear and tear, not to mention some Bat painkillers. Suffice to say, his famed utility belt will probably look more like a pill divider box than a crime-fighting kit at that point.

As well, while some actors have gone decades between playing the same action movie hero — Sylvester Stallone as Rambo and Arnold Schwarzenegger as the Terminator come to mind — Keaton would also likely set a record for an actor with the longest amount of time between portraying the same superhero. That’s, of course, because playing superheroes is usually a young man or woman’s game. Keaton last played Batman in 1992 (Batman Returns), so by the time he suits up again (if he does so), we could be looking at around 30 years between playing the part.

And for those who aren’t keen on seeing an older Batman, keep in mind that Batman debuted in 1939, so he’s at least 81 years old already. And if you go by Batman comic-book canon, which suggests that Bruce Wayne was around 25 years old when he became Batman, then, technically, the character is a centenarian. So a 70-year-old Keaton playing him is actually at least a 30-year de-aging of the character.

Of course, Keaton playing Batman again may never come to pass. But if it does and he shows up in cape and cowl in a DC film down the road, and another character spots him and asks, “Who are you?”, you better believe there’s going to be a generation of fans sitting on the edges of their theatre seats, eagerly awaiting that legendary two-word answer.

Gee Willikers, Batman is 80! The Dark Knight Was at His Best When He Wasn’t Quite So Dark

Long Before Joker, How We Started Fearing Movie-Inspired Mayhem in the 1950s