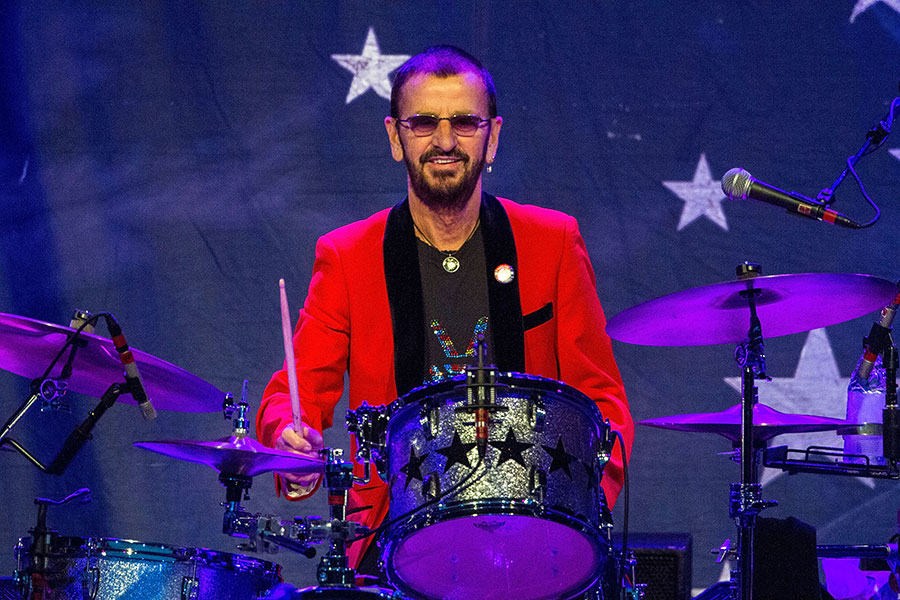 With the pandemic putting a damper on his usual birthday bash, Ringo Starr celebrated his 80th trip around the sun on Tuesday night with a “little help from his friends” — digitally of course.

The former Beatle, who typically throws a birthday bash outside of Capitol Records in Hollywood, opted for a digital star-studded shindig featuring at-home performances and never-before-seen concert footage streamed live on his Youtube channel.

“This is a bad year to host a get together of any kind,” Starr said from his studio where he hosted the event. “So I’m celebrating with my friends in a new way this year. We’re going to have to keep our distance due to the coronavirus.”

“I can write it all, but I can’t end it, so he’d end my songs for me,” Starr said of his late bandmate.

Other notable performances included a long-distance drum duet with Sheila E. for “Come Together” with a Jesse Jackson speech and a snippet of “Revolution” mixed in.

Paul McCartney appeared in live footage from Dodger Stadium last summer, almost exactly a year ago when Ringo joined him on drums for a rowdy version of “Helter Skelter.”

And perhaps the most fitting song of the evening was “With a Little Help from My Friends,” performed live last year with his All-Starr Band.

Also providing a “little help” with the celebration were a number of fellow musicians, friends and family that sent in video tributes wishing the former Beatle a happy birthday. There were tributes from Bettye LaVette, David Lynch, Nils Lofgren, Peter Frampton, Bob Geldof, his great-granddaughter and even 22-year-old Jaden Smith who called him his idol and thanked him for “inspiring me and my entire generation.”

Like most celebrations, this year’s took on a different feel for the artist, who says he’s been hunkered down at home for 11 weeks, trying to stay healthy — only venturing outside for early morning dog walks on weekends.

“This year and the beginning of this year have been really tough,” he told USA Today. “I am disappointed and I’ve had a few down days.”

Regardless, Ringo looked to make a difference with his digital birthday party. In addition to his yearly request for fans to throw up a peace sign at noon on his birthday, proceeds from the show benefitted Black Lives Matter Global Network, the David Lynch Foundation, MusiCares and WaterAid.

Of those causes, Starr says he’s been particularly impressed with the youth infused Black Lives Matter movement — a push for change that no doubt reminds the Beatle of the anti-war movement of the 1960s.’

“What is incredible to me is all the streets of L.A … were filled with 18 to 25 year olds,” he told Cleveland.com ahead of the show. “The next generation are coming up to do it. I think every time there’s a big madness like this things change a little bit. This time we stand a really good chance of them changing a lot. I can only hope.”

The show also featured a Black Lives Matter tribute, which included documentary footage of the Beatles’ early U.S. tours, when they refused to allow segregation at their shows in the South.

“I don’t have to tell you that the Beatles’ early success had a lot to do with the influence we found from American artists,” he continued. “We loved listening to Ray Charles, Little Richard — my hero — Stevie Wonder. Sister Rosetta Tharpe: I saw her live at the Cavern. And my stepdad’s favourite: Billy Eckstine. The list goes on and on.”

As for his own birthday wish, Starr, who was still touring up until the pandemic hit, is hoping to be back on tour by next year.

“Next year, all being well, we’re hoping that the May-June tour can go, but I’m not completely confident about that,” he told Cleveland.com. “I do miss the audience. I miss touring. I love to play with other musicians.”

But even if next year doesn’t bring the excitement of live performances, Starr isn’t planning on letting age keep him from his musical passion anytime soon.

Elton John on Diana, Paul McCartney and Other Celebrity Encounters in His New Memoir “Me”