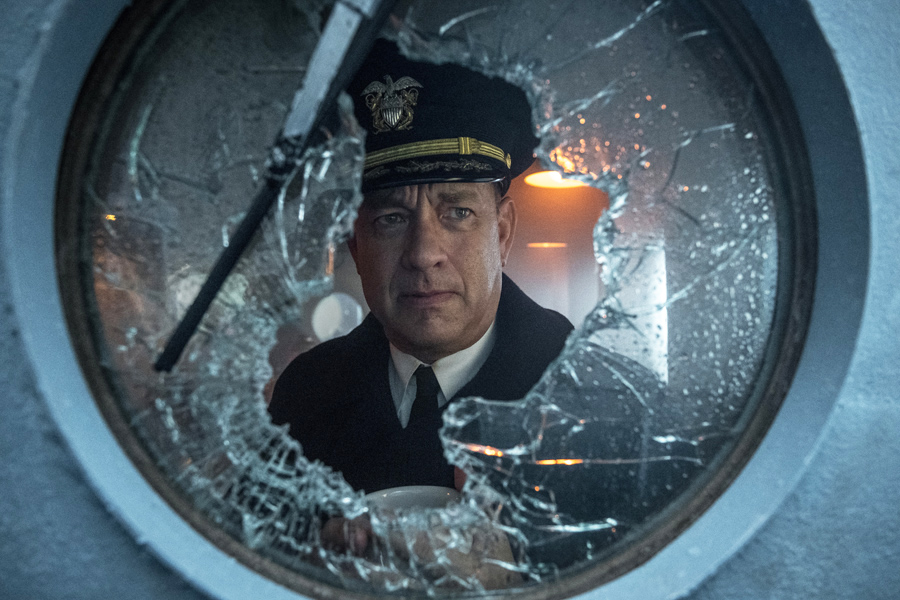 In a virus-free world, Tom Hanks’ new Second World War film Greyhound — in which he stars and also wrote, adapting it from C.S. Forester’s novel The Good Shepherd — would be at a theatre near you, battling it out with Wonder Woman and Tom Cruise.

“We were going to come out June 8, a week after Wonder Woman and a week before Top Gun 2,” Hanks, 64, said in a virtual “round table” interview from his L.A. home last week.

“We were going to be in the midst of a brutal fisticuff battle for screens, for eyeballs, for awareness with a marketing campaign, prints and advertising. And we were going to be essentially the runt of the litter, because we’re not a franchise, fighting tooth and nail just for attention.”

Instead, a movie about fighting an “unseen enemy” under the sea fell victim to an unseen enemy under our noses.

Canaries in the Coronavirus Coal Mine

Back in March, Hanks and his wife Rita Wilson became, as he puts it, “canaries in the coal mine for the COVID-19 experience,” contracting the coronavirus while in Australia, where Hanks was preparing to play Col. Tom Parker in a Baz Luhrmann film about Elvis Presley.

The worst symptoms played out in about 10 days, he says. And truth be told, he looks healthy in a light wind-breaker, a single loud sneeze being the only possible hangover from his recent bronchial adventure.

Production shut down in Australia, and soon, everywhere. Theatres did too. And a blow was dealt to Hanks and director Aaron Schneider’s effort to bring Greyhound, about an untested Navy Commander put in charge of a North Atlantic flotilla that’s being pursued by a pack of German U-Boats, to the screen.

“We are all heartbroken that this movie is not playing in cinemas. It broke our hearts,” he says. Instead, Greyhound is going direct to Apple TV+. He calls the streaming service, “a saviour,” that is allowing the world to see the movie beginning July 10, albeit on a smaller screen than anyone intended.

“It’s going to look different. It’s going to have a different physical quality to the brightness, different sound than it might have if you were hearing it in a cinema with 800 other people.

“The heartbreak is that those 800 people don’t get to go into a theatre as strangers, watch Greyhound, and come out 88 minutes later with something in common.”

It’s well known that Hanks has something of an obsession with war movies and military history, Exhibits A and B being Saving Private Ryan and his producing role in the classic mini-series Band of Brothers. He credits some of that interest to his childhood in and around Oakland, California.

“I lived in (nearby) Alameda when I was a young kid when the Vietnam War was going on. And more than half my classmates had their fathers in the Navy. They were all serving on the Coral Sea and the Enterprise and the Hornet. They served on aircraft carriers.

“And Alameda Naval Base was all of one end of the island of Alameda. I remember going to movies and stuff like that with kids who lived in Navy housing.”

He’s also an avid reader on the subject. He recounts his discovery of The Good Shepherd at a used book store several years ago. “I was attracted to it because it had the original cover. It was of (Hanks’ character) Ernie Krause, grey-haired, undone, exhausted, uniform flapping in the wind, a ship sinking and burning on the horizon as one of his crewmen was tapping out a signal.

“And I thought to myself, ‘That man is exhausted. That man has been through a degree of hell.’ I had a bit of historical knowledge of the Battle of the Atlantic, which this book had been part of.

“About page 3, I realized this was an entire book told through the mental perspective of its protagonist. He’s not the captain you would anticipate being in charge of the safety of all these ships. I had a very strong mental image of the DNA of the story and how it could possibly be the screenplay of a movie.

“As a selfish actor, I want to play great roles. And as a guy who has gone back to World War II again and again (in films), I see direct correlations to life as it is lived right now. I see the same questions being asked and the same solutions being pursued.”

If told right, Hanks believes, Second World War stories are relevant to every time and circumstance — even pandemics.

With its cat-and-mouse on the high seas (including radio taunts from a U-Boat commander) fans of war films might be put in mind of classics like 1957’s The Enemy Below, with Robert Mitchum and Curd Jurgens. Hanks has mixed feelings about those predecessors.

“Here’s the thing about that movie, a fabulous movie, one-on-one, a destroyer, a submarine. Certainly, a typical encounter in the Battle of the Atlantic. Convoys, multiple ships, turning at different speeds, the chaos.

“But you take a look at it, and first of all, all those guys in those Navy ships, they’re much older than they were in WWII. They all look like they’re 35 when in fact the average age of the enlisted man was 22-24.”

Other than Stephen Graham, who plays the Greyhound’s doctor, and Rob Morgan who plays the cook, Hanks and Schneider took pains to cast mainly actors 24 and under. As for himself, he points to his 64th birthday, which fell the day before the film was released. “I think I can play a guy who’s 48 years old… 50… 52.”

His assessment of his own “everyman” appeal is keen. It does not appear to be in Hanks’ makeup to play an action star without self-doubt. He is no Tom Cruise. “I can play an older officer who’s about to retire, but instead becomes part of America’s entrance into the war. His expertise is required, even though he’s only ever done the job theoretically.

“I can play that guy. And I have, in my own realm, the same questions of my veracity and ability as Ernie Krause does.”

As for the future, he says, “I have no idea when I’ll go back to work.” Halted five days before principle photography, the Elvis movie remains on indefinite hiatus.

“There is a possibility that there’ll be some high-tech movies with CGI and individual actors that you could actually make that could be COVID-19 friendly.

“But as far as a movie about interesting people in a car, maybe kissing and talking about interesting things and interacting in the same perspectives as regular life, no one knows when that can start up. That’s the terrible news.”

Tom Hanks Charms as Mr. Rogers in First Trailer for A Beautiful Day in the Neighborhood