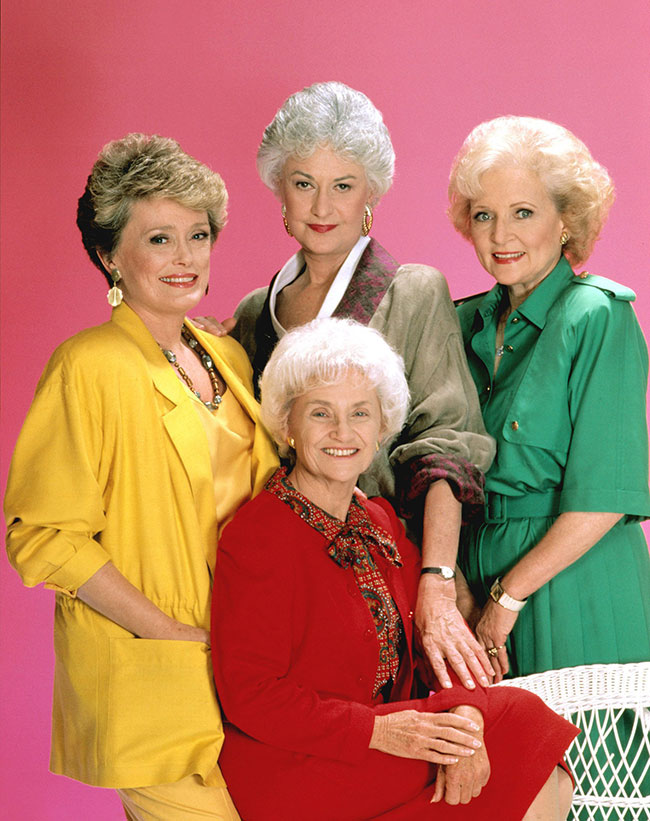 Thirty-five years after The Golden Girls hit network airwaves, we can still learn a thing or two about aging gracefully from the sarcastic quartet. Photo: CP Images/Touchstone/Courtesy: Everett Collection

Thirty-five years ago this week, The Golden Girls hit network airwaves. But the sarcastic quartet with a dash of deadpan ditz (courtesy of the inimitable Betty White as Rose) did not fade gently into the good night. The show lives on as more than just a sassy meme machine. Amazon Prime announced this week that all seven seasons have been be uploaded to the streaming service.

The ever-green scripts also got a reboot this fall with an all-Black cast. During the pandemic, table reads have been all the rage in Hollywood, a Zoom-friendly way of raising money by mobilizing stars and tapping into nostalgia. Our favourite iteration (besides the buzzy Fast Times at Ridgemont High starring IRL exes Jennifer Aniston and Brad Pitt) was the early September version of The Golden Girls.

The all-star cast was lead by Tracee Ellis Ross as Rose, Regina King as Dorothy (the part originated by Bea Arthur), Sanaa Lathan as Blanche (Rue McClanahan) and Alfre Woodard as Sophia (Estelle Getty). This dream team came together for a higher purpose than comedy: the table read took place as part of a get-out-the-vote fund and awareness-raiser on The Zoom Where It Happens. It goes without saying that this foursome barely looks middle-aged, let alone like the senior set the 1985 crew portrayed.

The Golden Girls are having an unlikely moment back in the sun. But what stands out the most about this renaissance is how much our perceptions and the physical manifestation, attitude and meaning of aging have changed since 1985.

A meme that made the rounds in late summer featured Halle Berry in a bikini on a skateboard with the tagline “Age 54 in 2020.” It was twinned to a shot of Rue McClanahan tagged “Age 54 in 1988.” McClanahan had a matronly green print jacket and no-fuss cropped hair. The contrast couldn’t be clearer, nor could the message that 50 looks so very different today. Berry – whose directorial debut Bruised, an MMA flick, walked away from TIFF last week with a $20 million Netflix deal — had a little fun with the then/now concept herself this summer, recreating the Zeitgeist-shaking moment she walked out of the sea in an orange bikini as a Bond girl in 2002’s Die Another Day. Her bikini body has not aged a day in 18 years.

An earlier version of the Golden Girls meme appeared after JLo shook up the Super Bowl with her dazzling (beyond ageless) performance in pre-pandemic January. At the time, the internet similarly marvelled at how JLo compared to McClanahan, the youngest of the Golden Girls and just a year older than JLo was when the series began.

But an even funnier meme sprung up this week, comparing age 63 in 1985 versus age 63 in 2020. Betty White was 63 when the series started, her hair as white and as rigid in its helmet shape as a plastic Miami Christmas tree. The 2020 version for comparative sake was real housewife of New York Ramona Singer, who is 63 this year.

What has changed? First and foremost our perception of age has changed. The phrase “50 is the new 30” has some real validity to it. Meanwhile, the professional lives of women have changed dramatically over 35 years; we now have pay cheques to spend on ourselves and the self-confidence that comes with earning power. We are having children later, if at all. Technology has lifted a whole lot of daily burdens from our lives, so we have time and money to invest in our health, well-being and appearance. We exercise regularly and use anti-aging skin products, most notably with SPF.

It is the title of another reality series that underlines the whole then-versus-now aging phenomenon. Put quite simply, we are all just Keeping Up: with celebrities, with career competitors, with friends and neighbours. Celebrities and influencers pull out the big guns — the laser guns, scalpel and other extreme anti-aging devices — and we follow suit as best we can within our resources and comfort zones.

But what we can take away from The Golden Girls now and then is something that has no price tag and no “downtime” recovery: a sense of humour is what makes you look eternally young and vital.