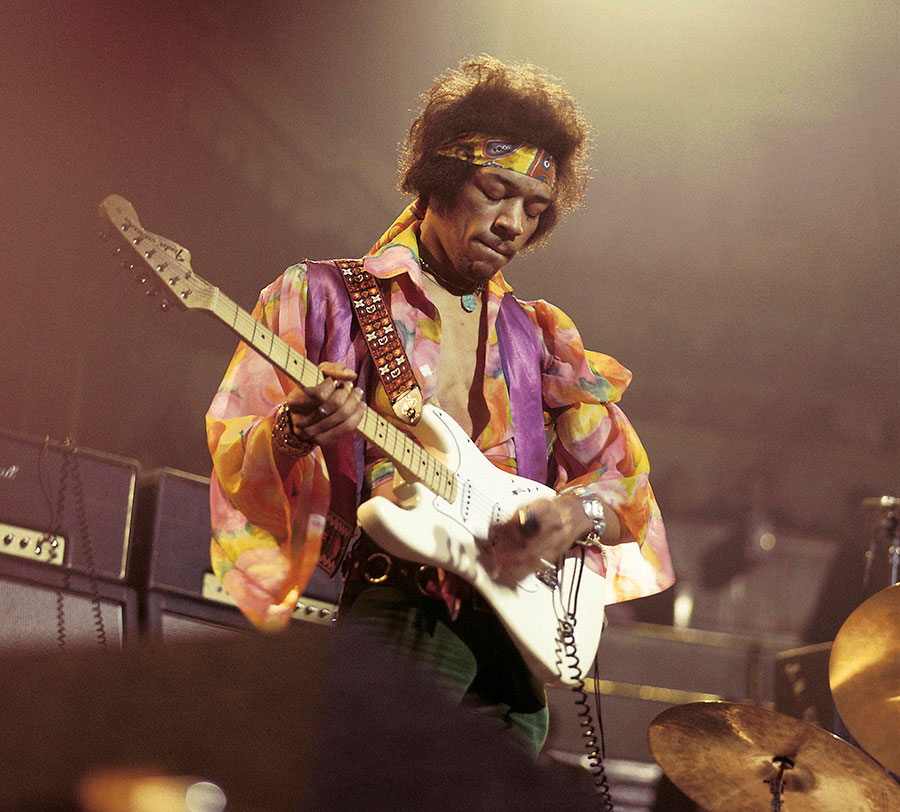 Jimi Hendrix performed renditions of the "Star-Spangled Banner" at least 70 times in his career, but none were more iconic than his 1969 performance of the anthem at Woodstock. Photo: David Redfern/Redferns/Getty Images

One of the most powerful, searing renditions of the national anthem ever recorded, Jimi Hendrix’s iconic Woodstock anthem, almost never happened.

In his memoir, Hendrix’s drummer, Mitch Mitchell, admitted that the band “hadn’t rehearsed … or planned to do ‘The Star-Spangled Banner’ at Woodstock.”

The festival was supposed to wrap up on Sunday night, but a series of delays, traffic jams and rainstorms had postponed the closing set until 9:00 a.m. the next day. Hendrix hadn’t slept the night before.

Hendrix played for more than an hour that Monday morning before introducing his regular concert-closer, “Voodoo Child (Slight Return).”

“Thank you very much and goodnight,” he said, as the band continued to jam. “I’d like to say peace, yeah, and happiness.”

But then, instead of wrapping up his set, he launched into his iconic take on Francis Scott Key’s song.

WATCH: Hendrix performs the National Anthem as an encore

Fifty years after Hendrix performed “The Star-Spangled Banner” at Woodstock, the rendition still serves as an exemplar of music’s political potency. It inspired my own scholarship on the past, present and future of the national anthem.

What made Hendrix’s rendition so remarkable was his ability to fuse protest and horror with patriotism and hope.

Roused by the heroism of the soldiers who repelled the British attack on Baltimore’s Fort McHenry during the War of 1812, Francis Scott Key wrote the song in September 1814. Using a well-known melody, the lawyer-poet composed a new set of lyrics to fit the tune.

Hendrix, in a way, continued this tradition, updating the tune to say something about the world around him. In the 19th century, it was common practice to write new lyrics to old songs as a way to comment on politics and culture – a tradition known as broadside balladry. So far my research has identified roughly 200 songs written to the tune of “The Star-Spangled Banner.” The abolitionist lyric “Oh Say, Do You Hear?” is one particularly powerful example.

Rather than change the words, however, Hendrix transformed the musical arrangement.

Mining the Anthem’s Many Meanings

Some might think Hendrix’s Woodstock Banner was an on-the-spot improvisation. But he had actually been experimenting with the song for over a year, and he would continue to perform the anthem up until his untimely death in September 1970.

In all, Hendrix performed the piece at least 70 times, with his last known performance taking place almost a year after Woodstock – in Hawaii, on Aug. 1, 1970.

Hendrix sometimes titled his anthem renditions “This Is America,” and his arrangements were as flexible as they were potent. They could be as short as three minutes or as long as six-and-a-half.

Building off the traditional melody, Hendrix could paint a picture of patriotic pride or commercial corruption.

Hendrix knew how to celebrate the nation. For example, his studio version of the anthem is a patriotic fireworks display, bursting with overlapping layers of the traditional melody. It’s decorated with sparkling trills, extra melodic passing tones and extreme octave shifts.

At the other end of the symbolic spectrum are his four anthem renditions that he recorded live at San Francisco’s Winterland Ballroom in October 1968. They begin with dark, atmospheric improvisations, punctuated by Mitchell’s explosive drums, and include raucous quotes of TV advertising jingles and a distorted, out-of-tune version of the melody that devolves into the Civil War lament “Taps.”

Hendrix also knew how to blow up the anthem.

Woodstock was a social experiment – a cultural response to a decade of protest and fear.

On one side, there was America’s youth, outraged by racial injustice and war in Vietnam. On the other side, there was an establishment terrified by the social revolution taking place: new attitudes about sex, drugs, spirituality, racial equality and communal living.

This generational collision came to a head on the wooden stage built at Max Yasgur’s farm.

Hendrix was an unlikely countercultural hero. He was a mixed-race, rock icon who had served in the U.S. Army’s 101st Airborne, earning his “Screaming Eagles” patch as a paratrooper. While he escaped the military to pursue his musical career, he still had friends in Vietnam.

In his Woodstock anthem, Hendrix seems to mimics explosions, machine gunfire and a wailing emergency siren – musical images of horror.

But these departures from the traditional melody don’t dismantle the anthem. Instead, he plays notes that intone the words “bombs bursting in air” and “rockets red glare.” He depicts, rather than destroys, the song.

Hendrix then plays the “Taps” melody, a tune traditionally performed at military funerals to honour the sacrifice of service.

Finally, he returns to the traditional anthem melody, offering a full and faithful conclusion to the song. He lingers on several words, extending the note sounding the word “free” for six full seconds. His musical conclusion seems to echo the optimistic, if not triumphant, themes of the festival.

When 400,000 arrived for a concert designed for, at most, half that number, a public health disaster loomed. Shortages of food, water, gas, and medical supplies, compounded by an impassable traffic jam foretold of suffering if not violence. Yet the community pulled together and a temporary city appeared. Rivers of mud made utopia impossible, but attendees persevered. Extra food was donated, volunteer doctors from the U.S. Army and Red Cross were flown in by helicopter, patience and peace reigned. Music held the world together.

Hendrix used Key’s anthem to reflect the America he experienced at Woodstock that weekend. It was a nation mired in contradiction, but also a community capable of pulling together.

It was a cry of anguish and a vision of “peace, yeah, and happiness.”

Mark Clague is an Associate Professor of Musicology at the University of Michigan.

Back to The Garden: Reflecting on Woodstock’s Legacy 51 Years Later