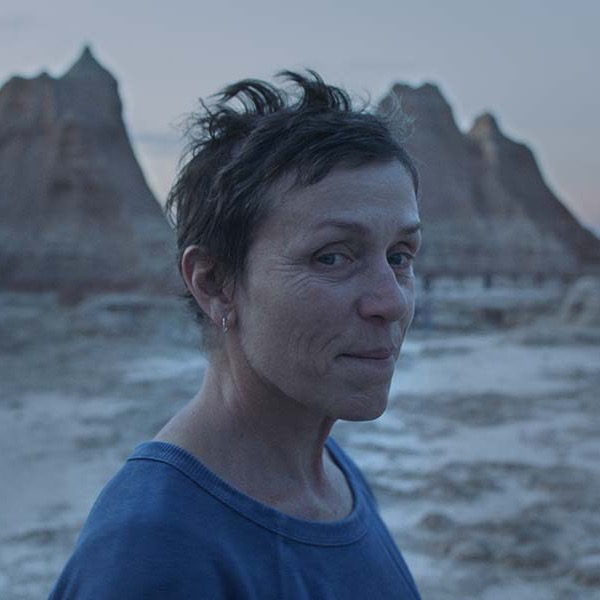 Chloé Zhao’s Nomadland, about a woman (Frances McDormand, 63) who lives in her van and travels across the American West working various jobs along the way, won the Toronto International Film Festival’s coveted People’s Choice Award on Sunday — an honour that has, in the past, predicted future Oscar winners.

In fact, since 2010, three films — The King’s Speech (2010), 12 Years a Slave (2013) and Green Book (2018) — have won the TIFF People’s Choice Award and then went on to win the Best Picture Academy Award, and this year the honour only bolsters Nomadland’s already existing Oscar buzz.

Of course, the 2020 iteration of TIFF is already one for the record books. The pandemic forced TIFF to trade red carpets, glitzy galas and celebrity sightings for digital movie premieres, interactive talks and online Q&As, while living rooms around the world were transformed into makeshift festival theatres.

But at the core of it all remained, of course, the films. This year’s festival lineup was pared down from the usual few hundred movies to roughly 50 feature films in addition to short films and other festival events.

Post-TIFF, many of the films screened at the festival will either wind up in theatres or on various streaming services. So, with the fest wrapped up, we’ve compiled 10 of our favourite 2020 TIFF films.

Nomadland, meanwhile, is beautifully shot with stunning landscapes and a wonderfully authentic performance from McDormand. The opposite of aging in place, McDormand’s character exemplifies the idea of aging on the move, never giving up on the idea of adventure, making “home” wherever you stop for a night and finding family along the way. It’s not a lifestyle for everyone, but the film is.

Review: This is truly one of the most delightful films at TIFF this year. It’s the story of the truffle industry in northern Italy — of octogenarian truffle hunters and their beloved truffle-sniffing pooches, the buyers who drive the market and the cutthroat politics and thievery that results in everything from trespassing on another hunter’s territory to the poisoning of the truffle dogs.

Along the way, we meet the delightful cast of characters, including an 84-year-old truffle-hunting legend who, with no wife or children, hopes to find a woman to marry and take care of his beloved dog, Birba, when he dies; 87-year-old Carlo who boasts “I walk faster than the deer” and whose refusal to give up his nighttime truffle hunting ignites arguments with his long-suffering wife; and a former circus performer and poet who refuses to continue hunting truffles because the old traditions of respect and honour are no longer valued.

The Truffle Hunters is a glimpse into the fascinating and unique lives of these older men whose passion for finding the valuable subterranean fungi imbues their lives with a thrilling purpose while keeping them active and young in mind, spirit and heart. There’s a lesson in here for all of us about living life to the fullest and embracing the passions and loves that make it worth living.

Review: Quebec-born Mohawk film director Tracey Deer, 42, took home the TIFF Emerging Talent Award this year at the TIFF Tribute Awards, and Beans — her feature film debut about the armed 1990 standoff between Quebec Mohawk communities and what the provincial government dubbed the “Oka crisis” — proves why. This powerful drama takes you inside the crisis through the eyes of Beans, a teenager who is coming of age as the world around her erupts into a terrifying battle for land and, on a larger level, equality and acceptance. The violence, racism and other struggles Beans and her community face — and the reactions from many of the white residents — echo some of the scenes we see during current and ongoing anti-racism protests, making this film as timely today as if it had come out in 1990.

Review: Idris Elba, 48, stars as Harp, the leader of a group of Black cowboys who train horses in North Philadelphia. Harp agrees to take in his estranged teenage son Cole (Stranger Things’ Caleb McLaughlin) for the summer to try and keep him out of trouble, but getting Cole off the streets and into the urban cowboy life isn’t as easy as he’d hoped. In addition, Harp and his team face pressure from developers who want to bulldoze their stables to put up new developments.

Based on a real life group of Black cowboys in North Philly, the film is an exploration of familial bonds — both blood and community — as well as an ode to real life Black cowboy culture and heritage in the United States. It even co-stars real members of North Philly’s Fletcher Street Riders. The film, however, manages to avoid getting bogged down in sentimentality, offering a realistic portrait of people, communities and cultures in flux and the lengths some will go to preserve their way of life.

Review: This Danish drama follows four middle-aged men — all teachers at the same high school — who embark on an experiment to test a theory that humans function best with a .05 per cent blood alcohol level. At first, the experiment works, and they find their levels of vitality and happiness drastically improved, but soon they realize that they’ve gone too far with it as long-buried issues in their personal lives come to the fore.

A mediation on friendship and aging, Another Round is a clever, introspective film that reminds us that, as we age, it’s easy to lose our lust for life, and for living, if we don’t put in the work to maintain it.

Review: Director Sam Pollard delves into freshly declassified documents to explore the how’s and why’s behind FBI head J. Edgar Hoover ordering the surveillance of Martin Luther King Jr. during the Civil Rights Movement. The film shows how Hoover, who served as FBI director for 48 years — almost a decade longer than King lived — thought of King as a liar and one of the most dangerous people in the U.S., while using the mechanisms of law enforcement at his disposal to try and shut him up. Everything from wire taps to attempted smear campaigns based on King’s extra-marital affairs were fair game, while protests, police brutality toward African-Americans, racial vitriol and conspiracy theories abounded — scenes that would fit into today’s political and cultural landscape. In fact, aside from revealing just how far Hoover went to try and stop King, the documentary is also a perfect example of the old axiom of “the more things change …”

King, for example, discusses how the FBI is so powerful and, yet, they somehow can’t seem to find and arrest people who murder African-Americans; white Americans blame King and civil rights protesters for the “trouble” and “rioting” rather than the racist actions that prompt the protests; and political opponents tried to label King and his cohort as dangerous communists. Sound familiar? Swap out “communist” for “Antifa,” and the scenes in the film aren’t so different from today.

They say that those who don’t learn from the past are doomed to repeat it. MLK/FBI proves that the past is now. It’s up to us to decide if we’ve learned from it, or if we’re inclined to repeat it all over again.

Review: An unprecedented poignant first-hand look inside a hospital in Wuhan, China — the epicentre of the COVID-19 outbreak — during the city’s 76-day pandemic lockdown. The film, which features a number of elderly patients coping with the virus, is a raw testament to the human spirit on the brink of life and death, as well as the frontline workers who tirelessly worked to save as many people as possible. Yes, there are the difficult moments — the sterilization of items that belonged to the deceased, or the calls to their families to deliver the news — but at times it’s also surprisingly cheerful thanks to the uplifting nature of the hospital staff and the patients who overcome the virus and head back home with a renewed appreciation for life. That renewed appreciation for life is also what sticks with the viewer long after the credits role.

Review: David Oyelowo, 44, had his breakthrough performance in 2014’s Selma, in which he played Martin Luther King Jr., and six years later he’s breaking through as a director with his first outing behind the camera — The Water Man. The film is a family adventure tale about a young boy (Lonnie Chavis, This Is Us) whose seeks out the mystical Water Man in the forest near his town in the hopes that he can use his powers to heal the boy’s mother (Rosario Dawson), who is dying of cancer. The film explores ideas around life and death and familial bonds while asking the tough questions about mortality and loss.

Oyelowo, who also co-stars as the young boy’s father, directs a wholly original, heartwarming and emotional movie that blends live action and animation to follow the boy’s hopeful quest. Anyone looking for an uplifting, feel-good (but not overly sentimental), movie — especially one they can share with the kids or grandkids — should search out The Water Man.

Review: Viggo Mortensen, 61, makes his directorial debut with Falling, a drama about a gay man (Mortensen) who attempts to move his angry, homophobic father (Lance Henriksen, 80) across the country so he can care for him as he battles dementia. It’s a powerful film told with periodic flashbacks to explain the fractured father-son relationship, while Henriksen’s uncompromising performance — going back and forth between spells of dementia-induced confusion and clear-eyed anger at the modern world — is unquestionably the show-stealer.

That said, the film becomes divisive in that Henriksen’s character is allowed to shoot off a barrage of homophobic slurs and other insulting comments largely without consequence. The lack of remorse or personal growth renders Henriksen’s character unsympathetic and makes viewers question why anyone would invest a lifetime in accepting such abuse, let alone the span of a two-hour movie, without speaking up and putting him in his place.

As a society, we are beyond the idea of “they’re old and set in their ways” when attempting to excuse offensive behaviour or abuse, which makes aspects of this film that much more puzzling. Still, Mortensen and, especially, Henriksen put in great performances, and it’s worth checking out to decide for yourself how you feel about the handling of an abusive father who happens to suffer from dementia.

Review: This fantastic Canadian thriller is, admittedly, not for everyone. The premise is simple enough — a pair of estranged sisters (one played by co-director Madeleine Sims-Fewer) meet with their partners at an idyllic cottage to reconnect, mend fences and enjoy some drinks by the fire. The scenery is straight out of a Canadian cottage country brochure, but beneath the natural beauty are emotional tensions and bitter resentments that bubble up throughout the weekend. But one particular act of violence triggers a retaliation that is masterfully calculated, uncompromisingly brutal and forever alters the perpetrator as well as the victim.

This film features graphic violence, a non-linear narrative and elements of surrealism that only heighten the horror. As such, it’s not a movie for everyone’s tastes. But for those who like the edge-of-your-seat tension, a movie that doesn’t shy away from the grotesque and creative narrative storytelling that only heightens the sense of uneasiness that permeates the entire movie, Violation is for you.