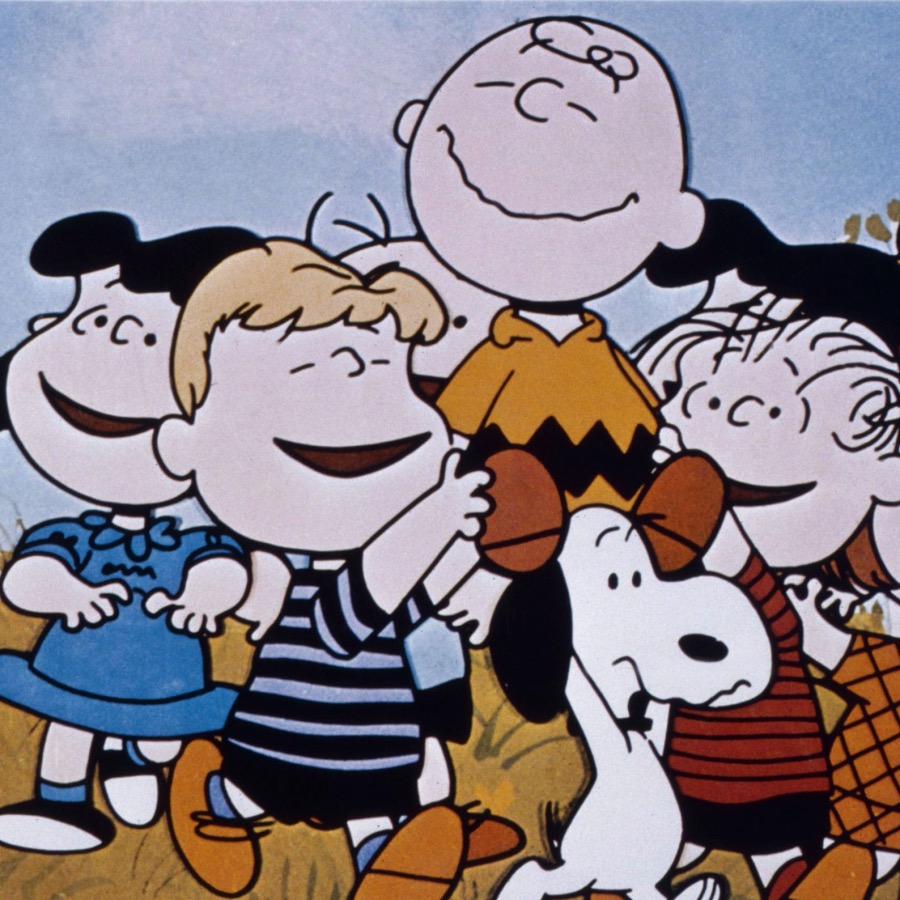 Charlie Brown and his 'Peanuts' pals, seen here on a 1969 lobbycard from 'A Boy Named Charlie Brown,' celebrate their 70th anniversary on Oct. 2. Photo: LMPC via Getty Images

They say you’re only as old as you feel — which means that, after a day of having Lucy yank the football away, causing him to embarrassingly fall flat on his back, Charlie Brown probably feels about 100.

But as the first Peanuts comic strip debuted on Oct. 2, 1950, it turns out good ol’ Charlie Brown is actually 70.

He looks good for his age, all things considered. And hey, what about Snoopy? According to this highly unscientific human-to-dog age calculator, 70 human years would mean the beloved beagle is a whopping 293 years old — making him the Methuselah of comic-strip characters.

Regardless, over the years Peanuts has proven to be one of the most famous and revered comics of all time, a franchise that grew out of the funny pages and into a globally recognized brand that includes movies, theatre productions, video games, amusement parks, product endorsements and books — including the new The Peanuts Book: A Visual History of the Iconic Comic Strip.

In fact, according to the New York Times, Peanuts creator Charles Schulz “drew more than 18,250 strips in nearly 50 years” — a run that Syracuse University pop culture professor Robert Thompson called “arguably the longest story ever told by one human being.”

But while Charlie Brown, Snoopy, Lucy and the rest of the Peanuts gang are instantly recognizable, the stories behind the comic strip are just as captivating. From the connection between the death of a Civil Rights icon and the creation of the strip’s first African-American character to the story of how A Charlie Brown Christmas almost didn’t come to pass, the history of Peanuts is filled with incredible backstories.

So to mark its 70th anniversary, join us in revisiting seven fascinating facts about Peanuts.

1. The Creator of Peanuts Hated the Name

If Charles Schulz had his way, the Charlie Brown comic strip would have retained the name he preferred: Li’l Folks. It’s the same name he used for a cartoon that Time magazine notes “included forerunners of the Peanuts characters.”

The Time story adds that United Feature Syndicate, which took on the Peanuts comic strip in 1950, was worried about allegations of copyright infringement from two other comic strips that preceded it — Li’l Abner and a 1930s comic called Little Folks. As such, they decided on a name change.

The 2007 book Schulz and Peanuts by David Michaelis claims that the Peanuts name was inspired by the kids who sat in the “Peanut Gallery” on the show Howdy Doody. Schulz, however, made no secret about how he hated the name change.

“I wanted to keep Li’l Folks. I wanted a strip with dignity and significance,” he said in a 1965 Time interview. “Peanuts made it sound too insignificant.”

He added, as The Atlantic notes, “If someone asks me what I do, I always say, ‘I draw that comic strip with Snoopy in it, Charlie Brown and his dog.’”

2. Charles and Charlie — One and the Same?

Some people claim that Charles Schulz based Charlie Brown on himself. Those people include his son, Craig Schulz, who noted in the book The Art and Making of the Peanuts Movie, “We always say that each of the characters represents a piece of our dad. Charlie Brown was his real self, while Snoopy was what he wanted to be.”

But according to Schulz himself in an interview included in the book Charles M. Schulz: Conversations by M. Thomas Inge, when asked about the connection he said, “I think of myself as Charles Schulz. But if someone wants to believe I’m really Charlie Brown, well, it makes a good story.”

Franklin is the first African-American Peanuts character, and his origins stem from the assassination of Martin Luther King Jr. in 1968.

According to a New York Times obituary for Glickman, who died this past April at age 93, King’s murder “heighten[ed] her concern about what she saw as toxic racism that permeated society” and, as a result, she began “thinking of ways the mass media shaped the unconscious biases of America’s children, she later wrote, and ‘felt that something could be done through our comic strips.’”

The story adds that Glickman’s letter acknowledged that some readers at the time may not take kindly to the appearance of an African-American character, but that Schulz has “a stature and reputation which can withstand a great deal.”

Schulz replied to Glickman, saying he agreed with the need to add the character but worried that he and other cartoonists who feel the same would look as though they were patronizing the African-American community by doing so. So Glickman shared Schulz’s concern with some of her African-American friends and replied, as the Times notes, “Adding a black  character, without great fanfare and ‘in a casual day-to-day scene’ would allow black children to see themselves in popular culture and ‘suggest racial amity.’”

And so Franklin appeared in his first comic strip, dated July 31, 1968, showing up on a beach and helping Charlie Brown retrieve a lost beach ball before pointing out a sandcastle the latter built was crooked.

“I guess maybe it is [crooked]” Charlie Brown responds. “Where I come from, I’m not famous for doing things right.”

In a separate story, the Times reported that American cartoonist Barbara Brandon-Croft, 61, took notice of Franklin’s Peanuts debut in 1968 at age 10.

“I remember feeling affirmed by seeing Franklin in Peanuts,” she told the paper. “‘There’s a little black kid! Thank goodness! We do matter.’”

Brandon-Croft went on to become the first Black female cartoonist to receive a nationally syndicated comic strip, Where I’m Coming From, achieving the feat in 1991. The name of the strip also appears to be an homage to Franklin’s debut and Charlie Brown’s “Where I come from, I’m not famous for doing things right” line.

The official Peanuts website offers trivia tidbits about each individual main character — some which are from the comic strip storylines and others from Schulz’s own life.

For example, it notes that the fathers of both Charlie Brown and Charles Schulz were barbers; Snoopy read one word each day of the epic War and Peace until he finished it (that’s roughly 587,287 words, which would take around 1,609 years); that a character named Clara, who looks very similar to Marcie, appeared in 1968 — three years before Marcie’s debut — alongside Peppermint Patty; and that Schulz made Beethoven Schroeder’s favourite composer because “he believed words beginning with “B” sounded funny … like blockhead and beagle.”

The beloved little yellow bird Woodstock, meanwhile, debuted in 1966 but wasn’t named until 1970. And yes, he got his name from the famed 1969 Woodstock music festival.

In fact, the gang as we know it was assembled over many years. For example, Charlie Brown appears in the first ever Peanuts comic  in 1950, but in that strip he shares the spotlight with two kids named Shermy and Patty — a different character from Peppermint Patty, who debuted 16 years later. Snoopy, meanwhile, was introduced in the third ever comic strip, but the others trickled in over time, with Lucy and Linus, for example, arriving in 1952 and others between the years 1954 and 1973.

The beloved holiday cartoon special A Charlie Brown Christmas turns 55 this year, but it almost didn’t make it to air. Evidently, the executives at CBS who green-lit the special hated the final product when they saw it. According to IMBD, “Their major complaints were that the pace was too slow, the jazz music didn’t work with the special’s tone and that the animation was too simple, among other things.”

However, CBS had already promoted the special, and it was due to air a week or so later, so they had no choice but to run it. As executive producer Lee Mendelson explained on the DVD The Making of A Charlie Brown Christmas, “I really believed if it hadn’t been scheduled for the following week, there’s no way they were gonna broadcast that show.”

The special, of course, received rave reviews, won Emmy and Peabody awards and remains a holiday staple to this day. And in 2015, for the movie’s 50th anniversary and to mark the 65th anniversary of Peanuts, the U.S. Postal Service released a series of stamps based on the film. It remains the second-longest running American Christmas special in history, behind the famed stop-motion Rudolph the Red-Nosed Reindeer special, which premiered a year before it.

A Charlie Brown Christmas also proved the first of 45 animated Peanuts specials, but it wasn’t the first time the Peanuts gang appeared in animated form. That happened a few years earlier, in 1959, when some of the characters began appearing in a series of Ford car commercials — cartoon kids extolling the virtues of the American-made vehicles.

6. Charles Schulz Killed Off a Character With an Axe

In 1954, Schulz introduced the character of Charlotte Braun — a female answer to Charlie Brown. But where Brown was timid and awkward, Braun was confident, loud and overbearing. And, also unlike Charlie Brown, fans couldn’t stand her, so Schulz simply stopped writing her character. You’d think a character who only appeared in 10 comics out of the tens of thousands of Peanuts strips would be forgotten to history. But not so.

Schulz died in 2000 and not long afterward a woman named Elizabeth Swaim donated a letter she received from the cartoonist back in January 1955 to the U.S. Library of Congress. Schulz wrote the letter to Swaim in response to a complaint she sent to him about the Charlotte Braun character. And in the letter, Schulz wrote, clearly tongue in cheek, that Charlotte’s demise would be on Swaim’s conscience.

I am taking your suggestion regarding Charlotte Braun and will eventually discard her. If she appears anymore it will be in strips that were already completed before I got your letter or because someone writes in saying that they like her. Remember, however, that you and your friends will have the death of an innocent child on your conscience. Are you prepared to accept such responsibility?

Thanks for writing, and I hope that future releases will please you.

Then, at the bottom of the letter, he drew an image of Charlotte Braun with an axe in her head, which you can see here or in the tweet below.

7. Linus Popularized the Idea of a Security Blanket

Lovable Linus can’t go anywhere without his favourite blue blanket. And given he debuted in the comic strip in the 1950s, many credit him — and, of course, creator Charles Schulz — with inventing the idea of a security blanket. According to the Merriam-Webster dictionary, though, that notion is only partially correct.

Schulz didn’t invent the phrase or idea of the security blanket. As the dictionary explains, “In the 1920s, a security blanket was a blanket that was placed over a sleeping child and fastened by clips.” It adds, “During World War II, the term security blanket was enlisted into U.S. military jargon and referred to any measures or sanctions taken for security purposes, but especially to those for keeping military information secret.”

However, the same entry also notes, “The emergence of that sense of the term is contemporaneous with the first appearance of Linus with his blanket in 1954. That fact combined with the popularity of Peanuts led many people to credit Schulz with the coining of the term. However, it can only be said that Schulz helped popularize a new sense of security blanket, since it was already being used in meanings much different decades before.”

Black Panther: A 50-Year Journey From the Civil Rights Era to the Silver Screen

Celebrating 265 Years of the Funnies: The Art Form That Just Won’t Be the Same Out of Print