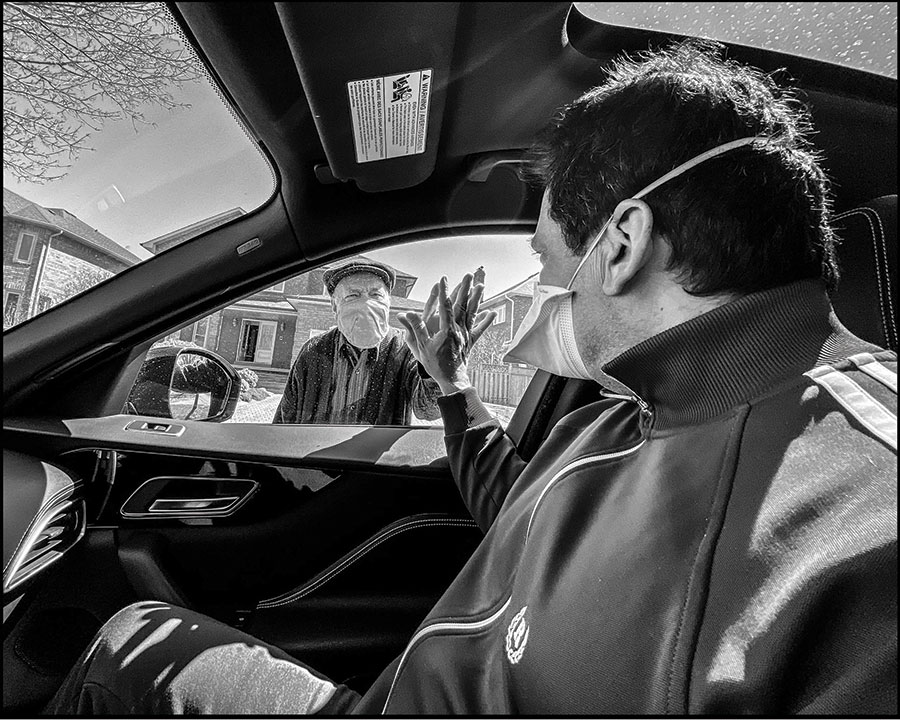 During a visit to his father at the height of the pandemic, celebrity photographer George Pimentel captured an emotional moment as they held their hands against the car window. Photo: George Pimentel

The True North proves to be nothing if not resilient as the COVID-19 pandemic makes it a time to remember – and document.

George Pimentel is a guy used to working in a tux. As Canada’s top celebrity photographer, he and his camera have clocked every major red carpet from TIFF to Cannes to the Met Gala and the full Hollywood and Canadian awards circuit. Known for his Canadian manner – he asks before he shoots, thus endearing him to paparazzo-fatigued stars – Pimental has captured iconic images of A-listers from Brad Pitt to George Clooney, J.Lo to Harry and Meghan. His magically timed shot of William and Kate’s balcony kiss – he photographed their 2011 royal wedding on assignment for Maclean’s – ran around the world. At home in Toronto, One-Shot-George has for decades documented the evolving fashion and social scene.

By contrast, his pandemic gig – documenting change in Canada as we adapt to life in its various stages – is a shirtsleeves-rolled-up return to his photojournalistic roots, as well as a tribute to his family roots. Pimentel is a third-generation photographer: his father had a portrait studio dedicated to marking highlights of Toronto’s Portuguese community – weddings, communions, graduations, festivals – where young George apprenticed from an early age. His grandfather similarly recorded life in the Azorean village of his ancestors.

Pimentel had been deep in an early-stage lockdown project of organizing those multigenerational photos and was in a reflective mood. “The elegance of the old photos spurred me to begin researching photos of the Spanish flu,” he says. “I wanted to see what happened: a photo is the evidence; to me, it is the truth.”

He began by documenting his kids lounging around, then expanded to his neighbours’ kids, playing physically distanced on the driveway. “But the moment of truth was when I went to visit my father for the first time after this all started.” The day was April 20. “I stayed in the car, he came up to the window with a mask on. I didn’t open it but instead put my hand on the window. He touched his hand to mine on the other side of the glass. It was such a spontaneous, natural expression.” He captured the moment and posted it on Instagram. His phone exploded.

One of the people whose eye he caught was Sara Angel, founder and executive director of Art Canada Institute and an advisory board member for Portrait Gallery of Canada. She jumped into action, and they set about putting together a team and a call-out for public participation. The result? The Canada COVID Portrait project, intended to document how the virus has transformed all aspects of our lives. Its intention is to preserve a record for the archives. To date, some 169 amateur and pro photographers from every province and territory have shared some 2,500 images under the hashtag #canadacovidportrait. A curated selection appears on the Instagram site of the same name. On the horizon: a website and an exhibit of the curated selections in Ottawa.

But it was the process itself that was revelatory to the 53-year-old Pimentel: “I felt like I was 18 again. Every day I had a purpose, I’d grab my camera, and one lens and go out and find people to tell their stories. Artistic freedom at its best.” There was a moment when he realized he was supposed to be in Cannes. “Instead, I’m at a homeless shelter or a food bank. I’ve never felt so alive or rejuvenated.”

From the lonely woman praying on the steps of the church she wasn’t allowed to enter, we moved into a period where the streets and parks filled with young people. “From one day to the next, Trinity Bellwoods went from Coachella to a series of circles,” he says. “The point for me is in showing the adaptations we make as we go along through this together.”

He followed ambulances and firetrucks – at a safe distance, of course – and sought out front-line workers to record their exhausted postures. He shot bar owners in their empty bars, the stacked-up chairs bearing witness to their sorrow. He went to protests for Black Lives Matter and pivoted to shoot physically distant Pride celebrations, graduations and proms. The society shooter had come full circle, documenting the same things his father and grandfather had: the rituals, adapted to the times, that make us who we are.

Faces of a Pandemic: Shining a Light on the Everyday Heroes of the Covid-19 Crisis