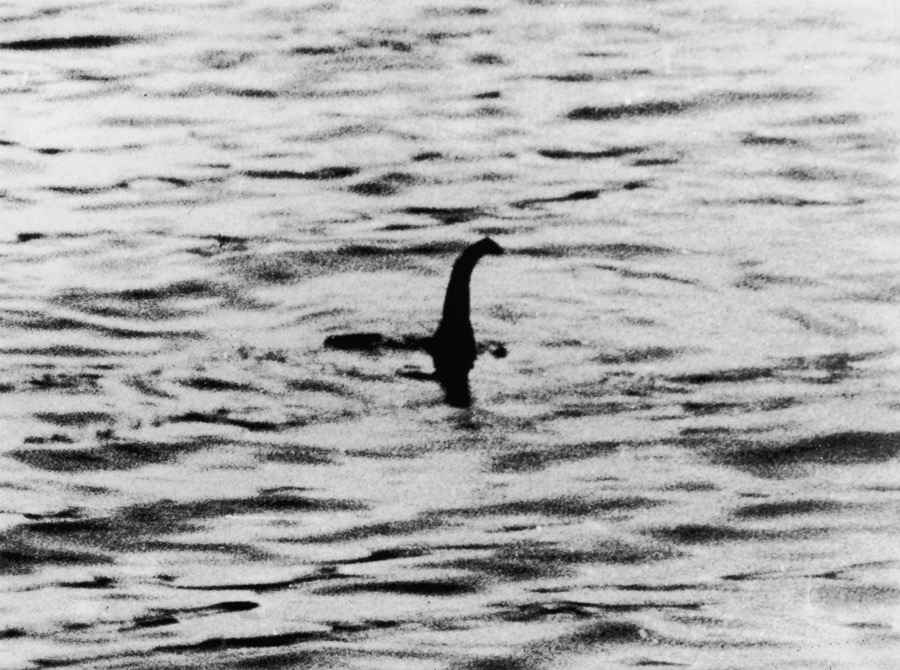 A view of the Loch Ness Monster, near Inverness, Scotland, April 19, 1934. The photograph, one of two pictures known as the 'surgeon's photographs,' was allegedly taken by Colonel Robert Kenneth Wilson, though it was later exposed as a hoax by one of the participants, Chris Spurling, who, on his deathbed, revealed that the pictures were staged by himself. Photo: Keystone/Getty Images

This past May marked the 87th anniversary of the first modern sighting of the Loch Ness monster. This seems recent if you think of the monster as being centuries old (or millions of years old if you’re convinced it’s a plesiosaur). But it’s not.

Monsters, as we know them today, are a recent phenomenon, nurtured by 20th century pop culture. They may individually be inspired by some ancient folktale, but the publicity machine for monsters is one we all grew up with.

And why not? They’re fun.

When we drove our sons to their grandparents’ in Durham, N.C. (where my father-in-law taught at Duke University), we’d pass by Flatwoods, West Virginia and wave to the Mothman, the subject of, among other things, the 2002 Richard Gere movie The Mothman Prophecies. The Mothman events in the ‘60s happened about 100 miles away from there (that was as close as our route took us), but Flatwoods was also the home of the Flatwoods Monster in the ‘50s, supposedly a giant alien robot with an owl face.

In any case, calling out to the monsters became a family ritual as we’d turn off I-79 past Flatwoods, down a Blue Ridge Mountains road that took us to I-77.

And it is SO West Virginia that there’d be two separate local monsters within walking distance of each other (especially if you have really big feet, or wings). Can’t have anything to do with the local moonshine, can it?

At 87, Nessie is a little old to be a Boomer, but Boomer culture wouldn’t be the same without her, nor would the craze for monsters that followed. In what amounted to the 1930s version of a “viral phenomenon,” the cryptozoological creature (which previously was reported only a few times over centuries) became a craze overnight.

Journalist Alex Campbell applied the word “monster” to the beast that had been sporadically reported every century or so, after a report by a Londoner that he and his wife saw “the nearest approach to a dragon or pre-historic animal that I have ever seen in my life” crossing the road to the Loch.

By December, the first ostensible photo was taken of something in the water, soon followed by the famous “Surgeon’s photo” and three minutes of colour film of something that was eventually deemed to be a floating object. (Skeptics have deemed the most common Nessie sightings to be otters).

In the ‘50s, people started using sonar to find the beast.

Google Street View even has a camera on Loch Ness so you can do your own search for bumps in the water and waves.

Kids my age grew up with Beany and Cecil, the cartoon adventures of a boy and his sea monster. Gen-Xers had Sigmund and the Sea Monsters, a ‘70s series by Sid and Marty Krofft (of H.R. Pufnstuf fame). On the Simpsons, Montgomery Burns drained the Loch to find Nessie.

Watch hockey and you’ll see the New Jersey Devils, named, not after Lucifer, but after a cryptozoological beast native to the Garden State. Mexico’s goat-sucking chupacabra was a big enough media star that The X-Files devoted an episode to it.

The Yeti, again a creature of ancient legend, is pretty much a child of the ‘50s, following footprint reports by Edmund Hillary on his trek up Mount Everest in 1953 — hype built upon hype, further expeditions to follow.

Not to be outdone, North America (where there is no fossil evidence of any great apes or early hominids ever having existed) breathed life into the Sasquatch/Bigfoot legend, with the much-debunked-and-debated Patterson-Gimli film, shot in 1967.

No less a respected individual than chimpanzee advocate Jane Goodall admits of Bigfoot “I always wanted them to exist,” but said it was unlikely.

And that may be the rub. It’s hard to be the buzzkill who tells the 20% of people who believe Bigfoot exists that it’s untrue.

It can be funny, though. Community’s Joel McHale, in his TV-week-in-review series The Soup, loved to rip into Animal Planet’s series Finding Bigfoot (in which they never found Bigfoot in seven seasons of trying).

In one clip, a character exclaimed, “I believe we’re closer than ever to finding Bigfoot!” The camera then returned to the host, who said, “Yes. We’re closer to never than ever!”

Meanwhile, I have a date to revisit last year’s Godzilla: King of the Monsters, a sequel of sorts to the King Kong movie Skull Island. There was a time when I’d go out of town on work trips and always return with Godzilla movies for the kids.

This article was originally published on May 23, 2019.

Masters of Horror: Classic and Contemporary Reads to Terrify You This Halloween