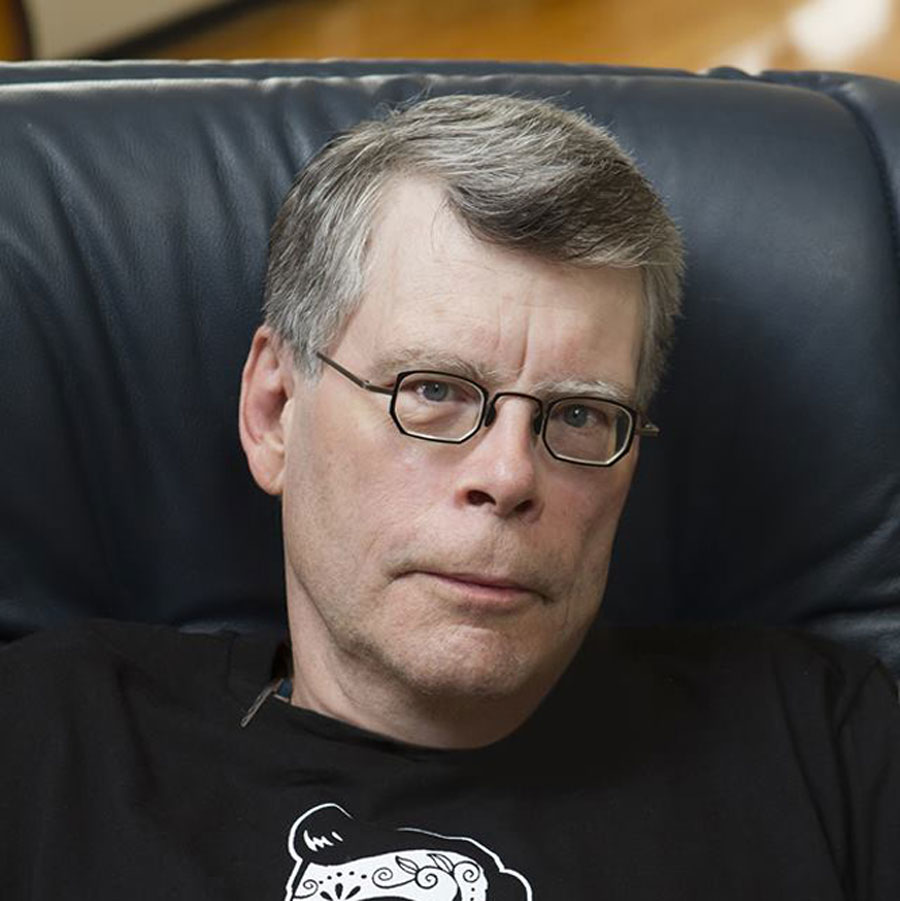 “I like to scare people, I really do.”  —Stephen King in a 1979 interview with the New York Times

To call Stephen King prolific is like calling Pennywise a “little” spooky. King is mind-blowingly productive (as Pennywise is terrifyingly sinister). King, who turns 73 on Sept. 21, has written or collaborated on more than 80 books. Which is basically a book a year, except he didn’t publish a book — his chilling debut novel Carrie — until 1974 when he was in his mid-20s. Do the math. It’s impressive.

In an interview with the New York Times in 1979, King said, “I’m not a fast writer but I stick to it. I write 1,500 words a day, and the stuff just piles up. It’s a constant secretion. I have the feeling that if I stop, I won’t be able to do it again.”

While King has never been a literary darling (Harold Bloom once pompously proclaimed that “Stephen King is beneath the notice of any serious reader“), he has enjoyed tremendous commercial success, selling an estimated 350 million books. And recognition of his talent has come from some highly regarded sources. In 2015, Barack Obama presented the writer with the United States National Medal of Arts, with the commendation that “Mr. King combines his remarkable storytelling with his sharp analysis of human nature. For decades, his works of horror, suspense, science fiction and fantasy have terrified and delighted audiences around the world.” (Conversely, the current president bestowed a different sort of honour when he blocked King on Twitter for his constant and creative criticisms.)

Maybe you’ve never read King or are looking to brush up on your reading. It can be difficult to know where to start, so we’ve rounded up some of his essential titles.

You can’t go wrong with anything from the early period of King’s career, but a few titles bear singling out.

Were it not for his wife, Tabitha, we might never have heard of Stephen King. In the early 1970s, King was working as a high-school teacher, living in a trailer with his family, unable to make ends meet. In perhaps the most significant turning point of his career, King gave up on his manuscript about a young girl bullied by her classmates, abused at home and gifted with telekinesis, throwing out everything he had written. Tabitha rescued the pages and urged King to continue. A few months later, Carrie sold hardcover rights for a $2,500 advance; paperback rights sold a short time later for $400,000. King’s career was on its way – and not just as a novelist. While Carrie is a crackling good read and one of King’s most experimental books, it also served as the source for Brian De Palma’s classic 1976 film, forming a template for King’s career going forward: best-selling, cinematic, highly adaptable fiction at a prodigious rate.

’Salem’s Lot is not only the ultimate modern vampire story, King’s second book also establishes one of the key elements of his writing: having his main character be a writer. In this case, it’s Ben Mears, who returns to the town where he spent his childhood, only to find it being slowly consumed by vampires. King has claimed it’s one of his favourite among his own works, which is high praise indeed. It’s a genuinely scary novel (who knew a tap on the window could be so terrifying?), which became a truly scary TV miniseries in 1979. A new film adaptation is currently in the works.

Speaking of adaptations, the next major King film coming to cinemas is Dr. Sleep, in early November, so you’ll want to revisit The Shining (Dr. Sleep is the story of Jack Torrance’s now-adult son Danny and is a powerful novel in its own right). As a novel, The Shining is much more subtle than the 1980 adaptation by Stanley Kubrick — a film which King disapproved of and called “a big, beautiful Cadillac with no engine inside it.”

As Jack and his family spend the winter at the isolated Overlook Hotel while he tries to finish his book, he spirals slowly into madness and mania. You might have read it before – or seen the movie – but it’s never a bad time for another visit to the Overlook.

If you’re looking to move into a novel, there are few better than The Stand, King’s longest novel. (The writing of the novel took so long and was so frustrating, King admitted in Danse Macabre, his non-fiction book on horror writing, that he began to refer to The Stand as “his own little Vietnam.”) The Stand follows its cast of characters through the spread of a super-flu, Captain Trips, that kills 99 per cent of humanity. The survivors, in King’s tale, divide themselves into factions. A classic tale of good versus evil that turns out to not be quite so simple, The Stand was rereleased in 1990 as a “complete” edition, including more than 400 pages cut by the publisher on its first release. It’s essential King reading — voted the No. 1 King book in a reader poll by Rolling Stone — and it is also our first introduction to Randall Flagg – The Walkin’ Dude, The Dark Man, The Man in Black – a recurring villain in the King multiverse.

If The Stand has a competitor for King’s magnum opus, it’s probably It. The novel follows a group of friends as they try to defeat the evil that hunts the town of Derry, both as children and adults. It is, perhaps, the ultimate King novel, with its small-town setting, its emphasis on childhood and its terrifying set pieces (largely ignored by the recent movie adaptations); heck, it even has a writer as one of its main characters. It is a marvel of construction and structure and certainly bears up under repeated readings. Published in 1986 — just a dozen years after Carrie – It was King’s 22nd book.

In the late 1960s, influenced by Spaghetti Westerns and The Lord of the Rings, King began imagining a fantasy epic. As he explains in the foreword to the series, “a novel that contained Tolkien’s sense of quest and magic but set against Leone’s almost absurdly majestic Western backdrop.” Mix in Robert Browning’s poem “Childe Roland to the Dark Tower Came” and the result, at first, was a series of connected short stories, published in book form in 1982 as The Gunslinger. Seven more books followed over the next three decades, making up The Dark Tower series, which follows Roland Deschain, the last gunslinger in a world that has moved on. (This is another case where it’s best to pretend the movie adaptation does not exist.)

While King is best known for his door-stoppers novels, some of his best writing is to be found in shorter forms.

A cornerstone to any King library is the 1982 collection Different Seasons, an assemblage of four novellas, each written between longer works in the late 1970s. There’s no reason to overhype this book: it includes the stories that were the basis for The Shawshank Redemption and Stand by Me, as well as two other, more deeply chilling tales. This is one to read and re-read.

The later collection of linked novellas, Hearts in Atlantis, is also King at his best, a journey through the generation that grew up with the Vietnam war and its consequences.

To the probable offense of folks like Harold Bloom, King’s On Writing, published in 2000, has become a key text for both readers and creative writing students. Part memoir, part “toolbox,” On Writing is what one imagines taking a writing course from King would be like: occasionally profane, occasionally cringe-inducing (the story about his childhood babysitter is not for the weak-stomached) and packed with more advice per line than you might have thought possible. It’s essential reading, as is Danse Macabre, King’s 1981 book about horror and his own writing.

With a staggering bibliography, any list of recommended reading from Stephen King is bound to come up short. Where is Misery, a nearly perfect novel of obsession and twisted love? How about Pet Sematary, possibly King’s scariest book? What of The Talisman, his epic first collaboration with Peter Straub? That’s the thing with King – there is always more to read, and every book opens the doorway to another.

And, true to form, there’s a new Stephen King book to recommend, The Institute.

A version of this story was originally published on Sept. 18, 2019

Not Quite IT: The Difficulty in Adapting Stephen King to Film and What It Says About the Prolific Writer

Masters of Horror: Classic and Contemporary Reads to Terrify You