From Donald Sutherland on ‘The Undoing’ To Christopher Plummer and Kim Cattrall, the Small Screen Resurgence of Older Canadian Stars 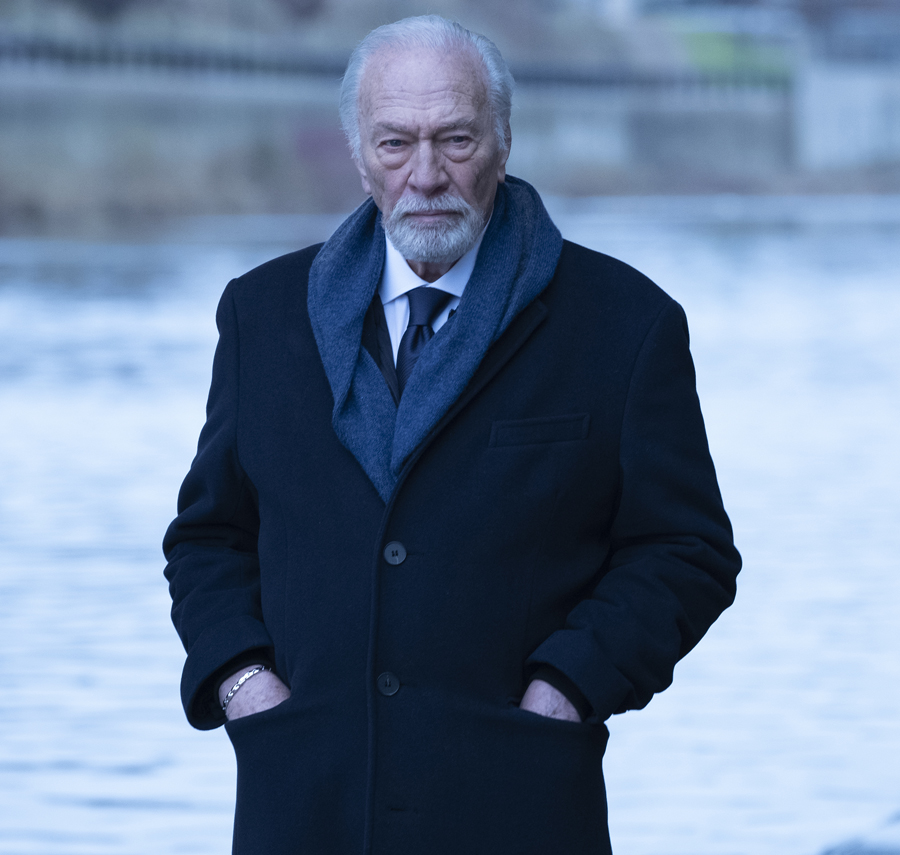 Older Canadian stars like Christopher Plummer (above in a scene from 'Departure'), Kim Cattrall and Donald Sutherland are starring in hit television shows. Photo: Courtesy of Global TV

Canadians are still on a high about Schitt’s Creek sweeping this year’s Emmy Awards in September, not least because the sitcom with soul blazed a comeback trail for SCTV alums Eugene Levy, 73, and Catherine O’Hara, 66 (who won her second Emmy, for Best Actress).

But beyond the Schitt’s Creek town limits, several other major Canadian actors between their 60s and their 90s (!) are having a moment on the small screen. These older actors have surely been lured by episodic television that showcases their range. For example, 2018 Zoomer cover subject Bruce Greenwood, 64, plays eminent head surgeon Randolph Bell in the medical drama The Resident. In addition to that network series, however, the Canadian character actor has also gone the prestige TV route: you may have seen him earlier this year as another medical pro, acting alongside Mark Ruffalo’s double role as twins in HBO’s I Know This Much is True.

And while we anxiously wait for beloved Canuck actor Rick Moranis, 67, to return from decades away from show business in the upcoming Honey, I Shunk the Kids reboot, here are some of our favourite eminent CanCon talents starring as dignified mentors, feisty matriarchs and paterfamilias.

If we factor in the constant holiday-season replays of The Sound of Music, Christopher Plummer, 90, has technically spent more time on the small screen than most jobbing actors. But his last significant turn in an episodic series was the espionage thriller Counterstrike thirty years ago.

This fall Plummer has a regular series role in the first season of the British-Canadian offering Departure (see image above), a suspense drama about a London-bound passenger plane that has vanished into thin air (airing now on Global). Plummer plays Howard, head of the transport bureau that’s probing the disappearance and mentor to investigator Archie Panjabi (Kalinda from The Good Wife). That the series is a murder-mystery of sorts makes it a fitting follow-up to Plummer’s scene-stealing role as the irascible patriarch Harlan Thrombey — the body in the library at the heart of last year’s hit whodunit film Knives Out.

Plummer’s move to TV is just the latest in a career revival that arguably started a decade ago with his poignant turn as a father coming out late in life in Beginners, for which he won the Academy Award for Best Supporting Actor. “All my friends are going back to television, and it seems to be the fashionable thing to do at the moment,” Plummer said in a recent interview with Canada.com. “Television has certainly upped the bar. For a long time it was kind of floundering, in my view, and now it’s attracting a lot of distinguished and talented people.”

The pandemic, meanwhile, has provided an unexpected plot twist: Departure’s first season was shot on location around Toronto and Hamilton in late 2018 (it’s produced by Canada’s own Shaftesbury Films, the team behind Murdoch Mysteries). A second season began production this fall and Plummer has reprised his role in the ongoing saga of Flight 716. But while the rest of the series cast begin shooting season two around Southern Ontario, Plummer is instead—and like so many of us—working from home. His scenes are written as telephone conversations and a film crew comes to his home in Weston, Connecticut, where Plummer’s own real-life desk does double duty as the set. The show must go on and, even on the cusp of his 91st birthday, the venerable actor is proof that a thriving career is a marathon, not a sprint.

Meanwhile, the series airs its season one finale next Thursday on Global TV and can be streamed in full on the Global TV App and STACK TV.

Filthy Rich is the perfect brazen name for a new television series featuring Kim Cattrall, the Canadian who made Sex and the City’s sassy PR maven Samantha so memorable and unapologetically her own. Cattrall, 64, does the same with Margaret Monreaux, the matriarch of a televangelist dynasty in Louisiana who sets about protecting the family name and fortune with gusto. She’s a quintessential Southern Belle as devout and well-mannered as she is greedy and resourceful (Cattrall has described her as “an iron hand in a velvet glove”).

The delicious complicating premise of the show, which Cattrall also produces, is that while she continues her façade as a wholesome lifestyle TV host (like a Bible-thumping Goop), off-air she’s dealing with the fallout of dirty secrets. After her husband (Gerald McRaney) is presumed dead in a plane crash Margaret discovers that he’s a preacher in the ‘Do as I say Not as I do’ vein and has fathered three illegitimate children.

On a scale of one to Samantha Jones, Margaret’s a seven and has several meme-able moments — including a sequin-clad Cattrall walking out of a mansion she’s set on fire while purring ‘Rot in hell.’ No surprise, then, that Filthy Rich has been received as a guilty pleasure, getting plenty of lockdown love from the right places (though some critics wished it were filthier and richer). “Chief among its pleasures is Cattrall’s performance, which complements her creamy alto with the imperious charisma of a Joan Collins or a Vanessa Williams,” according to Time.

She could have gone bigger and broader — more over the top Moira Rose outfits and chewing the scenery — instead of giving viewers food for thought while exploring the contradictions of faith and the hypocrisy of televangelists. But to her credit Cattrall plays Margaret for nuance with the steely showmanship required of being a powerful woman in a man’s world.

Sadly, however, Filthy Rich will be short-lived. Fox recently announced that, due to high production costs and disappointing ratings, it wouldn’t be renewing the show for a second season. The remaining episodes will continue to air on CTV and they’re Cattrall’s best work since Sensitive Skin. Catch them while you can.

The Canadian received an honorary Oscar in 2017 for his body of work, but Donald Sutherland’s output continues unabated. Don’t call it a comeback — at 85, the Saint John, New Brunswick-born legend remains very much a working actor. And he does it irrespective of screen size.

Sutherland continues to appear regularly in stories large in scope (like with Brad Pitt in the 2019 sci-fi Ad Astra) and intimate in nature (a bittersweet road trip to the Florida Keys in 2017s The Leisure Seeker with Helen Mirren). Alongside Mick Jagger, Sutherland was probably best thing about The Burnt Orange Heresy, the recent European art-heist movie where scenes as an avuncular but sphinx-like reclusive artist have him memorably spouting Yeats and Mathew Arnold.

And while early career classics like Don’t Look Now and Invasion of the Body Snatchers are currently featured in the curated collection of tastemaker Criterion Collection’s streaming channel, that’s not the only place you’ll find Sutherland on the small screen these days.

This fall Sutherland is back on HBO with their new high-profile miniseries The Undoing (now airing on Crave). David E. Kelley last spearheaded Big Little Lies and this psychological thriller has a similar slow burn. It’s directed by The Night Manager’s Emmy (and Oscar)-winning filmmaker Susanne Bier as more of a character study and it’s a pleasure to watch Sutherland in contrast with Nicole Kidman’s understated performance of hidden depths.

In a turn not unlike his tyrannical President Snow in The Hunger Games movies, Sutherland is Kidman’s financier father Franklin Reinhardt, a master of the universe type whose cool patrician façade belies a fierce protective instinct. (It’s the second time he’s played her father — the first was for Anthony Minghella’s film Cold Mountain.)

Unlike many actors of his generation, however, Sutherland isn’t a stranger to prestige TV —he’s won Emmys and Golden Globes for roles in HBO’s Citizen X and Path to War, and his performances in limited series like Ken Follett’s The Pillars of the Earth and Human Trafficking are similarly acclaimed. A few years ago he played the ruthless Africaanz boss of an Antwerp-based diamond cartel in Ice, Antoine Fuqua’s crime drama about the Los Angeles gemstone trade, and more recently he was the cruel paterfamilias J. Paul Getty in Danny Boyle’s mini-series Trust. He even dabbled in soapy prime time drama more than a decade ago as the patriarch of a filthy rich Manhattan clan in Dirty Sexy Money (think: a campier Succession ahead of its time).

In fact, Sutherland was thinking even smaller: Early in 2020 he was cast opposite Kiernan Shipka and Diane Kruger in Swimming with Sharks. The gender-swapped update of the 1994 Hollywood satire was slated for the new Quibi platform of short-form serials for smartphones. But between the pandemic and Quibi abruptly shutting down barely six months into launch, the show’s status is unclear.

Meanwhile, expect Sutherland back on the screen soon, attached to James Gray’s next feature Armageddon Time (whenever it may begin production). And in the meantime, he’s slated for a role in Roland Emmerich’s Moonfall, which has resumed shooting in Montreal. The sci-fi epic stars Halle Berry, Patrick Wilson, and Stanley Tucci, while Sutherland is cast as the gatekeeper (and potential whistleblower) of NASA’s secret Apollo mission archives.

Sutherland and Francine Racette, his wife of 48 years, conveniently maintain a historic second home in nearby Georgeville, Quebec.