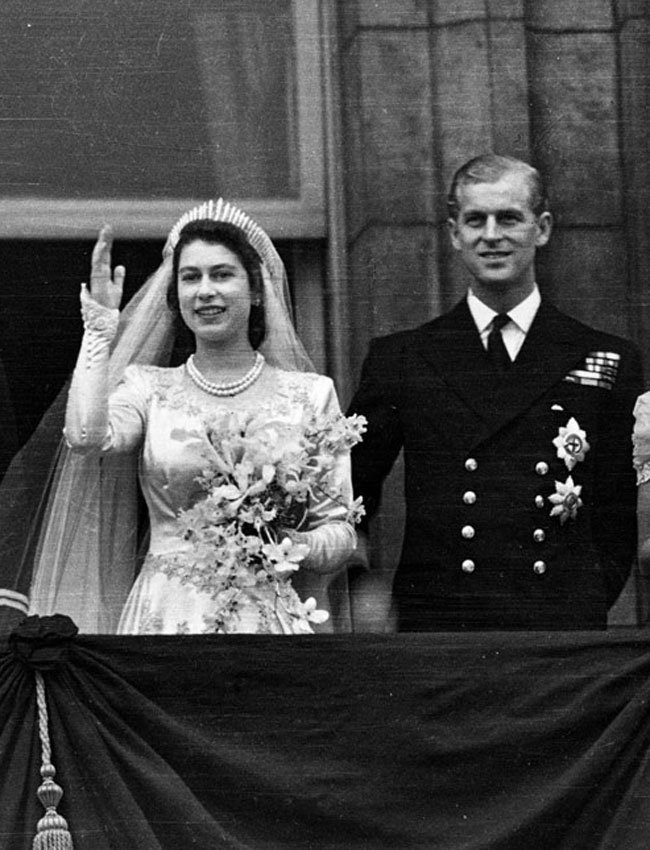 Princess Elizabeth and the Duke of Edinburgh on the balcony of Buckingham Palace, London, waving to the crowd shortly after their wedding at Westminster Abbey. Photo: Central Press/Getty Images

As England enters its second lockdown to fight off the coronavirus, Her Majesty, 94, and Prince Philip, the Duke of Edinburgh, 99, will mark their wedding anniversary (Nov. 20) at home together at Windsor Castle. Here, we celebrate their enduring marriage — the longest partnership in the history of Britain’s royal family — and look back at their fairytale wedding in 1947 that took the world by storm.

Queen Elizabeth II and Prince Philip are celebrating their 73rd wedding anniversary with a note of love from their grandchildren.

In a photo uploaded to the Royal Family social media accounts, the monarch and the Duke of Edinburgh are shown in the Oak Room at Windsor Castle earlier this week reading an anniversary card from their grandchildren, Prince George, Princess Charlotte and Prince Louis, as other cards are scattered on the table before them.

Getty Images royal photographer Chris Jackson, who took the photo, posted it to his personal Instagram account and included a caption that noted how special it was to be invited to photograph the couple as they marked the occasion.

“73 years is an astounding achievement by anyone’s measure,” he added, “and it was touching for me to capture this moment as they took their first look at a homemade anniversary card sent by their Great Grandchildren Prince George, Prince Louis and Princess Charlotte. Congratulations!!”

The anniversary comes just days after Netflix released the fourth season of The Crown, which focuses in large part on the contentious relationship and royal wedding of Prince Charles and Princess Diana. And, of course, decades after their real-life 1981 wedding proved a global event, both of Charles and Diana’s sons, William and Harry, saw the same worldwide enthusiasm surround their own nuptials — to Kate Middleton and Meghan Markle respectively.

But long before that, the wedding of 21-year-old Princess Elizabeth — the eldest daughter of King George VI and his wife, Elizabeth Bowes-Lyon — and 26-year-old Philip Mountbatten paved the way as the first global royal wedding, a televised event broadcast to more than 200 million rapt viewers across multiple continents.

Decked out in a timeless ivory satin gown and trailed by eight bridesmaids, including her younger sister, Margaret, the princess exchanged vows with the dashing Mountbatten before more than 2,000 guests at Westminster Abbey at 11:30 a.m. on Nov. 20, 1947.

The wedding occurred only two years after the conclusion of the Second World War and Britain was still reeling from the aftermath of the Blitz. Rationing was still in full effect and the young princess, ever the frugal royal, had barely saved up enough clothing coupons to purchase her showstopper of a wedding dress.

The gown, designed by renowned British fashion designer Sir Norman Hartnell, was made of soft Damascus Prokar, with a high neckline, tailored bodice and 13-foot short train. Her husband-to-be, a member of the Royal Navy in the Second World War, stood tall in his crisp black and gold uniform.

The eagerly anticipated nuptials proved to be a breath of fresh air for a nation still burdened by rations, fuel shortages and other post-war struggles. When, on July 9, 1947, Buckingham Palace announced the engagement of Princess Elizabeth and navy Lt. Philip Mountbatten, the country rejoiced. The wedding, which took place just four months later, gave England a much-needed boost in spirits as thousands lined the streets of London hoping to catch a glimpse of their future queen. And, to think, the royal family had spent months wringing their hands over whether people would turn out to witness such a lavish wedding ceremony.

Elizabeth was only 13 years old when she first fell for the charming Philip, then an 18-year-old Royal Navy cadet with, she wrote, “piercing blue eyes.” It was 1939, and the young princess was smitten with the fair-haired tennis-playing student at the Royal Naval College in Dartmouth. The rest, as they say, was history.

The first three years of the royals’ married life was largely spent in Malta while Philip continued his military career. Prince Charles was born in 1948, followed by Princess Anne in 1950. (The couple later had two more children, Prince Andrew in 1960 and Prince Edward in 1964.)

On Feb. 9, 1952, as the pair travelled to Australia to represent King George VI at a Commonwealth event, they received word while they were in Kenya that the monarch had died in his sleep at the age of 56. Elizabeth and Philip’s lives were irrevocably changed as the young queen, only 25 years old, took on advisers and tutors and struggled to dedicate herself to her new role.

Despite whispers of infidelity and Philip’s “wandering eye” throughout their marriage, the pair always put on a united front when appearing at public engagements. The rampant speculation as to the status of their relationship never seemed to rattle the pair, and during the celebration of her 50th wedding anniversary in 1997, the Queen paid tribute to her husband: “He is someone who doesn’t take easily to compliments but he has, quite simply, been my strength and stay all these years, and I, and his whole family, and this and many other countries, owe him a debt greater than he would ever claim, or we shall ever know.”