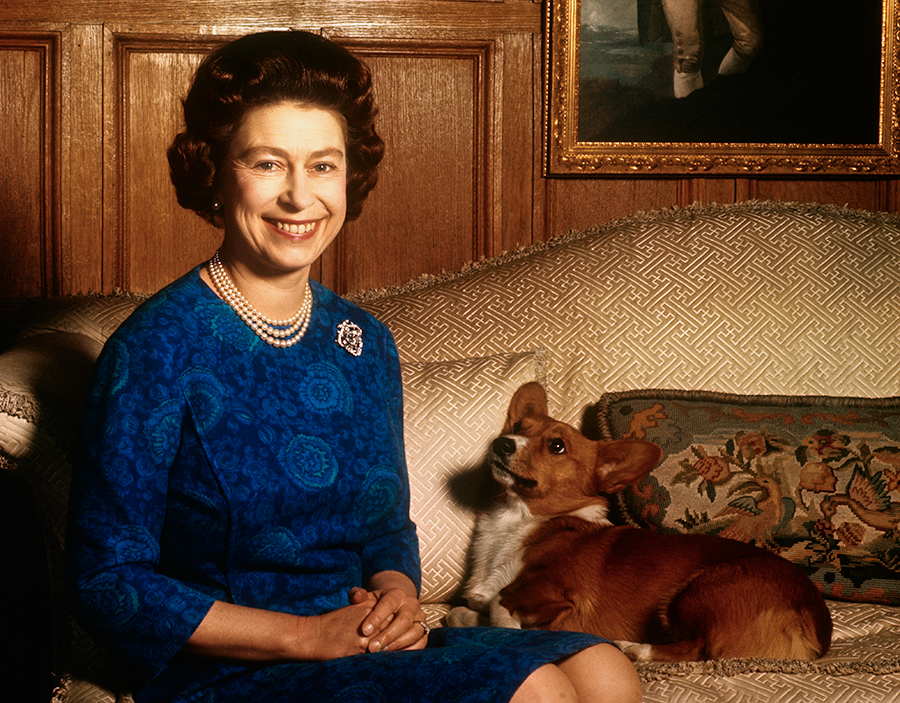 The Queen relaxing with a corgi at Sandringham in 1970. Photo: Bettman/Getty Images

The Queen’s passion for horses is well-documented, both from her jaunts to Ascot to watch her race horses gallop or in her own riding, be it in official capacity during the Trooping the Colour parade or for pure pleasure when she’s off for a hack on her estate at Balmoral. One particular horse, however, became her special mount. Her name was Burmese and was given to the Queen in 1969 as a gift from the Royal Canadian Mounted Police.

The Queen rode the beautiful black mare during 18 Trooping the Colour parades. The horse passed away in 1990 and, to commemorate the bond she shared with the animal, the Queen gifted a handcrafted rocking horse dedicated to Burmese to the RCMP as part of her 90th birthday celebration.

The love of equestrian pursuits seems genetic. Not only did daughter Princess Anne ride for Great Britain’s three-day event team during the 1976 Olympics in Montreal, granddaughter Zara Phillips is also a champion eventer, and Lady Louise Windsor (daughter of Prince Edward) has shown her talent under saddle and in carriage driving.

Of course, the boys aren’t to be outdone: following in their father Prince Charles’s hoof beats, Princes William and Harry are naturals on the polo field.

The Queen is also known for her love of dogs, with the Pembroke Welsh Corgi being her particular favourite. The Princesses Elizabeth and Margaret received their first puppy, Dookie, in 1933. Then, on Elizabeth’s 18th birth day, she was given a pup, The Queen began to breed corgis at Windsor Castle in the ’50s and has owned more than 30 of them.

But there has been some drama; in 1991, the Queen required stitches after breaking up a mass corgi brawl, and in 2003, one of her corgis had to be put down after being mauled by Princess Anne’s dog.

Sadly, her last remaining corgi, Willow, passed away in April 2018 at the age of 14. Her Majesty still has Vulcan and Candy, two dorgis — corgi-dachshund crosses — but Willow was the last link to the Queen’s original royal corgis.

During Prince Harry and Meghan Markle’s engagement interview, the Duke of Sussex joked, “The corgis took to her straight away. I’ve spent the last 33 years being barked at — this one walks in, absolutely nothing.” Meghan, who has two dogs herself, responded: “They were laying on my feet during tea!”

With Bogart adopted by friends, Meghan’s other rescue dog, Guy the beagle, was rumoured to have hitched a ride to Windsor with the Queen, when a dog was spotted in the backseat with the Monarch the day before the wedding. Guests also reportedly told tales of Guy racing around the reception eating any leftovers that came his way.

Looks like Meghan has at least one thing in common with her grandmother-in-law. The Monarch liked to travel with her dogs, such as during her holiday jaunt to Balmoral in 1974.