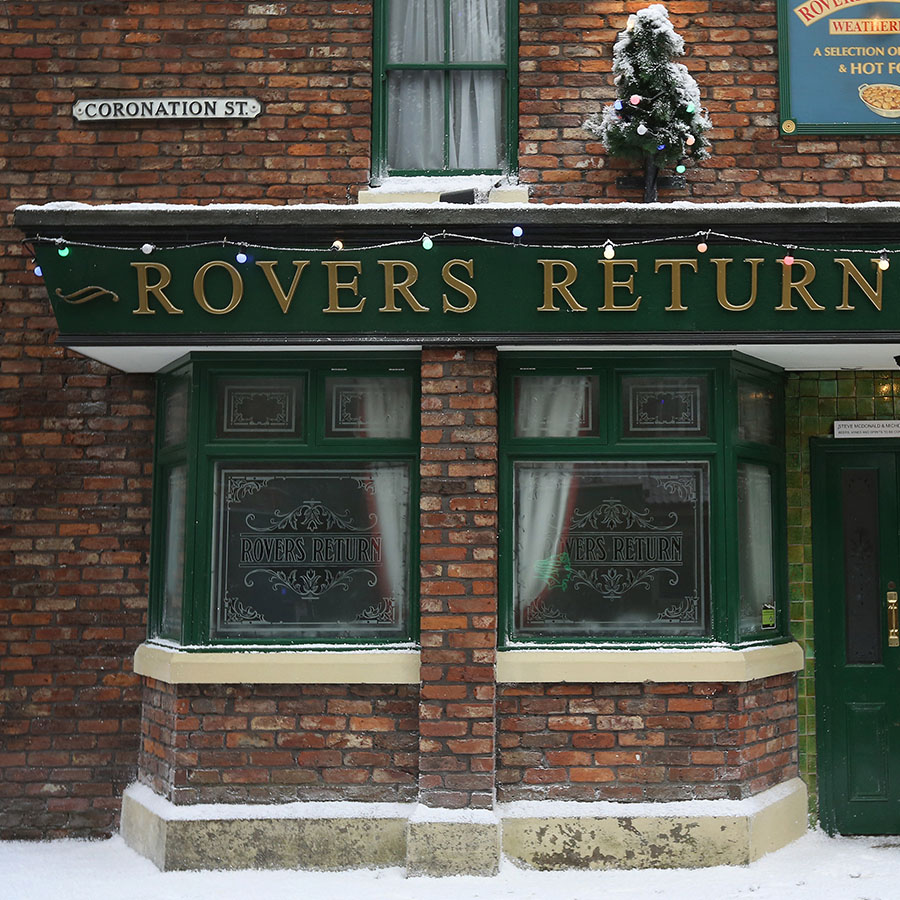 Crowned the world’s longest-running soap opera by Guinness World Records, tales of the residents of the fictional northwest town of Weatherfield have played out for six decades on the set’s famous cobbles. During that time there have been 57 births and 146 deaths, and it’s doubtful that any of the 131 weddings have gone ahead without some kind of drama. Which, of course, is just how the fans like it. Not to mention the writers, who never tire of tangling characters in affairs, dastardly deeds and heartbreak as overheard conversations, blurted secrets and the arrival of long-lost relatives often turn the complex plots. These days that’s sociopathic abuser Geoff (Ian Bartholomew), whose wife Yasmeen (Shelley King) is on trial for his attempted murder.

Some seven million people in the United Kingdom catch each Coronation Street episode — including, reportedly, Queen Elizabeth II (Prince Charles made a cameo appearance on the 40th anniversary show, which you can see in the video below). The show is also broadcast in 135 other countries, with Canadians proving the show’s most devoted fans outside the UK. About 600,000 people here see it on CBC; it’s the most-watched show on the Gem streaming service.

“Everybody relates to it. I used to watch Corrie with my mom or my grandmother,” says Andrew Stuckless, the Halifax-based producer of Canadian stage interview shows that star Coronation Street cast members.

Stuckless says the show is televised comfort food, like the famous Lancashire hotpot stew served at the Rovers Return Inn, the local pub and heart of the community.

“It’s been on so long, it’s part of the Canadian mosaic,” says Stuckless. People relate to the characters, he says, including the villains they love to hate.

Over the years, Corrie has had its share of firsts, including the first storyline to make front-page news across Britain with the 1983 affair between Deirdre Barlow and husband Ken’s nemesis, Mike Barlow. The show also had its first transgender character, Hayley Patterson, in 1998.

“There is no reason why Coronation Street cannot go on forever if it continues to adapt to what is happening,” he said.

Today’s storylines also reflect the global pandemic. While there are no more steamy kisses in the ginnel (alley) that runs behind the terrace houses, tempers and drama show no signs of cooling.

Of course, with more than 60 years of episodes to choose from, it’s not easy to pick favourites — but we tried. So in random order, here are Top 10 of our favourite Coronation Street moments:

Tracy Barlow (Susan Ford) is the street’s schemer in chief, known for her sharp tongue, craven ways and big mouth. The night she decided to dispatch conniving builder boyfriend Charlie Stubbs with a piece of nearby decorative sculpture while she distracted him with a seductive shimmy was classic Tracy.

Free the “Weatherfield One”

Deirdre Barlow (the late Anne Kirkbride) was one of the show’s most beloved characters, known for her crummy pottery and massive fashion belt collection. Wrongly sent to jail on a fraud charges after a conman posing as a pilot romanced her and wiped her out, British newspapers responded with headlines calling for justice for the “Weatherfield One.”

The Platt family has had no end of complicated storylines. Take Sarah-Louise Platt’s (Tina O’Brien) fraught relationship with abusive, drug-dealing boyfriend Callum Logan (Sean Ward). As he attacked Sarah, her sister-in-law (and his ex) Kylie (Paula Lane) fatally smacked him with a wrench. Callum was stuffed in a manhole under the garage, which was later turned into a granny flat for matriarch Gail Platt (Helen Worth).

The live 50th anniversary episode remains one of the show’s best, with a dramatic tram crash that left the street on flames and strewn with rubble. Beloved butcher Ashley Peacock (Steven Arnold) saves two characters trapped in the rubble after an explosion in the bar at the end of the street, only to be crushed himself. Molly Dobbs (Vicky Binns) dies in a collapsed building, but not before making a breathless confession to Sally Webster (Sally Dynevor) that she’s been having an affair with her husband Kevin (Michael Le Vell) and he’s the father of her baby.

After 12 years together, transgender Hayley Patterson (Julie Hesmondhalgh) was finally legally able to marry café owner Roy Cropper (David Neilson). Their nuptials included a ride in a vintage steam train and a slew of Corrie-style wedding disasters in an episode packed with humour and heartfelt moments.

The End of Alan Bradley

There’s no shortage of villains doing nasty things on Coronation Street, but the writers always make sure the bad ones eventually get what’s coming to them. When Alan Bradley (Mark Eden) deceives and terrorizes corner shop-owner and singer Rita Fairclough (Barbara Knox), she flees to Blackpool (a favourite seaside holiday spot for Corrie characters) where Bradley tracks her down and kidnaps her. Millions of viewers cheered when the evil Alan was run over by a Blackpool tram.

Gail Platt hasn’t got a terrific track record with romance, but marrying crooked financial adviser-turned-killer Richard Hillman (Brian Capron) was probably the dumbest “I do” of her five failed marriages. After he bludgeoned Maxine Peacock (Tracy Shaw) to death when she interrupted his attempt to kill beloved senior Emily Bishop (Eileen Derbyshire), the horrified Gail calls him “Norman Bates with a briefcase” and tries to flee. Hillman’s desperate last stand sees him driving Gail and her family into the Weatherfield canal. Everybody makes it out alive, except for you-know-who.

The Barlows Help at an Alcoholics Anonymous Meeting

The ongoing battles with alcohol addiction for Ken’s son Peter Barlow (Chris Gascoyne) crop up regularly on Corrie. In this episode, it was played for laughs, thanks to Deirdre’s sarcastic mother Blanche (the late Maggie Jones), who never has a kind word for anyone or anything. When the family decides to go to Peter’s AA meeting to offer support, they end up laying into each other and the meeting attendees while revealing family secrets and bitterly airing grievances. “I need a drink!” Deirdre announces.

The Death of Sinead

Kooky-charming Sinead Tinker Osbourne (Katie McGlynn) was a Corrie favourite and her diagnosis of cervical cancer, rushed wedding to Daniel (Rob Mallard), birth of their son Bertie and eventual death had fans weeping along with every scene.

It can sometimes take a while for a baddie to finally meet their end on Coronation Street. It seemed like serial killer Pat Phelan (Connor McIntyre) would never get his comeuppance as he terrorized half of the street. There was even a red-herring death fall. When one of his victims, Anna Windass (Debbie Rush), finally did the deed, it was the moment fans had been anticipating for years.

Doing It Downton Style: What Life Is Like at Highclere Castle