As Beethoven Turns 250, 9 Ways To Incorporate More of His Music Into Your Life 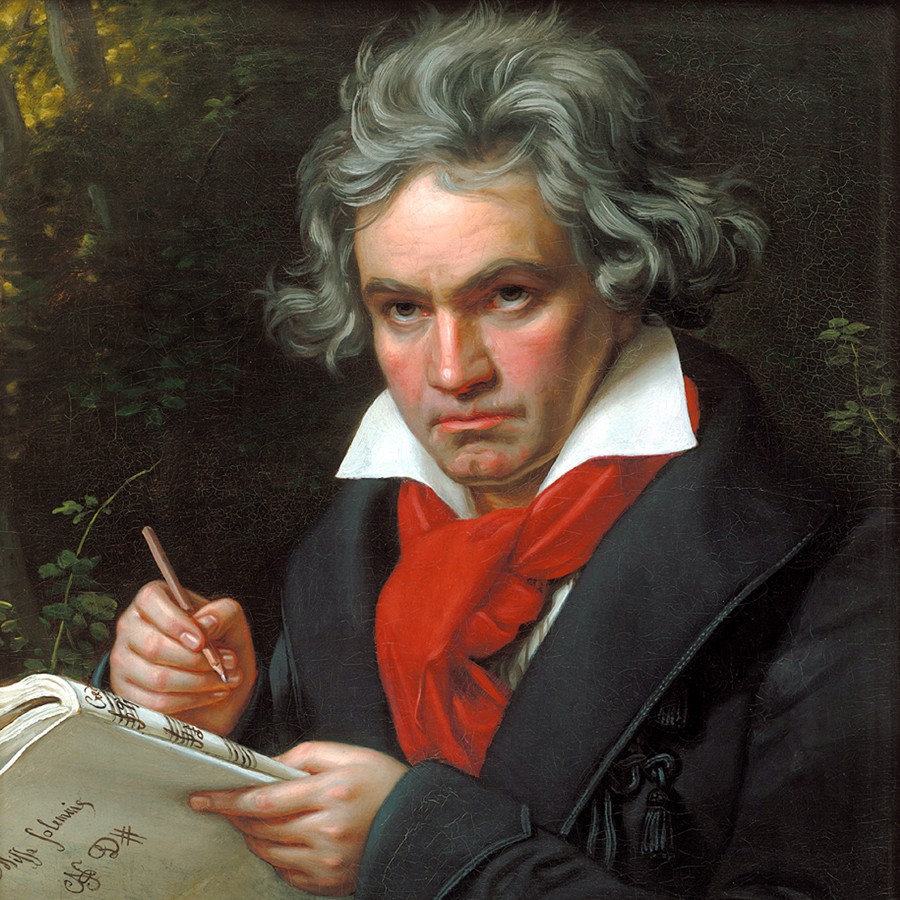 Admire Bob Dylan if you like. And Beyoncé, too. But when it comes to longevity and legacy, it’s Beethoven — whose 250th birthday is celebrated on or around Dec. 17 (his christening date) — who remains music’s most enduring superstar. That said, as classical music continues to shrink from view — how many concerts, not to mention Beethoven’s birthday plans, were cancelled due to the ongoing pandemic? — we must find new ways to experience the legendary composer’s work.

So from using his music for everything from combatting stress to aiding in our daily workouts, we’ve compiled our top nine (as in the number of symphonies he wrote) ways to incorporate more Beethoven into your life.

Da-da-da-DA! The don’t-mess-with-me opening of Beethoven’s Symphony No. 5 in C Minor, Op. 67 is the greatest bit of stress-blasting in or out of music. Dubbed “fate knocking,” the familiar four-note phrase — short-note, short, short, long-note — was used during the Second World War as Morse code for the letter “V” for victory.

Meanwhile, in his own time Beethoven proved defiantly determined to keep his life together while facing his oncoming deafness. As such, he followed the basic rules of stress management, from keeping things simple — all four movements are as fast and sleek as this opening — while finding a way to happiness. What begins in a stormy minor key in the work written 1804-08 ends in optimistic major key.

“Those who understand my music,” he reportedly once said, “must be freed by it from all the miseries which the others drag about with themselves.”

With museums, concert halls and other venues closed due to the pandemic, artists are forced to become more creatively entrepreneurial. In the end, however, self-sufficiency, and the ability to adapt to new realities, is a good lesson for all of us to learn. In this, Beethoven is as ideal a role model as it gets.

First off, he understood self-reliance and the pride that comes with being an independent businessman who was not beholden to the nobility for cash. He also understood mass marketing, having his works published across Europe throughout his life (though he also double-crossed more than one publishers, having the pay back his advances) and the necessity for embracing new technology. To that end, he helped create the modern piano by adding more top and bottom notes, and wrote for musical automata — self-automated music machines. And, he found a way to harness the greatest marketing strategy of all — selling happiness. In fact, according to conductor/composer Leonard Bernstein, “Our boy (Beethoven) has the real goods, the stuff from Heaven, the power to make you feel at the finish: Something is right in the world … something we can trust, that will never let us down.”

Few composers evoke the relaxation of a sweet summer’s day better than Beethoven, who loved heading out into the Viennese countryside. His Symphony No. 6 in F Major, Op. 68, — the Pastoral Symphony — is the composer’s greatest example of scene-writing and head-tripping, where we’re drawn into a bucolic scene out of a painted Nicolas Poussin landscape, only to then hear a summer storm approaching.

The soundtrack for an in-home Beethoven gym experience can be found in the Allegretto second movement of his Symphony No. 7 in A Major, Op. 91.

With its graceful repeated rhythms building to a climax, the hypnotic work lures your body movement in response. But don’t only take our word for it. While Beethoven thought it one of his best pieces, another celebrated composer — Richard Wagner — felt “Its poignancy is almost physical.”

Kids love Beethoven. Like them, he’s loud, messy and suspicious of adults. Early on they learn his simpler pieces, like “Für Elyse.” Later they love the way his music begins and ends with lots of big bangs. No wonder Hollywood named a great lumbering Saint Bernard after him in the Beethoven movie franchise.  He’s also the reason for maybe the best kid-centric music adventure of them all — Beethoven Lives Upstairs, an HBO film made from the original audio book. The story: from downstairs, the 10-year-old protagonist listens to the musical mayhem overhead as the composer, now deaf, pounds home his triumphant Symphony No. 9.

Few composers have generated as much biographic interest as Beethoven. Even fewer have given away their secrets. Maynard Solomon’s Beethoven sets the standard for sifting through the “rich mass” of biography-ready Beethoven left behind. But for those interested in learning about his life, Jan Swafford’s more recent Beethoven: Anguish and Triumph is better at framing the composer in a contemporary context, looking at his acute money-making instincts — he was “the first composer” published over his entire career — and publicity-seeking prowess. “Today’s idea of the composer starts with Beethoven,” says Swafford.

Romance in music differs as widely as it does in life. With Billie Holiday, it’s bittersweet; with Liszt, it’s fire and passion. Beethoven’s different. He doesn’t hang his heart on his whole notes. “He was never out of love,” one of his contemporaries, Austrian musician Ignaz von Seyfried, once noted. Yet he kept the identity of his “immortal beloved” secret, her actual presence in his life only discovered in a soulful letter from Beethoven well after his death. “Love demands everything,” he writes, still not identifying her. This level of mystery is precisely what makes his romantic pieces so delicious, from the “Adagio sostenuto” of the “Moonlight” Piano Sonata No. 14 in C Sharp Minor Op. 27 to the “Largo” from the Piano Concerto No. 1 in C Major Op. 15, or the “Largetto” from the Violin Concerto in D Major, Op. 61. He draws out a languid mood in these works for what seems forever — nobody does slow movements better than Beethoven — while carrying you along for the drawn-out experience.

Play (a little) Beethoven for us

Beethoven was a spectacular soloist but it was his pupil, Carl Czerny, who carried on the composer’s legacy as a pianist of blistering speed and invention. From there, Czerny’s pupil, Franz Liszt, took up the torch and, in turn, taught Moriz Rosenthal, who helped spread the Beethoven legacy to millions of others worldwide. Check out Yuja Wang’s incendiary performance of Beethoven’s Piano Sonata No. 29, the “Hammerclavier” if you want to feel as though Ludwig van is in the room.

Beethoven’s legacy extends beyond just his output during in his lifetime. In fact, those craving more Beethoven are lucky, as his defiant music remains the benchmark for modern talents from jazz pianist Keith Jarrett — who tested his classical chops playing “Moonlight Sonata” — to minimalist composer John Adams. The latter’s Absolute Jest, a concerto for string quartet and orchestra, is based on several Beethoven string quartets and, as he notes, was “a totally spontaneous act for me.” As well, Fantasia on an Ostinato for piano, by Pulitzer- and Grammy Award-winning American composer John Corigliano, samples of the pulsing repetitive factors in Beethoven’s Allegretto “Second Movement” from his Symphony No. 7.

Then there’s the fact that Beethoven has come to represent the archetypal composer in pop culture — from his devotee Schroeder emulating him in the Peanuts cartoons and comic strip to a Farmer’s Dog pet food TV spot, where snippets of Beethoven’s music are used over the slurping of a pack of pooches at dinner. There’s also this 2012 Coca-Cola commercial set to a symphonic Beethoven score, featuring animated polar bears scoring a “touchdown” with a bottle of Coke.

But perhaps the best classical music TV spot ever with Beethoven is one that never actually aired. For years, Doritos held a “Crash the Super Bowl” contest where fans could film their own Doritos commercials and submit them. Then the chip company would pick a winner to actually air during the big game.

In 2013, one fan submitted a Beethoven-themed commercial. The spot, which you can see below, shows Beethoven at the piano chomping on Doritos. Warned by his wife to keep the piano keys clean, he wipes each key with a tissue and accidentally comes up with the world-changing opening notes of Beethoven’s Fifth Symphony. “I like it,” she says.

It wasn’t chosen as the winner, but that doesn’t make it any less entertaining.

Peter Goddard is the author of the book The Great Gould, a portrait of Glenn Gould’s life and work.

Entrepreneur Fulfils Dream to Conduct a Symphony at 70