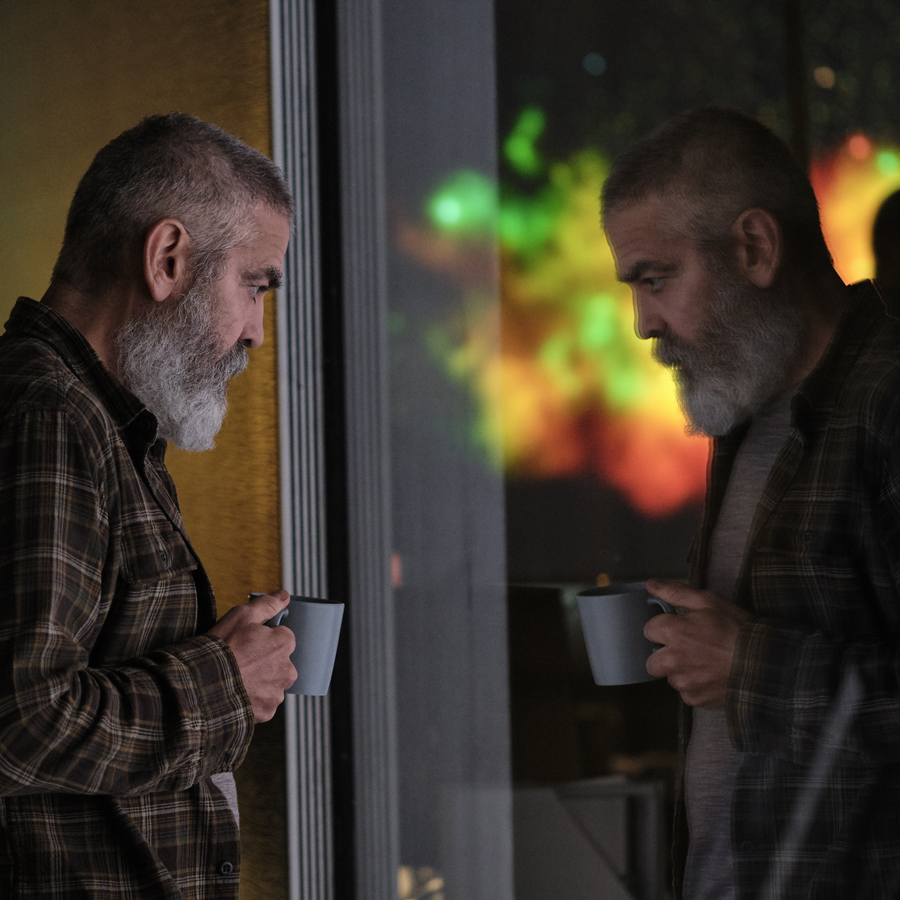 George Clooney, seen above in the film 'The Midnight Sky,' does double duty in the movie as director and star, playing the last man on Earth in a race to stop a space crew from returning home to catastrophe. Photo: Philippe Antonello / Netflix

And space, presumably, cannot quit him.

Having shuttled off to the great beyond twice before — in Solaris and Gravity respectively — the 59-year-old revisits the world of astronauts for the third time in The Midnight Sky. In the film — which sees him pulling double-duty as actor and director — he plays the last man on Earth, racing against time to stop a space crew from returning home to gargantuan catastrophe. As big as it is intimate, the film is post-apocalyptic in its themes but an elegant requiem for humankind in its bones.

“When I talked to Netflix about my take,” the Hollywood legend recent explained during a virtual round-table, his perspective was funnelled through “the anger and the hatred playing in our in lives … all over the world. And playing out over 30 years (the time-line of the film) … denying science, etc., it is not inconceivable that we blow it a big way.”

And then after we finishing shooting (around February), “the pandemic came around, and it became clear that what the movie was enveloping what was our desperate need to be home.”

The themes of the movie, unfortunately, only bristled more since.

Indeed, The Midnight Sky opens with a grizzled Clooney — as grizzled as we have ever seen him on-screen — in the lockdown of all lockdowns: eating a microwaved meal in an empty cafeteria. He stares out into oblivion. It is 2049, some three weeks after disaster has befallen Earth.

Far, far away, in that proverbial other galaxy, is a spaceship made up of a crew, starring a first-rate ensemble that includes Felicity Jones, David Oyelowo, Tiffany Boone, Damian Bichir and a wonderfully expressive Caoilinn Springall as a mute seven-year-old.

“We were shooting two different movies, if you want to know the truth,” Clooney tells us. With his part shot first — in Iceland, late last year — and the spaceship scenes shot at Shepperton Studios in the U.K. early this year, he quips, “it was like doing The Revenant for the first part and shooting Gravity for the second half.

“In a way, it was helpful,” he went on. “If you are prepared, and do your homework, you are not bouncing back and forth between two different worlds.” He cut the film while he shot — “thank God” — which helped in a big way when the production was shut down for good.

All things considered, it was definitely the most complex of the seven features that Clooney has directed to date.

Along the way came a complication, which, it turned out, was an opportunity in drag. Three weeks into shooting in Iceland, the director got a call from Felicity Jones. I have some news, she led: I’m pregnant. Clooney’s first question, after the requisite congrats: So, what do you want to do? I want to do the movie, she told him.

“Our first step [then] was we tried to shoot it without acknowledging it,” Clooney explains. “We tried to do head replacements and shoot around it for a couple days. But … she was desperately trying not to look pregnant. And I woke up in the middle of the night and thought, ‘[These astronauts] go away for two years and people have sex, so she got pregnant.”

So, they wrote it in. Once they leaned into it, the baby her character was carrying became a character of her own in the larger scheme of things. See, for instance, the scene in which the crew on the spaceship builds an ultrasound machine. “We loved it because they are listening for any sign of life (from space) and the only one they are getting is inside Felicity … and it led to the ending (of the movie), which feels like it always should have been there.” A movie that is ultimately about regret — largely due to the character that Clooney plays — became, because of that baby, “infinitely more hopeful.”

Spoken like the gushing, later-in-life father of three-year-old twins!

(Fact: those twins, Ella and Alexander, did pay a visit to the set with their mom, Amal, at one point, though admittedly they did not much understand what the heck was going on.)

The single most challenging thing Clooney had to pull off with this movie would probably be a scene pivoting around what people are referring to as a “blood ballet.”

Without spoiling it too much, suffice it to say it is one that involves droplets and zero gravity. Life and death. “Basically, I went to the effects guy, said ‘I want you to write a blood of ballet,’” he started to explain, adding then, “everything had to deal with that sequence blindly, including myself.”

Because it involved green screens and other technology, it required all the actors in the scene to use their imaginations to grapple with urgent matters of mortality. “I did not have blood on tennis balls with sticks, or anything.”

Clooney laughs that easy, in-on-the-joke laugh that is pure Clooney. That he pulled off the scene in question is under-selling it. Cinema-lovers will see it for it is: one of the most arresting scenes in recent movie history.

A close second in terms of memorable scenes in The Midnight Sky? One that has the astronauts doing an in-space sing-along to Neil Diamond’s Sweet Caroline. Look for it. A ditty, in fact, that contrasts with the wonderfully moody and evocative score that papers the movie as a whole — crafted by Clooney’s friend, composer Alexandre Desplat.

The director is on the record for saying that he did, indeed, pull elements from both Solaris and Gravity for his latest space outing. The dream-like feel of Solaris, as envisioned by Steven Soderbergh, for one, sewed with the technical prowess of Gravity, as envisioned by Alfonso Cuaron.

“Alfonso, arguably, did the best physical version [of space] with Gravity because there is no north or south in space,” he has said. “You’re constantly moving, so the idea was to keep the camera rotating, like he did, but not so much that you make people throw up. It is a trick. And Martin (Ruhe), our cinematographer, had a beautiful plan and worked on it for a long time.”

As for casting the dude who plays a 35-year-old version of Clooney in the movie, as shown in flashbacks? We had to know. How did he go about doing that, given that he was about that age when he broke out on TV’s ER and everyone knows what he looked like? Clooney says he just went for it, in the end casting Ethan Peck (who is actually Gregory Peck’s grandson!).

“He is 6 foot 3 and really good looking,” Clooney finally tells us. “He is a foot taller than me. I said, I am taking him!”