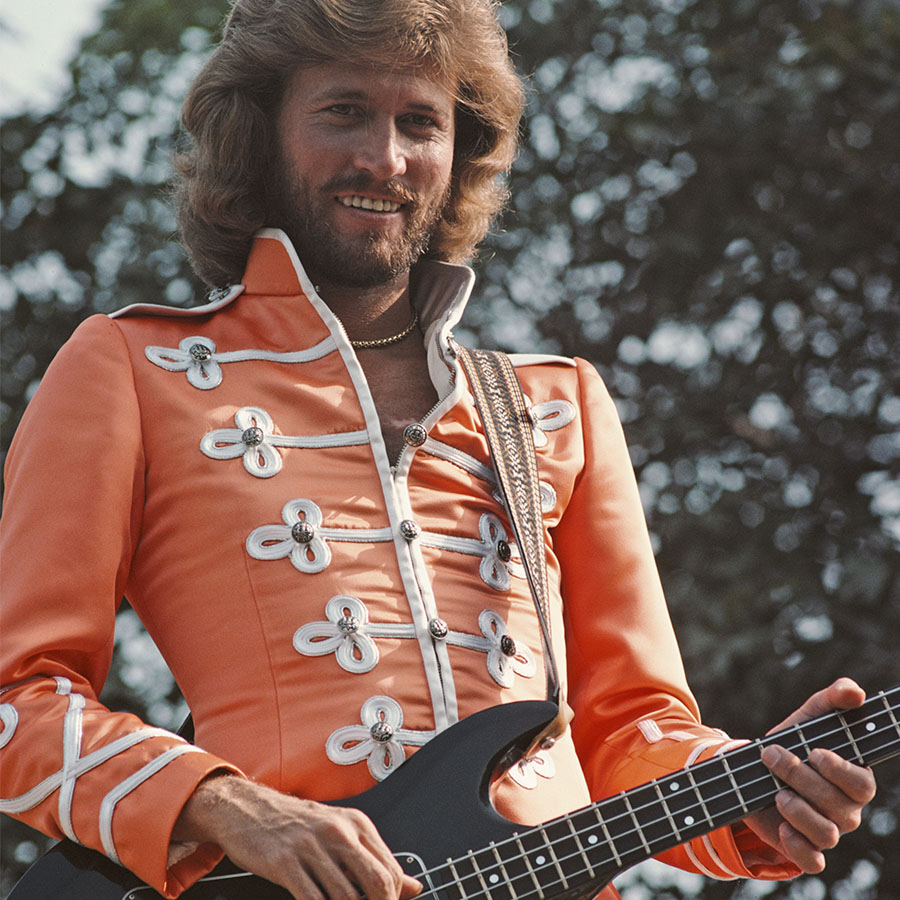 Barry Gibb, seen here on the Los Angeles set of the 'Sgt Pepper's Lonely Hearts Club Band' film in 1977, is back with a new album that reimagines classic Bee Gees tunes with a country twist. Photo: Michael Putland/Getty Images

“I’m still standing and I’m still making records. I love being a part of the music world.” So declared former Bee Gee Barry Gibb in 2016, when Zoomer paid a visit to the music legend’s Florida home to discuss his life and career. And true to his word, five years later, at age 74, Gibb is back with a new album of reimagined Bee Gees tunes called Greenfields. The disc, which drops on Jan. 8, takes the band’s original hits and gives them a country twist, with Gibb — described as “a lifelong bluegrass and country music fan” — employing a roster of stars including Dolly Parton, Sheryl Crow, Keith Urban and Olivia Newton-John to join in.

“Our songs have always had that little bit of tweak of country in them,” Gibb says of the Bee Gees catalogue on a trailer for the new album, which you can watch below. “But a great song doesn’t mean anything unless it’s a great record. There are no formulas. I just wanted it to reflect emotion, light, colour.”

In the trailer, Gibb calls the album “a dream come true” and says, “It’s taken me many years to make this a reality.”

In a separate statement, he noted, “From the first day we stepped into RCA Studios in Nashville (the very place where Elvis, Willie, Waylon, Roy, the Everly Brothers and so many other legends made their magic), the album took on a life of its own.” He also acknowledged his late brothers and fellow Bee Gees, adding, “I feel deep down that Maurice and Robin would have loved this album for different reasons. I wish we could have all been together to do it … but I think we were.”

The first single from the album is the 1968 tune “Words,” which became a No. 1 hit in multiple countries, including Canada, at the time. Gibb teams with Parton, also 74, on the new version, which they shared a clip of on Twitter.

“I tried to choose all of the people that I admired the most. And just songs you love. It’s a song you’ve already known for 35, 40 years,” Gibb explains on the album trailer video. “I’m a collaborator, I’m a bluegrass artist, I’m a country artist, I’m a songwriter and I don’t care what anyone else calls me.”

Of course, the Bee Gees have been top of mind in recent days with the release of the HBO documentary The Bee Gees: How Can You Mend a Broken Heart. Directed by Frank Marshall, the film is getting rave reviews, with Rotten Tomatoes calling it “a poignant documentary that persuasively argues the trio’s importance in music history.” The film rating site also notes the doc has a 96 per cent critical approval and 95 per cent audience approval.

One person, however, who likely won’t be part of the audience is Barry Gibb himself. The only surviving member of the band (his brother Maurice died in 2003 and Robin in 2012), he told CBS Sunday Morning, “I can’t handle watching the rest of my family. I just can’t handle it. Who would? I think it’s perfectly normal to not want to see how each brother was lost, you know? And I don’t want to address it. I’m past it.”

A Bee Gee at 70: Barry Gibb Has a Grand Illusion