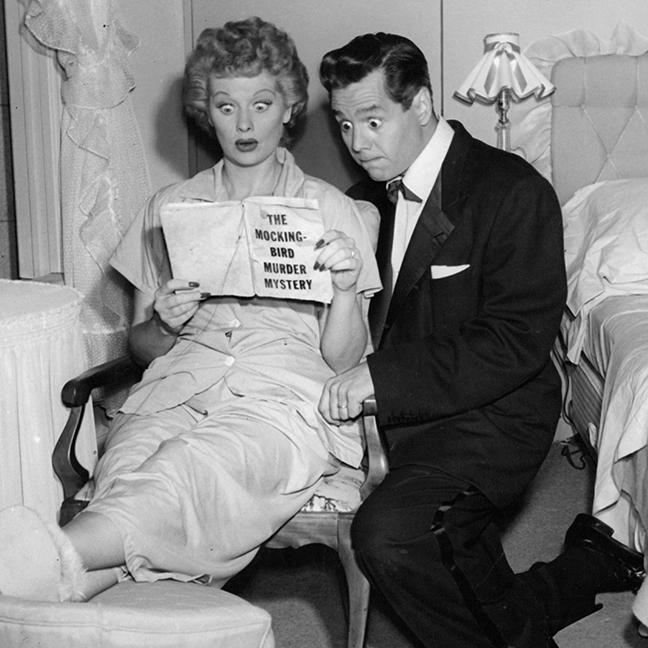 An upcoming 'I Love Lucy' biopic has drawn the ire of some fans with news of the possible casting of Nicole Kidman and Javier Bardem as Lucille Ball and Desi Arnas — seen above in a 1951 episode. Photo: CBS/Getty Images

News of a prospective Aaron Sorkin biopic about Lucille Ball and Desi Arnaz made headlines on Monday when it was revealed that Nicole Kidman and Javier Bardem are in talks to play the legendary Hollywood couple.

Variety reports that the film, called Being the Ricardos, is set during a production week of the show I Love Lucy, during which time the real-life couple “will face challenges that could end their careers and their marriage.”

The news of the biopic — which is co-produced by the couple’s children Lucie Arnaz and Desi Arnaz Jr. for Amazon Studios and directed and written by Sorkin — set off a social media frenzy of opinions about the main players.

To start, some questioned the choice of Sorkin, who is known for his fast-paced, witty, dramatic dialogue on shows he created such as The West Wing and The Newsroom, and films like The Social Network — for which he won the Best Adapted Screenplay Oscar — and A Few Good Men, to write a Lucille Ball-Desi Arnaz biopic.

Journalist Evan DeSimone, for one, commented on Twitter: “I’m not sure I’d pick Aaron Sorkin to write a biopic about one of the first powerful women in Hollywood given that all his female characters seem to be trapped in an episode of I Love Lucy.”

But the most ardent objections to the film revolve around the potential casting of Bardem as Desi and Kidman as Lucy.

The word “potential” is key, as neither Kidman nor Bardem are confirmed. In fact, before Kidman, another Aussie actress — Cate Blanchett — had been pegged for the Lucy role.

And in fairness, casting anyone to play such legendary stars in a biopic is just begging for criticism. People, of course, love Desi Arnaz, but Lucille Ball is a cultural hero to generations — a trailblazer on- and off-screen who broke glass ceilings for women in Hollywood while becoming a major foundational figure in post-war American comedy. Granted, the biopic is centred on the dramatic, behind-the-scenes life of the couple, but it is also expected to include portions of an I Love Lucy episode. As such, fans took to Twitter to voice their displeasure with the prospective casting.

Other fans, meanwhile, pointed to the age discrepancy between Kidman and Bardem. Lucille Ball was 40 when she began I Love Lucy’s six-year run. Desi Arnaz was 34. By contrast, Kidman is 53 and Bardem 51.

Still others are expressing frustration that Will & Grace star Debra Messing — who played Lucy in a 2019 I Love Lucy tribute episode of the sitcom — wasn’t cast as the lead.

Actress Valerie Bertinelli made her feelings on the matter clear in a simple tweet that declared, “Debra Messing was robbed.”

Twitter user @princessandrya added, “I have always thought debra messing looked like lucile ball and when they did the i love lucy tribute episode on will and grace that just really cemented that for me, idk about nicole kidman when theres a straight up lucy doppelganger who happens to be an actress.”

And even Messing herself got in on the action, retweeting many of the messages that suggested she should have been offered the part instead. In one, a fan notes that they are “Choosing to believe that @DebraMessing was unavailable or something.” Messing retweeted it and added, cheekily, “Oh no, I’m available.”

Catching Up With … Keith Thibodeaux, The Last Surviving Star Of I Love Lucy

5 Reasons Why We Always Love I Love Lucy