Designing ‘Dynasty’: How the Style of the Legendary 1980s Series Embodied the Excess of the Decade 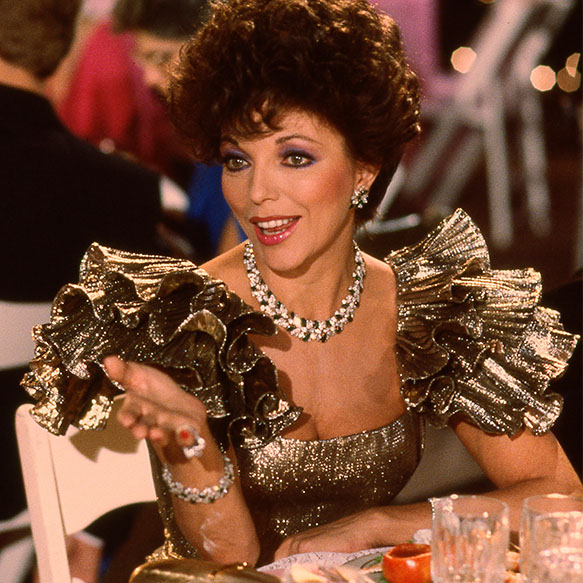 British born actress Joan Collins on the set of the soap opera 'Dynasty' — in which she payed the scheming Alexis Carrington Colby — in 1985. Photo:nik wheeler / Contributor/Getty Images

Forty years ago — on Jan. 12, 1981 — the iconic television series Dynasty premiered on ABC. And while the 1980s were brimming with TV shows and films about wealth and greed — think everything from Dallas to Lifestyles of the Rich and Famous to Wall Street — Dynasty, which centred on the family of billionaire oil tycoon Blake Carrington (played by silver fox John Forsythe), perfectly encapsulated the opulence and excess that helped define the decade.

Blake had just married his beautiful young bride Krystle (played by the angelic blonde Linda Evans) and the two lived in a picturesque mansion complete with personnel that could rival Downton Abbey. They were chauffeured in a fleet of Rolls-Royces, flew in private jets and rode prized Arabian horses that cost more than most people’s homes. The show was broadcast in 80 countries and topped the U.S. TV ratings by 1985, creating a worldwide phenomenon.

To make sure the wardrobe matched the luxury setting, producer Aaron Spelling hired costume designer Nolan Miller, a long-time favourite of Hollywood’s glamorous leading ladies of the bygone era. Miller was given a record $30,000 budget for each episode (almost a million dollars today!). With Miller’s extravagant designs, Dynasty’s billionaire lifestyle vision came to life — and went into overdrive once Blake’s ex-wife Alexis (played by the English spitfire Dame Joan Collins) arrived in the show’s second season. With the addition of Alexis, one of television’s earliest and most popular anti-heroes — a vengeful businesswoman you loved to root for — the show’s ratings skyrocketed and Collins became the bonafide style icon of the decade.

The legacy of Dynasty — which ran for nine seasons before being rebooted in 2017 with a new cast to mixed reviews — goes far beyond the show’s record-breaking ratings. For example, it’s the first television show to spawn a series of luxury products under its licensing umbrella.

In January 1984, 20th Century Fox publicly presented the first licensing deal for Dynasty-branded merchandise with a glamorous fashion show. The collection was based on the show’s two leading ladies, Krystle and Alexis. The two women represented the opposites of femininity: Krystle was the all-American princess, a statuesque blond of athletic build, and Alexis was a foreign vixen, a petite brunette with a penchant for business and an appetite for men (over the course of the series, she accumulated four ex-husbands).

Miller dressed Krystle in soft pastel hues and flowy fabrics while Alexis was often seen in structured power suits with over-the-top shoulder pads, inspired by a former client of the costume designer, the legendary actress Joan Crawford. The outrageously lavish fur from the collection may not have sold in large quantities, but plenty of the other items exceeded expectations.

According to fashion historian Laura McLaws Helms in an essay titled “Krystle and Alexis: The Princess and the Queen Bitch in Dynasty,” one female tuxedo pantsuit sold over 900 units at Beverly Hills Saks Fifth Avenue. The evening wear also did particularly well. Ranging from $100 for a silk blouse to $1,200 for a gold lame dress with a matching brocade jacket with fur cuffs.

Dynasty’s emphasis on footwear was also strong, with the camera often panning on the women’s legs as they walked. Alexis was often seen in low, business-appropriate pumps, although she also loved a good knee high boot, while Krystle, an avid equestrian, often reached for her riding boots.

Of course, much of the glamour came from the show’s glistening jewels. Krystle and Alexis were rarely seen without sparkling baubles — they sometimes even slept in them. Miller’s costume jewellery collection became so successful that he continued its production long after the series ended in 1989. For much of the ‘90s, he was a regular on the QVC shopping channel in often sold-out segments.

One could also choose to smell like money, with a his and hers perfume called Forever Krystle by Carrington. According to McLaws Helms’ essay, Forever Krystle was the top selling fragrance in the US for two years, beating such classics as Chanel No.5. Forever Krystle was concocted by the legendary Charles of the Ritz, with notes of mimosa, musk, bergamont and rose. It sold for a hefty $150 an ounce.

Ultimately, Dynasty was selling fantasy, literally. And ever since, no other show has managed to top its licensing empire.

And some of the items are still kicking around. Forever Krystle is still in production. And one can still get the Dynasty edition Krystle and Alexis Barbie dolls from Mattel.

As for the clothing and the jewellery? They are mainstays on eBay and Etsy. So, if you ever feel like playing out your Dynasty fantasies, 40 years later, you still can.

Anya Georgijevic is a style and design writer based in Toronto. Inspired by Alexis Carrington Colby’s enviable wardrobe, she launched an Instagram account, @whatalexiswore, as a catalogue of each outfit worn by the character.

Who Shot J.R.? Remembering the Summer of the Ultimate Cliffhanger 40 Years Ago