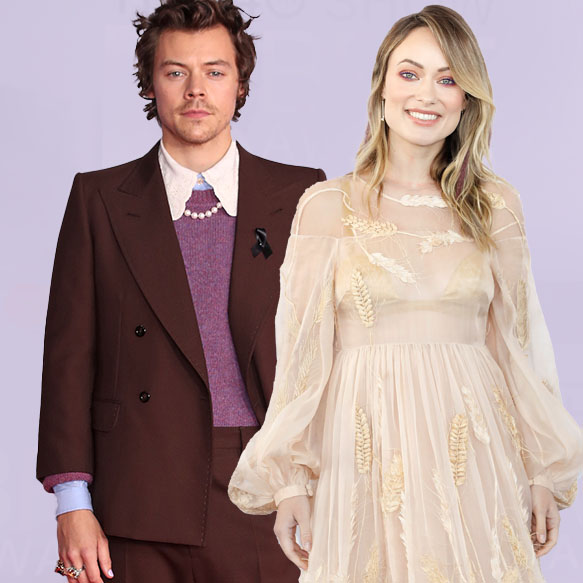 This year’s hot new couple alert — Harry Styles and Olivia Wilde — was a bright distraction from the bedlam of American insurrection drama. The gorgeous-people hookup is also the perfect fantasy fodder to counter lockdown doldrums. They quickly earned the sobriquet Holivia—a handy elision of their first names—and are most notable for their reverse May-December arrangement.

Heartthrob Styles, 26, has surpassed his boy band roots in One Direction and is now enjoying a flourishing solo career. He has also made his mark as a gender fluid fashion icon and Gucci muse. A decade his senior, Wilde, 36, emerged from her acting career (where she was most often typecast as the “beautiful girl”) to become a director of nuanced indie films with her 2019 debut Booksmart.

Wilde is, in fact, Styles’ boss right now: she chose the crossover actor (he acquitted himself very well indeed in Christopher Nolan’s 2017 epic Dunkirk) for the male lead in her second directorial outing, the just-wrapped psychological horror feature Don’t Worry Darling. Like many romances that have sprung out of on-set camaraderie (Mr. and Mrs. Smith, anyone?), there is the added gossip element of potential adultery. The exact timing of when Wilde left her longtime fiancé (and father of her two young children) comedian Jason Sudeilkis, 45, has been the subject of intense tabloid interest. (Sudeikis is reportedly “heartbroken,” about his partner’s new relationship; there are varying reports—all from unnamed sources—that Holivia has been a thing “for a few weeks,” and that Wilde and Sudeikis split either early in 2020 or in November 2020.)

But frankly that kind of speculation about overlap in romantic entanglements obscures the really juicy thing going on here, and the reason we are all so interested: the new calculus of celebrity when it comes to an older woman and a younger man dating.

We are so used to old guys with hot young chicks on their arms; especially in Hollywood, that it is a tired cliché. Women with younger men are generally relegated to the demeaning and crass category of cougar, from Mrs. Robinson on down. Trailblazers such as Joan Collins (who is 32 years older than Percy Gibson), Debora Lee-Furness (13 years senior to Hugh Jackman) and Brigitte Macron (24 years older than Emmanuel Macron) all have suffered the side-eye of disapproving coverage. Cher, of course, belongs in the hall of fame of women dating younger men, though none of them have stuck: from Tom Cruise to Richie Sambora to Val Kilmer, all those paramours were more than a decade younger; her most recent squeeze, a Hell’s Angel’s biker named Tim Medvetz, was 24 years her junior.

But there is a new wave of empowered women who are helping to turn the tide of opinion and open minds—think Lisa Bonet, 53, and Jason Momoa, 41; Gabrielle Union, 48, and Dwyane Wade, 38; and most especially (and directly relatable to the Wilde/Styles circumstances) director Sam Taylor-Johnson, 53, and her partner, actor Aaron Taylor-Johnson, 30. The pair met when Sam cast Aaron as the lead in her film, Nowhere Boy, when he was just 19. Today, they have been married for 8 years and have two children. They are the living proof a flipped May-December can work for the long run. Then there is the love story of Sarah Paulson, 46 and Taylor Holland, who just turned 78 this week. The actresses — who met on Twitter in 2015 — have helped break down barriers to acceptance of not just their 32 year age difference but as a high-profile same sex couple with their glittering red carpet appearances together.

Wilde and Styles look fantastic together and were first outed as a couple while attending the (small, COVID-era, masked) wedding in Montecito of Styles’ agent. They wore his and hers Gucci — he is a flared leg suit and she in a romantic, 70s-flavoured, floral and crochet maxi-style dress. They held hands; Styles also held a tumbler of Scotch.

Wilde had also previously come to Styles’ defence on social media following the strident conservative pundit Candace Owen’s criticism of Styles’s Vogue cover, for which he wore a Gucci ballgown. “There is no society that can survive without strong men … Bring back manly men,” was Owen’s assertion that drew the actress’ ire. Wilde’s retort: “You’re pathetic.”

She went on to say to the media about getting Styles for her film: “I hope that this brand of confidence as a male that Harry has — truly devoid of any toxic traces of masculinity — is indicative of his generation and therefore the future of the world.” Styles is the spiritual heir of David Bowie and Mick Jagger — the androgynous, gender-bending, lover of flamboyant costuming. He looks so good in the gear, he is making a political statement without saying a word.

What’s Age Got to Do With It?

Styles has been romantically linked to Taylor Swift (though many think that was a publicity stunt), as well as Kendall Jenner. But it is an early hookup with British presenter Caroline Flack (who committed suicide last year) that stands out now as he again dates an older woman: Flack was well into her 30s when Styles, then 17, met her at his debut on the reality contest show X Factor in 2011.

There is also Styles’ very public obsession with Stevie Nicks: he says “Dreams” was the first song he ever learned. In 2019, he was the presenter to induct her into the Rock & Roll Hall of Fame, calling the 72-year-old diva “everything you’ve ever wanted in a lady, a lover and a friend.” In return, Nicks gushed about the young crooner, calling him her (metaphorical) “love child” with Mick Fleetwood.

In fact, Styles said in a 2012 interview of women and age and dating, that the only woman too old for him to go out with would be someone older than his own mother. For the record, his mom is now 53.

Styles also has his own power: he does not need an older woman to lend him any. Wilde, for her part, is his equal in Hollywood and entertainment world mojo — the beautiful woman who was best known for a stint on The O.C. and her breakthrough role as a doctor dubbed “Thirteen” on the long-running TV series House. She also starred in Tron, and was the rock-star girlfriend in Vinyl.

A political activist, Wilde used her platform to advance the cause Artists for Peace and Justice. She is related to the late British satirist Evelyn Waugh, and was raised in Washington. Her father, a British journalist, kept company with the famous, from Jagger to Salman Rushdie; Christopher Hitchens was her babysitter. Before she paired up with Sudeikis, with whom she shares son Otis, 6 and daughter Daisy, 4, Wilde was married to an Italian Prince Tao Ruspoli, son of the Prince of Raspoli.

But it was her directorial debut, the winsome and deft Booksmart, a coming-of-age story starring Kaitlyn Dever and Beanie Feldstein, that put her into a Hollywood power broker position.

Styles, meanwhile, goes from strength to strength — he seems like an old soul who certainly doesn’t need any “mothering,” which is one of the cliches bantered about when young men are attracted to older women.

This whole scenario is inspiring as it opens up possibilities. It means that older women can appreciate the charms of a charismatic star such as Styles, without feeling smarmy about cradle-robbing. But mostly, we all want to see whether this beauteous, Guccified coupling has legs, because there will be a wealthy of chic fashion moments — and hopefully more career highs — to cheer on from the sidelines.

Between the Lines: Andrea Martin on Family, Anxiety and Dating a Man 29 Years Younger