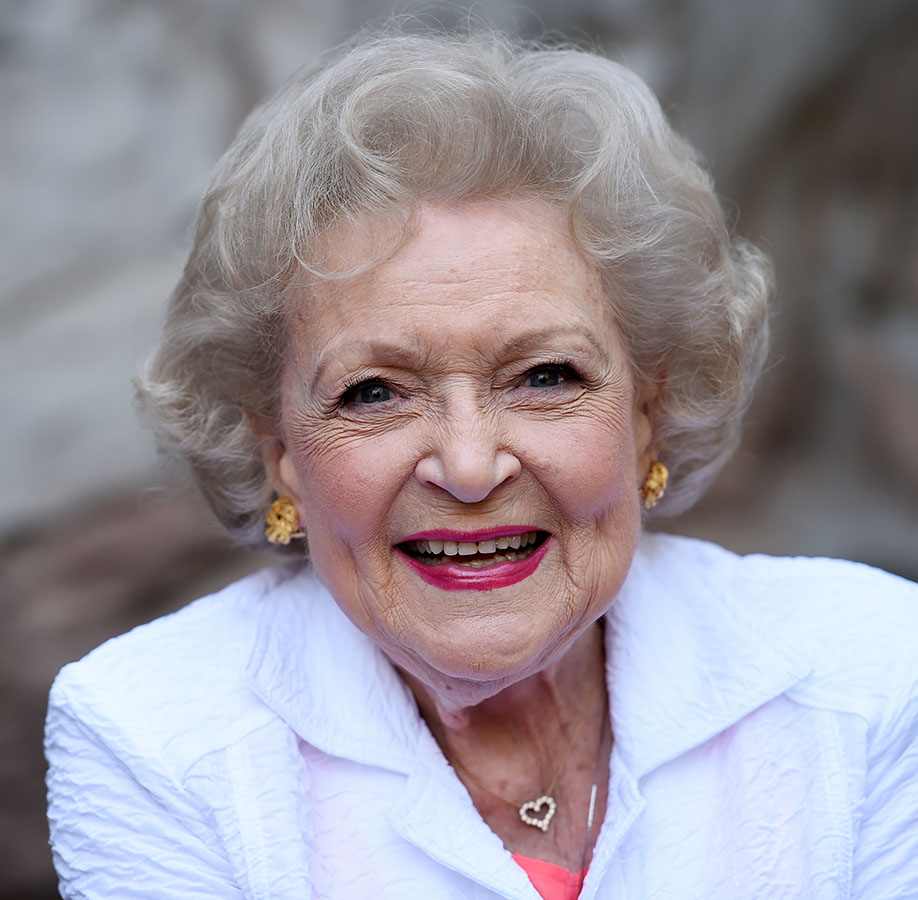 As Betty White, seen here in 2015, turns 99, we look at lessons from her extraordinary life that can teach a thing or two about happiness and longevity. Photo: Amanda Edwards/WireImage via Getty Images

“I was there when television first started,” beloved actor and comedian Betty White jokes in her memoir If You Ask Me. “We grew up together.”

She’s not kidding. White, who turns 99 on January 17, has spent nearly 75 years in show business and has the Hollywood Walk of Fame star, lifetime achievement awards, SAGs, and Emmys to prove it. Heck, she’s even got a Grammy. “It’s incredible that I’m still in this business and you are still putting up with me,” White said after the standing ovation at the last public appearance she made, the 2018 Emmy Awards.

White remains best known for The Golden Girls, the now-classic sitcom starring herself, Estelle Getty, Bea Arthur, and Rue McClanahan as four senior women sharing a Miami bungalow (and cheesecake) and whose friendship is the strongest bond in their lives. Whether or not you believe — and many do — that Sex and The City is simply a reboot of The Golden Girls in a different zipcode, White always steals the scene in her Emmy-winning role of guileless Rose Nylund with naïve anecdotes of her childhood in a Norwegian farming settlement in Minnesota: “Back in Saint Olaf…”

The veteran of television and radio still has a taste for vodka martinis, hot dogs, and a perennial wish — always delivered with her signature blue-eyed twinkle — for “Robert Redford” as her birthday present. “Running a mile each morning has been curtailed by COVID,” White quipped to Entertainment Tonight recently about her quarantine birthday plans, adding that instead she’ll be feeding the two ducks who come to visit her every day.

So what’s the secret to Betty White’s longevity? As she inches closer to the centenary club, we take some lessons from her life.

Make All Kinds of Friends (And Keep Them)

White cultivated and maintained treasured friendships across generations, from Mary Tyler Moore and Carl Reiner (who, by coincidence, served in the army alongside her late husband Allen Ludden) to her co-stars of all ages. After making The Proposal in 2009 with Sandra Bullock and Ryan Reynolds, for example, they remained in touch as good friends — and the A-listers even sent her humorous birthday greetings last year, which you can watch below.

Be Kind to Animals

In Betty & Friends, one of the several books White has written, the ‘friends’ are animals and the tome is equal parts love letter to zoos and pet memoir. Like her contemporary Doris Day, White has devoted much of her time to animal-rights activism. On a 1954 episode of her daytime series The Betty White Show, she dances with Rin Tin Tin (fun fact: she had a recurring role in the popular Rin Tin Tin radio show). White even turned down a role in the 1997 Oscar-winning film As Good as It Gets because of the scene in which a character throws a dog down a laundry chute (because director James Brooks wouldn’t change it). As she once told Barbara Walters she prefers the company of animals. “Can you blame me? Animals don’t lie. Animals don’t criticize. If animals have moody days, they handle them better than humans do.”

Get a Pet (or a Menagerie)

“You’re never too old to adopt a pet if you look ahead and make arrangements for their future,” she has said. “Then relax and enjoy each other.” Of White’s many, many, many shows and projects over the years, one remains a favourite because it combines her two loves: acting and animals. In 1971 White conceived of, wrote, and produced The Pet Set, a weekly television series that featured celebrity friends and their pets as well as wild animals.

It’s been unavailable for decades but to mark its 50th anniversary next month, Betty White’s Pet Set will be released for the first time on DVD (Feb 23, also on iTunes, Prime Video and other digital platforms). Guests include Lucille Ball, Agnes Moorehead, Vincent Price, Jimmy Stewart, Carol Burnett and even Marcus Welby, M.D. star James Brolin and Buck, his harlequin Great Dane. “I’m thrilled it’s going to be seen again after all these years,” White said in a statement.

Alongside fellow funny ladies Lucille Ball and Edie Adams, White was a rarity in the early days of television: a female producer. “We didn’t really think about gender as much in those days,” she told Zoomer a few years ago. “There was a job to be done and whoever was there did it.” That may be so, but on Life with Elizabeth (1953), the first show White starred in and produced, the director was a woman — Betty Turbiville. That wasn’t White’s only pioneering move: she’s also the first woman to win an Emmy as a game show host, for 1983’s short-lived Just Men!.

And remember when Phoebe Waller-Bridge’s feisty Fleabag swept the Emmys last year, and was praised for its clever breaking of the imaginary fourth wall? White was doing that back in 1952! In the format of her live situation comedy Life with Elizabeth, every show ended with her on-screen husband’s exasperation. At which point the offstage announcer would ask “Elizabeth! Aren’t you ashamed?” And every time, White would shake her head and look directly into the camera at the TV audience and slyly flash a grin that said no, no she wasn’t.

White readily admits she has an ‘obsessive addiction’ to crossword puzzles: “I chalk [it] off as mental gymnastics.” Over the run of The Golden Girls, she and co-star McClanahan often passed the time on set between takes with word games; during lunch breaks on the Hallmark movie The Lost Valentine, White and co-star Jennifer Love Hewitt played Scrabble. According to recent updates, White has been staying sharp while self-isolating at her home in Carmel, California, reading the newspaper and avidly doing crossword puzzles. The upcoming Betty White’s Pet Set notably features bonus materials about her stints on many game shows such as Password, where White was a longtime guest and made a personal romantic connection with the host Allen Ludden: he became her husband.

A healthy curiosity and openness to adventure are invigorating. In recent years White’s impeccable comic timing and impish wink have made her a popular guest on the late-night circuit. In fact, her comedic range is quite wide, beginning with the chipper and ‘sickeningly sweet’ newlywed from Life with Elizabeth (which won White the first of her seven Emmy Awards, for Best Female Personality, in 1953). White has talked about how much she welcomed the change of persona to play happy homemaker Sue Ann Nivens on The Mary Tyler Moore Show: “The neighborhood nymphomaniac was a surprise to everyone (including me!)” Fun fact: because of that character, White was originally offered the part of Blanche on The Golden Girls and Rue McClanahan that of prudish Rose. Can you imagine?

Keep up with the Times

White has picked up generations of fans through syndication (there was a time when The Golden Girls reruns were on four times a day!) and now that it’s on Amazon Prime it’s a phenomenon again. (For the beloved series’ 35th anniversary last fall, all seven seasons landed on the streaming service.) But White (and her agent) also have a knack for staying culturally relevant. Sure, she’s starred in ensemble hits across different decades — The Mary Tyler Moore Show, The Golden Girls, and Hot in Cleveland. (Of this she has written: “One of those in a lifetime is a blessing, two of them is a privilege, but three out of three? I owe someone, big time.” But alone that can’t account for why, at a screening of her last feature film, You Again, fans of all ages donned Betty White masks.

One thing that’s helped White’s popularity bridge generations is familiarity — through cameos and guest roles in zeitgeisty shows of every era. That includes appearing on The Simpsons as herself to roles on 30 Rock, Ugly Betty, Everwood, The Practice, That ‘70s Show, King of the Hill, The Ellen Show, Ally McBeal, Suddenly Susan, Matlock, Mama’s Family, St. Elsewhere, The Love Boat and even The Sonny and Cher Show. Even a partial list is staggering. And that’s not all. She’s embraced and kept pace with trends in reality TV, earning an Emmy nomination for her hidden camera series Betty White’s Off Their Rockers. Like friend, former co-star and fellow nonagenarian Ed Asner, White is also active on Twitter and Instagram.

There was admittedly a Bettymania revival in 2010 after she did that Snickers Super Bowl commercial, started a new hit series, and became the oldest person ever to host Saturday Night Live (over the years White had turned down the invitation to host three times; when she finally did the gig it won her a seventh Emmy Award).

Don’t call it a comeback—as White has pointed out many times, she’s been working steadily the whole time. She’s even admitted a certain reluctance to refuse any viable job offer. White has played a professor on cult comedy Community, been melodramatic on The Bold and the Beautiful, and even once sang on the ill-fated Charlie’s Angels series reboot. “Why should I quit doing something I love doing to sit around and say, ‘What should I do with myself?’ It’s such a privilege to be working at this age.”

And brag about it. “I have never lied about my age, but these days I seem to work it into conversation at the drop of a hat.” In her most recent charming memoir If You Ask Me, White also admits that she had her eyes ‘done’ in 1976 but other than dyeing her hair, hasn’t done anything else. She keeps it natural. “If one is lucky enough to be blessed with health, growing older shouldn’t be something to complain about,” she adds. “If you are still functioning and not in pain, gratitude should be the name of the game.”

White credits her sense of humour with keeping her going. That doesn’t mean you need to make a TikTok with the grandkids every day but take a cue from White, who has seen and done it all — including commercials for Geritol and 7-Day Diet Plan — with a wicked sense of humour. Laughing and smiling is good for you! White doesn’t take herself too seriously and leans into her funny bone — like her Friars Club Roast, where she made a grand entrance by arriving on a white pony (like the geriatric version of Bianca Jagger at Studio 54). Or the fact that the menu at legendary L.A. restaurant Pink’s Hot Dog’s includes a hog dog in her honour — with no condiments, just the way she likes it — called the Betty White Naked Dog. Or this Cribs spoof she did, at 95, that leads viewers through her home.

As White once put it to Parade magazine, she’s a “cockeyed optimist.” She always looks on the bright side of life. “I don’t like the other side,” she recently told People. Not that self-isolation has been easy: White added that she is looking forward to “visiting with close friends and bringing food to my animal friends” once it’s safe to do so again.

Aging Then and Now: Lessons From The Golden Girls 35 Years After Its Debut