Long May She Reign: Celebrating the Calming Influence of the Queen 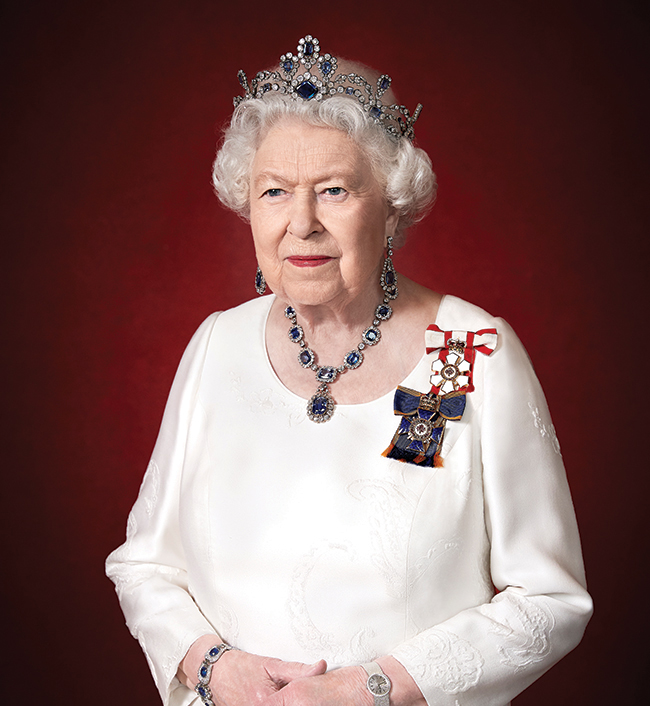 The new official Canadian portrait of Her Majesty Queen Elizabeth II was the first taken since 2012 to mark Her Diamond Jubilee. Photo: Chris Jackson/Getty Images

Queen Elizabeth II ascended to the throne upon the death of her father, George VI, on Feb. 6, 1952 (though her coronation was held the following year). In this feature from the January/February 2021 issue of Zoomer magazine, we look at how Her Majesty’s steady hand in the face of crisis — first honed during her time as a mechanic during the Second World War — helps us to keep calm and carry on.

However 2021 unfolds, it opens on a note of optimism and hope as exemplified by Queen Elizabeth II, who has met the pandemic with equal parts aplomb and grace.

As Canada’s monarch approaches 69 years on the throne in February and her 95th birthday in April, she has stayed the course, even as her son Prince Charles contracted COVID-19 – and now, we find out her grandson, William, too – as well as her Prime Minister, Boris Johnson.

With the fractious fallout from Prince Harry and Meghan Markle’s renunciation of The Firm and their move to Los Angeles, not to mention Prince Andrew’s questionable relationship with the late, disgraced financier and sex trafficker Jeffrey Epstein, 2020 was looking like another annus horribilis for the Royal Family. Then the pandemic hit, and all of us were scared and vulnerable. That’s when Prince William and Kate Middleton stepped up, taking on the
lion’s share of public-facing video duties and enlisting their little princes and princess – George, Charlotte and Louis – to help thank health-care workers, save the planet and mend the Royal Family’s tattered reputation.

With Johnson in hospital on April 5 and the country in a state of high anxiety, the Queen appeared in a televised coronavirus address to applaud front-line workers and urge her subjects to stay resolute in the face of lockdown restrictions, evoking Dame Vera Lynn’s wartime song of hope and optimism and Britain’s resolute response to the Blitz. “We will be with our friends again; we will be with our families again; we will meet again.”

The speech put the Queen — who worked as a mechanic in the Second World War and presided over the country as it regained its footing and enjoyed some of its greatest years of prosperity — front and centre on the world stage again. It earned her plaudits at home and abroad for her astute reading of our collective mood and need for reassurance.

Both princes and the prime minister recovered, but the country has been battered, with total cases approaching a million and more than 45,000 deaths by October. Like Canada, the U.K. is in the grip of a second wave, with case counts in excess of 20,000 a day in October and rising.

For that reason, the Queen has conducted almost all her royal business virtually for seven months and even celebrated her 94th birthday on April 21 in a videoconference call with her family. For her official June birthday celebration, Trooping the Colour, the 1st Battalion Welsh Guards gave her the Royal Salute from the Quadrangle at Windsor Castle.

She stepped outside the walls of the castle and onto its grounds again in July to personally knight Capt. Thomas Moore, the 100-year-old Second World War vet whom Prime Minister Johnson described as “a beacon of light through the fog of coronavirus.”

Sir Tom inspired the country when he pushed his walker around his garden 100 times to raise more than $55 million for the National Health Service. Once again, with one simple act, the Queen shored up our faith that all was right with the world. As Sir Tom said, “The money [raised] is very useful but you’ve only got one Queen, and when you get a message from the Queen, there’s no value that can be placed on that.”

In her first public appearance since March, the unmasked Queen visited the Defence Science and Technology Laboratory near Salisbury with William in mid-October. The next day, the Canadian government unveiled its new official photographic portrait of our steadfast monarch. “The official Canadian portrait of Her Majesty the Queen was updated because the previous portrait is 10 years old,” Canadian heritage spokesperson Amélie Desmarais said. “The last Canadian portrait of the Queen was taken at Rideau Hall in July 2010 and made available in 2012 to mark Her Majesty’s Diamond Jubilee.”

In the new portrait, which appears on our cover, the monarch wears an elegant embroidered white dress with her Canadian insignia, as Sovereign of the Order of Canada and Order of Military Merit, pinned to her left shoulder. Her jewelry set, the stunning King George VI Victorian Suite which dates to 1850, includes the blue sapphire-and-diamond earrings and necklace given to her by her father as a wedding present in 1947. In 1963, the Queen commissioned a tiara and bracelet to match. The Queen wore the sapphire suite in Canada during the 1990 royal tour. With 2021 upon us, it serves to remind us there is comfort in tradition and a sense of continuity with the Queen. It should come as no surprise that Her Majesty is the most popular royal in the U.K., according to an October survey of 1,626 Britons by the international, London-based data research firm YouGov, which asked respondents whether they had a positive or negative opinion of each Royal Family member. While support for Harry dropped to 55 per cent and Meghan was at 38 per cent, the Queen and Prince William had the highest positive rating at 79 per cent, followed by Kate at 69 per cent. (Prince Andrew has just a seven per cent positive rating.)

Even in Canada, a January 2020 Angus Reid Institute survey of 1,154 people showed two-thirds of Canadians have great affection for the Queen, while a previous 2016 poll revealed the most common word Canadians chose to describe her was “respected.”

The world has been in shambles before, and it will be shambolic for a good part of 2021. So when the Queen pledged to spend her life — “whether it be long or short” — in our service almost 74 years ago, we can rest assured she will hold up her end of the bargain.

A version of this article appeared in the Jan/Feb 2021 issue with the headline “Long May She Reign,” p. 38.