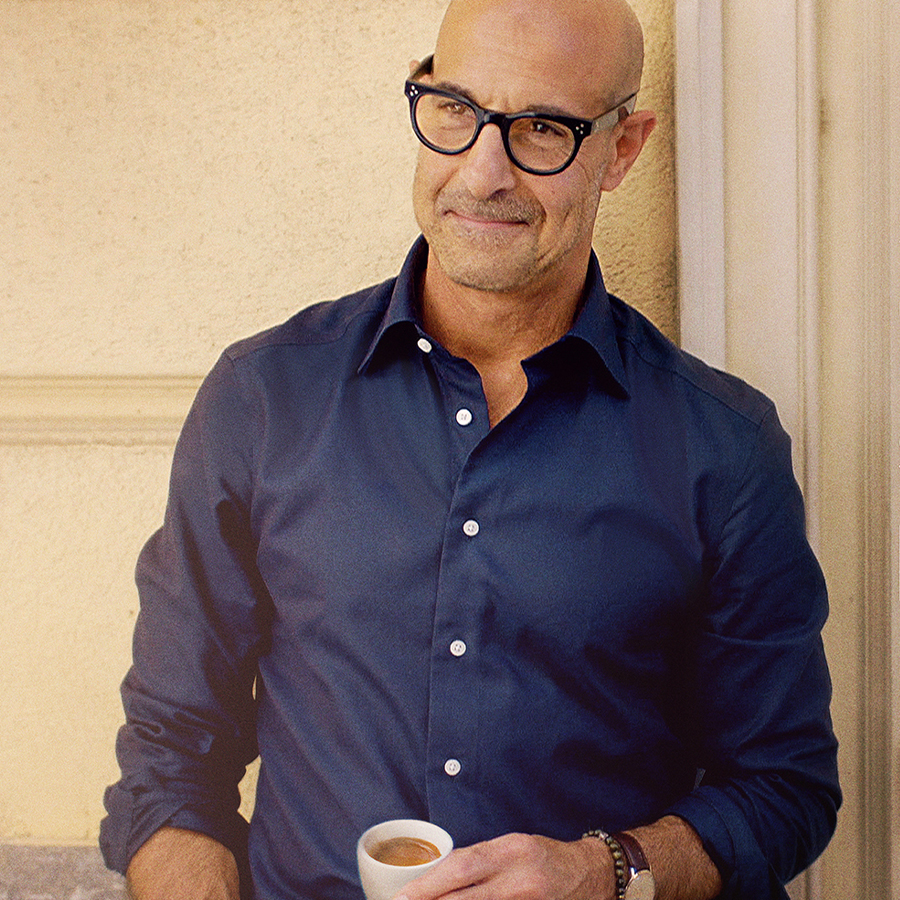 In 'Stanley Tucci: Seaching for Italy,' the famed actor goes back to his familial roots to explore the cuisine of his Italian homeland. Photo: Courtesy of CNN

Stanley Tucci has given us all the best Valentine’s gift: a sensuous, drool-worthy armchair travelogue of Italy through the lens of its kitchens.

The actor, of course, is beloved for his varied selection of film roles, from tough-loving magazine fashion director Nigel Kipling in The Devil Wears Prada (2006) to his Oscar-nominated role as serial killer George Harvey in The Lovely Bones (2009) and Master of Ceremonies Caesar Flickerman in The Hunger Games (2012). And, of course, foodies won’t forget his turn as Paul Child, husband of famed chef, cookbook author and television host Julia Child in Julie and Julia (2009). But it’s the cuisine at the heart of his 1996 directorial debut Big Night — in which Tucci and Tony Shaloub play brothers trying to keep their Italian restaurant afloat in the gourmet wasteland of small-town America in the 1950s — that he is leaning into again now.

Italian-American on both sides, the actor returns to his ancestral homeland in Stanley Tucci: Searching for Italy, which debuts on CNN at 9 p.m. on Sunday, Feb. 14.

A love letter to the food of his heritage, the series was filmed mid-COVID after the star went viral last April for his sexy social media cocktail-mixing videos (an amateur film project by his second wife, Felicity Blunt, the literary agent sister of film actress Emily Blunt). But more on those later.

Today, at 60, the actor is a middle-aged fantasy in this show. He crouches while sampling a San Marzano tomato, holding the juicy fruit just inches from his crisp white linen slim-fit shirt. He makes bald sexy with his heavy framed black glasses, but it is mostly his vocal delivery, smooth as an aperitivo, that seduces: he leans into the food descriptions, selecting adjectives to roll around on his tongue and savour: “the CREAMY nuggets of mozzarella counteract the sweet sharpness of the tomato.”

Filling the late Anthony Bourdain’s shoes as CNN’s travelling food star was clearly going to be a challenge, but Tucci was an inspired choice because the premise of the show delivers. His focus is the 20 regions of the country, seeking out chefs and others who make food in the traditional manner.

Tucci speaks of his grandmother and the Italian way of bringing death into the conversation. The background music is a jazzy backdrop reminiscent of Big Night. And Tucci even reveals himself to be able to eat in an appealing way on camera (way harder to do than you might think). He walks through cobbled streets in the intros to a segment in a manner that links him to Bourdain’s food journeys.

Having a concentrated subject mandate is a real plus in this series: it is satisfying for the foodies we are all becoming in lockdown to get into the nitty-gritty origin story of each of Italy’s 20 distinct regions and their food traditions.

For a North American, the sheer depth of the history of food in Italy is a marvel. To wit: buffalo lived in the mountains above Rome, hence the preponderance of mozzarella di buffala in Italian cuisine. Zucchini raised on the Amalfi coast live their best lives flash-fried in a vat of sunflower oil, then rested in the fridge overnight and zapped with a shot of butter before being folded into pasta. Real pizza is only fired for 45 seconds in a wood-fired oven, and the dough is best made outside to be somehow blessed by the fresh air. Wild rabbits who grow up feasting on the leaves of the chestnut tree are best served with a simple reduction of tomatoes and herbs that allows the chestnut flavour to shine. There is only one — amazing, locally infused — way to cook tripe in each region. People in Naples buy an extra portion of caffè sospeso — a term that means “suspended coffee,” indicating they are paying it forward to someone in the community who might need it. These gems are the tasty reward of watching Tucci — and his crew, as he sometimes pulls back the curtain to show the mobile framework of the show — transverse the country in a mask. His elbow bumps with friends old and new even feel fresh.

Tucci, too, is a celebrated cookbook author, from his first effort, The Tucci Cookbook, in 2012 through a 2014 follow-up, Cooking With Family and Friends, to a new one coming this year, no doubt to tie in to the travel series, called Taste: My Life Through Food, due in the fall. He often refers to himself as a food obsessive, and that is very much on display in the series. Tucci is compelling as he makes a pilgrimage to a farm under a highway overpass, its soil the best place in Italy to birth tomatoes with the right amount of sweetness and acidity to make the pizza burst in your mouth. He is just as grateful to share a deep-fried pocket of cheese and pork fat in a claustrophobic narrow cobbled street. That he is able to make this food and travel porn — remember sharing and exploring? — and have the viewer not resent his privilege out of time and place is a real sleight of hand.

It is the same alchemy Tucci brought to his Instagram cocktail videos, which were originally filmed by his wife to cheer up her colleagues at the book agency. He was hit by a viral wave of interest, becoming everyone’s internet boyfriend for the charming way he made his wife a Negroni.

He got a lot of mail, he told Vanity Fair, from people astonished he was wearing a belt in lockdown. He upped the ante further, encouraging us all to buckle up and shine, wearing a suit to make a Christmas cosmo.

But it is because Tucci is playing himself in the CNN original series that makes the show work. He smoothly links his backstory to the proceedings, speaking in one sentence about his late first wife, who died of breast cancer in 2009. Then he segues to a scene where Felicity joins him at an Amalfi Coast restaurant to learn the secrets of zucchini pasta they had been trying to replicate at home for years.

And the plot also brings some history into the mix: the volcanic soil of the region around Vesuvius infused the region with fertile clay for vegetables; the legacy of miraculous transformations of offal in the Jewish quarter of Rome (because that was the only parts of the animal that were available to the poorest neighbourhoods); and why Neopolitans fry pizza (because of the cholera).

The series was filmed during COVID, and there are scenes with masks and without masks. But Tucci’s golden-throated narrative eases you through that difficult reality and into the food fantasy.

Food, Faith and Family: A Journey to Italy, the Land of Our Grandmothers