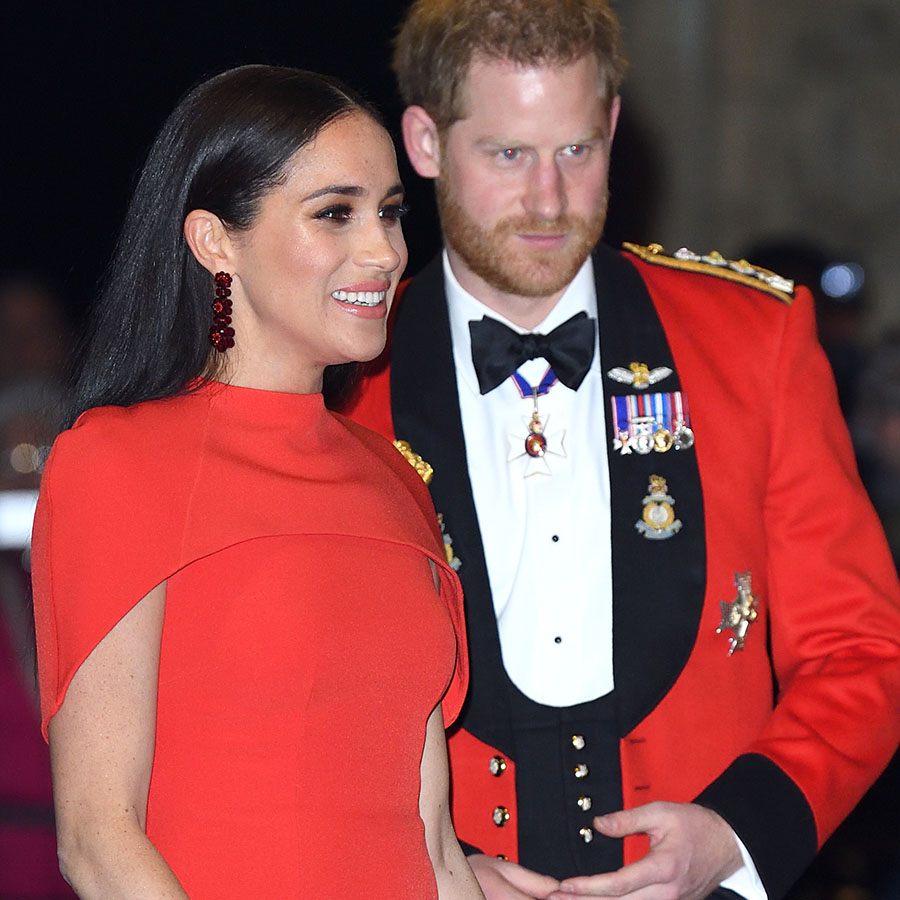 Prince Harry and Meghan Markle, seen here attending the Mountbatten Festival of Music at Royal Albert Hall in 2020, released a statement Friday, alongside one from the Royal Family, in regards to news that they will no longer serve as working royals and will be stripped of multiple duties and patronages. Photo: Karwai Tang / WireImage via Getty Images

This morning the Royal Family released details regarding the future of the Duke and Duchess of Sussex, declaring the couple to be working royals no longer. As agreed upon a year ago, there was to be a review of the arrangements made in those fevered negotiations early in 2020 that laid out the final days of Megxit, just as the pandemic steamrolled over Britain in mid-March.

The official statement from Buckingham Palace reads, “The Duke and Duchess of Sussex have confirmed to Her Majesty that they will not be returning as working members of the Royal Family.” It goes on to strip the now California-based Harry and Meghan of all “honorary military appointments and Royal Patronages,” saying they will be redistributed among other members of the key working players in the family. The brief statement ends saying that “while we are saddened by their decision, the Duke and Duchess remain much loved members of the Royal Family.”

The generally straight-forward public relations style of the Sussexes, meanwhile, was immediately apparent once again. A spokesperson for them shot back with a missive stating: “As evidenced by their work over the past year, the Duke and Duchess of Sussex remain committed to their duty and service to the UK and around the world, and have offered their continued support to the organizations they have represented, regardless of official role.” Then the kicker, a politely defiant shot across the bow: “We can all live a life of service. Service is universal.”

The timing of the statements is pointed, to say the least. First of all, Prince Philip is currently in the hospital for observation after falling ill. The 99-year-old family patriarch is months away from his 100th birthday celebrations, an occasion the now fully-emancipated Duke of Sussex will likely attend. Second, today is Prince Andrew’s birthday. The news shift is further evidence that the House of Windsor is keen to keep the Queen’s third-born firmly blended into the Palace wallpaper.

To that end, never think you can’t read tone into social media. The Royal Family Twitter feed today notes: “On this day in 1960, the Queen was safely delivered of a son, the first child born to a reigning monarch since 1857.” A rather curt message with no warm happy birthday message in the sentiments.

The statement stripping the Sussexes of their last patronages was slipped into the feed, wedged between the decidedly impersonal birthday salutations for Andrew and a cheery note about the Prince of Wales Nature Challenge. The upshot: the Royal Family will quite firmly turn its cheek to those who cross it – even bosom family members in the single digits of the line of succession.

Stripped of Duties and Patronages

The stripping of the honorary military commands is expected to be a blow to Harry, who himself served a decade in the British army, including two tours of Afghanistan. One particularly meaningful title, wrote BBC Royal Correspondent Jonny Dymond, was Captain General of the Royal Marines. When his grandfather, Prince Philip, passed the honour on to Harry, he told him, “Don’t cock it up,” according to Dymond.

Harry’s other military honours now gone include: Honorary Air Commandant of RAF Honiton and Commodore-in-Chief, Royal Navy Small Ships and Diving. He also loses his rugby patronages. Both Sussexes lose their posts at the Queen’s Commonwealth Trust; Harry was president and Meghan was VP. For her part, Meghan loses patronages at the Royal National Theatre and Commonwealth Universities. Both will keep their private patronages, including WellChild and Invictus for Harry and SmartWorks for Meghan. Following the announcement, a number of the organizations affected tweeted statements.

The British press, meanwhile, is in full response mode, flush with analysis of the announcements. The mood is trending toward a sense of this being the final step to enforce the Queen’s position that one cannot be “half in and half out.”

The announcement today also follows an onslaught of news from the Sussexes this week — including their pregnancy reveal (accompanied by an arty soft-focus photo of Harry and Meghan cradling the new baby bump under a tree of life in SoCal) and Meghan’s victory against a tabloid for publishing her letter to her father in the dramatic days around her wedding.

As well, we also learned that the duchess will sit down with Oprah for an American network special due March 7 — Harry is also set to make an appearance — which could serve as yet another public airing of laundry and feelings.

It is hard, then, not to see all this as a bit, well, calculated, as if the army of Hollywood spin doctors weren’t trying to drive interest in the Oprah special.

But the really sad thing is that the way this situation was handled hints at residual bitterness on both sides: after all, if this year of “cooling down” had in fact led to a cooling down, then there would be no need for more duelling press releases. And there would be no defensiveness on the part of the Sussexes.

That’s how families are, though — rich or poor, famous or not. Sometimes the wounds take longer to heal. This conclusion to the painful extrication of Harry and Meghan from royal duties will hopefully serve as a clearing of the field to move forward as relatives now outside of the family business.

The couple, of course, had already been making steady waves since they left Britain last March, returning briefly to Vancouver Island before landing in Santa Barbara as neighbours to Oprah, nabbing massive Netflix and Spotify deals to support their new Hollywood life.

Prince Philip, the Duke of Edinburgh, Taken to London Hospital After Feeling Unwell