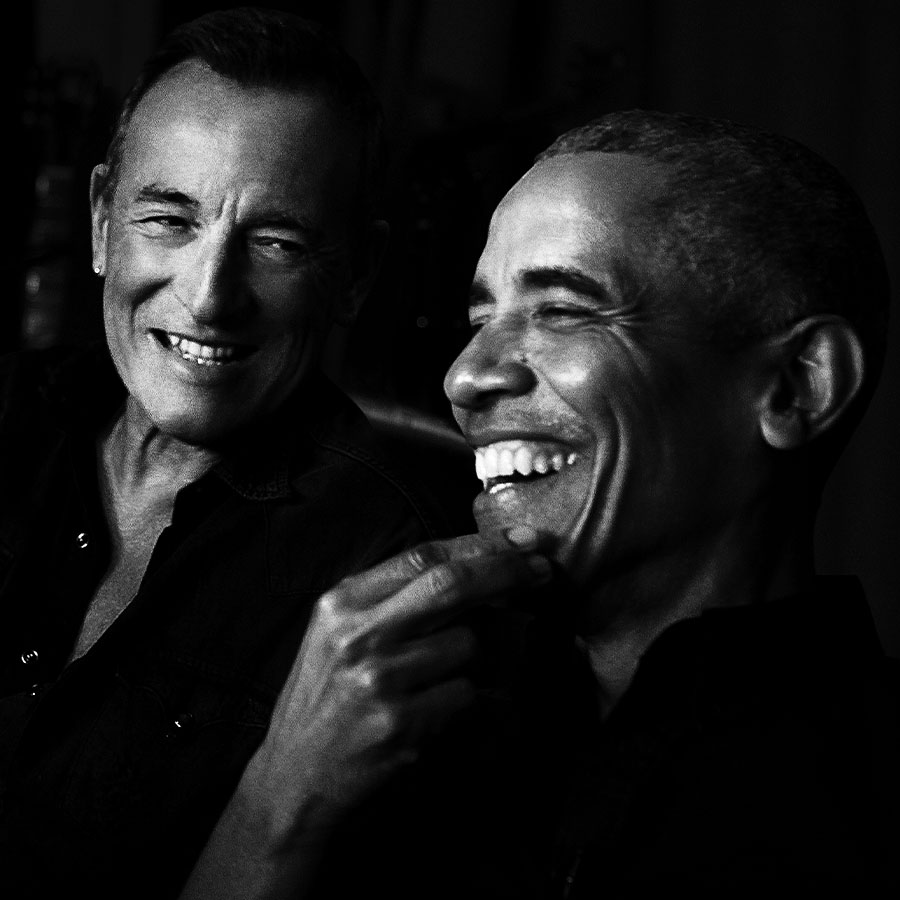 Bruce Springsteen and Barack Obama discuss “race, fatherhood, marriage, and the state of America” in their new podcast, 'Renegades,' announced during a Spotify event on Monday. Photo: Courtesy of Spotify

The Boss and the former boss of the free world are teaming up for a new podcast. On Monday, Spotify announced the debut of Renegades: Born in the USA, an eight-part podcast featuring legendary rocker Bruce Springsteen and former U.S. President Barack Obama. Recorded in the 71-year-old rocker’s converted farmhouse, the series sees the duo discussing “race, fatherhood, marriage, and the state of America.”

“On the surface, Bruce and I don’t have a lot in common. He’s a white guy, from a small town in Jersey. I’m a Black guy of mixed race, born in Hawaii. He’s a rock ‘n’ roll icon. And I’m not as cool,” Obama, 59, says in the trailer for the podcast, which you can watch below.

He adds that, “In a lot of ways, Bruce and I have been on parallel journey’s, looking for a way to connect our own individual searches for meaning, truth and community with the larger story of America. And over the course of a few days, all just a few miles from where he grew up, we talked.”

The first two episodes of the podcast — “Outsiders: An Unlikely Friendship” and “American Skin: Race in the United States” — are available for download now, and stems from the production deal that the Spotify streaming music service  signed with Barack and Former First Lady Michelle Obama’s Higher Ground Productions in 2019. The Michelle Obama Podcast launched in 2020.

In the first two episodes of Renegades, Obama and Springsteen — who met when the rocker played an Obama presidential campaign event and remained friends — discuss topics including racism, identity and their shared sense of growing up as outsiders. They also share memories of their grandparents.

“My grandparents were old school Irish people,” Springsteen notes in the first episode. “I was brought up from the Irish side of my family, and they were just as eccentric as — as you would— as— as American Irish could be, you know. And started me off when I was a very young child on simply being different from everybody else. I had an emotional displacement.”

Obama, meanwhile, recalled going to the beach with his grandfather as a child in Hawaii, and his memories of the elder’s “little bottle of Primo Beer that had King Kamehameha’s picture on the front of it.”

He also recalled that, “the tourists would come up and they’d see me, and they’d … say, ‘Is he Hawaiian?’ And my grandfather would say, ‘Yeah, he’s the grandson of King Kamehameha.’”

Spotify announced Renegades as one of a number of new podcasts at their Stream On event on Monday.

In addition to Renegades, the Obamas’ Higher Ground company also announced another podcast with Spotify today, called Tell Them I Am, described by the streaming service as “a compelling collection of narratives from Muslim voices. With a new episode premiering every weekday this Ramadan, host Misha Euceph opens a window into the lives of 22 guests from all over the world.”

As well, Prince Harry and Meghan Markle dropped a teaser trailer for their new Archewell podcast at the Spotify event, their first “appearance” since their Valentine’s Day pregnancy announcement and stripping of royal duties and patronages a few days later.

“We created Archewell Audio to make sure that we can elevate voices that maybe aren’t being heard, and hear other people’s stories,” the Duchess of Sussex said in the trailer below.