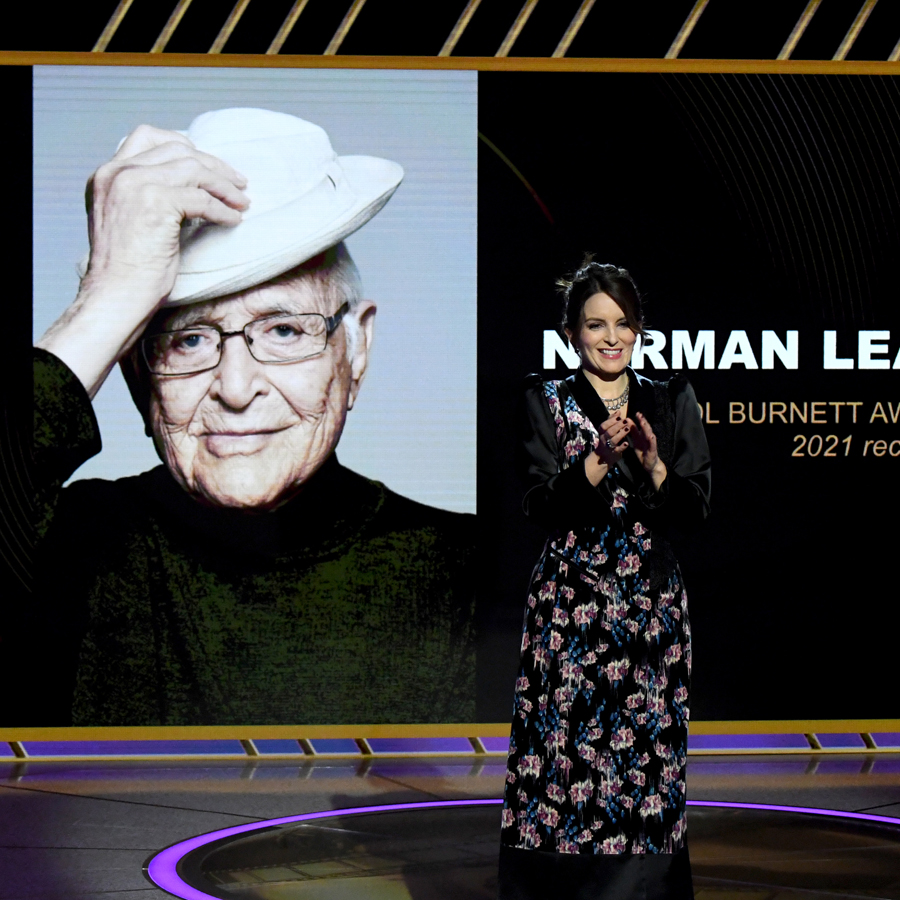 The 2021 pandemic award season kicked off Sunday night with the 78th Golden Globes, which offered a sense of familiarity amidst an unfamiliar broadcast.

The familiar: the duo of Tina Fey, 50, and Amy Poehler, 49, returning for their fourth Golden Globes hosting gig together (and first since 2015), helming the broadcast from New York and Beverly Hills respectively. And that’s not to mention the legends of screens big and small who were celebrated, from Jane Fonda to Norman Lear to Chadwick Boseman, Jodie Foster and, of course, Canada’s own Catherine O’Hara.

Then there’s the unfamiliar: the dual hosting locales and ballrooms sparsely populated by frontline and essential workers rather than celebs getting drunk and acting ridiculous on what is traditionally one of the most fun award shows of the year. That said, the celebs for the most part (except for presenters and Jane Fonda) stayed home, appearing via video chats while yielding the prime ballroom seats to those everyday heroes who, more than anyone, deserve a celebration after the last year.

Of course, the hosts and frontline workers had to share the ballroom space with the huge elephant in the room: the ongoing scandal surrounding the Hollywood Foreign Press Association, which votes on the nominees and the winners, and the fact that it includes no members of colour.

Add to that the fact that a number of celebrated films and television shows with Black casts — from HBO’s I May Destroy You to Spike Lee’s Da 5 Bloods, Ma Rainey’s Black Bottom and One Night in Miami — were either snubbed in major acting categories this year or, in the case of I May Destroy You and Da 5 Bloods, received zero nominations. Lee, whose two children served as Golden Globe ambassadors, was quoted as saying that, “I hope the HFPA understands in order to stay relevant, they must diversify their membership … Put some sistas and brothers up on that wall. Y’all buggin’ out!” As well, Time’s Up called out the Golden Globes ahead of the broadcast.

Of course, the scandal was made worse when it came out that the Netflix series Emily In Paris, which features a largely white cast, not only received multiple nominations, but reportedly “wined and dined” a number of HFPA voters in Paris. One of the show’s writers even penned an editorial for The Guardian noting that I May Destroy You, a British-American drama about the aftermath of a rape created, written by and starring Michaela Coel along with a largely Black cast, deserved nominations.

In light of that, the show delivered a number of entertaining, historic and even tear-jerking moments while sort-of addressing the governing body’s lack of diversity.

Viewers tuning in hoping for a skewering of the HFPA for their lack of diversity by the hosts were likely disappointed. Fey and Poehler cracked a few jokes at the HFPA’s expense — including a quip about how the group didn’t know about the discussion around diversity because their office is at the back of a French McDonald’s — but remained pretty tame and certainly nowhere near the Ricky Gervais-level of takedowns some had hoped for.

Throughout the night, various celebrities made calls for more inclusion and diversity — including Jane Fonda in an impassioned speech (more on that in a bit) — while Ali Sar, president of the HFPA, appeared alongside VP Helen Hoehne and past president Meher Tatna appeared and made vague pledges to improve diversity in the HFPA without offering specifics on how they plan to go about it.

Norman Lear, 98, and Jane Fonda, 83, were honoured for their contributions to television and film respectively.

Lear, the legendary television producer — who is still working — was lauded in a video package that featured clips from some of his most famous shows, including All in the Family, The Jeffersons and Maude.

“His comedy woke America before woke was a thing, tackling subjects that were never seen on television,” actress Wanda Sykes said in the video package. “At 98 years, he’s still making television and still making trouble.”

In accepting the Carol Burnett Award via video chat, Lear recounted his career, thanked the many people who’ve helped him over the years and mused on the longevity-boosting power of laughter.

“I am convinced that laughter adds time to one’s life, and no one has made me laugh harder, and there’s no one I owe more time to, than Carol Burnett,” he said. He later added that, “At close to 99, I can tell you that I have never lived alone. I have never laughed alone and that has as much to do with my being here today as anything else I know.”

Jane Fonda, meanwhile, appeared in person to accept her Cecil B. DeMille Award. In a video package recounting her career as an actress and activist, fellow actress Kerry Washington noted that, “There is a lot of glass on the floor from all of the ceilings she has shattered. Jane’s is a career for the ages.”

Fonda herself spoke about the power of telling stories, and how “they really can change people.” She went on to recount the various films and TV shows she’s watched in the last year that enlightened her on topics ranging from race to immigration to sexual abuse.

“Stories can change people, but there’s a story we have been afraid to see and hear about ourselves and this industry. The story about which voices we respect and elevate, and which we tune out,” she added, referring to diversity in the HFPA and the entertainment industry in general. “Let’s all of us make an effort to expand that tent so that everyone rises and everyone’s story has a chance to be seen and heard.”

She added that, “I have seen a lot of diversity in my long life and at times I have been challenged to understand some of the people I’ve met. But inevitably, if my heart is open and I look beneath the surface, I feel kinship.”

Schitt’s Creek, the little Canadian show that could, continued its incredible awards streak by picking up two wins, officially making it the most honoured Canuck show in the history of the Golden Globes.

The first win went to Catherine O’Hara, who nabbed her first ever Golden Globe at age 66 for Best Performance by an Actress in a Television Series — Musical or Comedy. She thanked Eugene and Dan Levy and CBC for making the show in Canada, adding, “They let me wear 100 wigs and speak like an alien.” She concluded her speech by having her husband, production designer Bo Welch, play her off with music from his phone.

The second award, Best Television Series — Musical or Comedy, went to the series as a whole, with Dan Levy congratulating the cast and crew. He also called the win “a lovely vote of confidence” in the show’s ideals, including inclusivity, and said he hopes that next year the Golden Globes will reflect that too.

When discussing inclusion and diversity, there are few categories where the balance of nominees leans more in favour of white men than the Best Director category. In fact, only one woman had ever won the award in 77 years — Barbra Streisand, for Yentl in 1983. This year, Nomadland director Chloé Zhao, 38, made double history as the first Asian woman — and only second woman overall — to take home the award. In addition, this year was the first year where the female nominees in the category outnumbered the men 3-2. The win also solidified  Zhao as an Oscar favourite, while Nomadland, which is already a top Oscar contender, won the award for Best Motion Picture — Drama.

In her acceptance speech, Zhao thanked the nomads who took part in the making of the film and included a quote from one of them: “compassion is the breakdown of all barriers between us. A heart-to-heart bonding. Your pain is my pain. It’s mingled and shared between us.”

She added, “Now this is why I fell in love with making movies and telling stories. Because it gives us a chance to laugh and cry together … to learn from each other and have more compassion for each other.”

The late Black Panther actor Chadwick Boseman, who died last August at age 43, won the award for Best Performance by an Actor in a Motion Picture — Drama for  Ma Rainey’s Black Bottom. The film was released posthumously and his wife, Taylor Simone Ledward, accepted on his behalf with a tearful speech paying tribute to her husband.

“To Diana, you have taught me compassion and empathy beyond any measure that I could ever imagine,” an elated Corrin said in her acceptance speech after winning Best Performance by an Actress in a Television Series — Drama.

O’Connor, meanwhile, charmed social media with his speech following his win for Best Performance by an Actor in a Television Series — Drama. He called out Corrin as “a brilliant player of ‘Rock, Paper, Scissors.’ I love you to bits” and asked viewers to keep the mental health of others top of mind as people live alone and isolated during the pandemic.

Neither Corrin nor O’Connor will be returning to the series, as their roles will be taken over by a new pair of actors next season. Gillian Anderson, 52, who played Prime Minister Margaret Thatcher, also won’t be returning next season, but she left with the win for Best Performance by an Actress in a Television Supporting Role. And The Crown itself won the award for Best TV Show — Drama.

In a show called out for its lack of diversity, the final acting award of the evening, Best Actress in a Motion Picture – Drama, included a showdown between two women who played Black musical icons in two different films this year.

Viola Davis, 55, played pioneering blues singer Ma Rainey in Ma Rainey’s Black Bottom, while Andra Day, 36, portrayed the “First Lady of the Blues,” Billie Holiday, in The United States vs. Billie Holiday. And up against Davis — who is the first and only African-American to win the “Triple Crown of Acting” (Oscar, Emmy and Tony Award) — not to mention Frances McDormand (Nomadland), Vanessa Kirby (Pieces of a Woman) and Carey Mulligan (Promising Young Woman), Day pulled out a huge win.

The actress, who clearly didn’t expect the nod, noted, “I can’t believe it, I’m in the presence of giants” in reference to her fellow nominees. She added that Billie Holiday, “transformed me with this role and her presence and her spirit.”

And speaking of people who didn’t expect to win, Jodie Foster, 58, seemed genuinely stunned as she took home the award for Best Performance by an Actress in a Supporting Role in any Motion Picture, for The Mauritanian. Cuddled up on her couch in her pyjamas with her wife Alexandra and their dog, Foster reacted to the win by exclaiming, “I’m a little speechless. I just never expected to be here again.”

Of course, a largely virtual award show incorporating numerous video chats from all across the country was bound to suffer from its share of glitches. From acceptance speeches without sound to voices that didn’t line up with the mouths they were coming out of, it wasn’t the most technically smooth award show. That said, given the extraordinary circumstances, it turned out alright in the end.

Olivia Colman On The Crown, Acting Opposite Anthony Hopkins in The Father and Finding Fame in Her Mid-40s