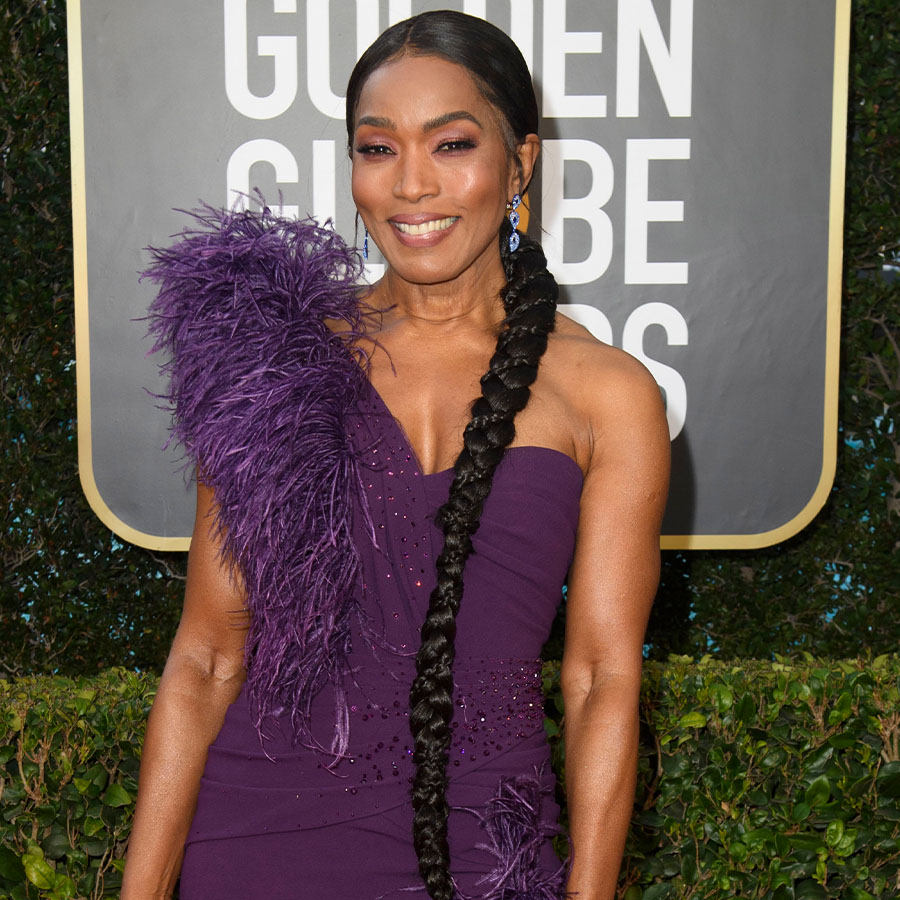 Angela Bassett arriving for the 78th annual Golden Globe Awards in a purple, feather-trimmed Dolce & Gabbana dress that proved one of the best looks of the evening. Photo: CPimages via European Pressphoto Agency

The star-studded event that kicks off the annual awards season looked very different in the wake of a year-long pandemic, but celebrities soldiered on for the 78th annual Golden Globes (see our full award coverage here).

Decked out in co-ordinating leggy tux looks, returning hosts Tina Fey, 50, and Amy Poehler, 49, MC’d the bi-coastal, semi-virtual affair from New York’s Rainbow Room and Hollywood’s Beverly Hilton Hotel respectively, while a handful of stars put in a physical appearance as presenters and most nominees accepted their awards via video from home.

Haute couture to super casual, looks ranged from red carpet ready to COVID-era “Couldn’t Be Bothered.” The gents comprising much of the nonchalant group, a rumpled Jason Sudeikis, 45, accepted his Best Actor (TV) award for Ted Lasso in a tie-dyed hoodie designed by his sister (that quickly sold out); a flannel clad Jeff Daniels, 66, up for Best Actor (TV) for The Comey Rule, zoomed in from his non-descript basement; and On the Rocks Best Supporting Actor nominee, Bill Murray, 70, went viral in a Hawaiian shirt while toasting everyone with a martini from his backyard.

Chloe Zhao, 39, the first Asian woman to win the ceremony’s Best Director prize (and only second woman overall) for her film Nomadland, which also took Best Picture, received the history making honour on Zoom in braids and a t-shirt.

Perhaps channelling the role she was nommed for — Best Supporting Actress in Hillbilly Elegy — Glenn Close, 73, appeared from Montana in a plaid shirt, her dog by her side. And Canuck actress Sandra Oh, 49, went for a contrast effect, introducing Palm Springs for the Best Motion Picture award while standing in a snowbank wrapped in a classic Canadian puffer jacket.

None of which halted the cavalcade of designer frocks and glittering jewels from those holding up the glam side, a few notable trends being Bridgerton braids (Laverne Cox, Angela Bassett), punky touches (Laura Dern’s spikey stilettos, Rosamund Pike’s combat boots) and silver platforms, which added high shine to the bright green ensembles of Dan Levy and Cynthia Eriva.

Here, we look at our favourite, and least favourite, looks of the evening. Taking home the Cecil B. DeMille Award, Fonda, 83, kept her ‘no new clothes’ vow in an elegant Richard Tyler evening suit she pulled out of her closet and accessorized with Sarah Flint pumps and Pomellato earrings. Just as she draped herself in an Elie Saab gown for the 2019 Oscars that she’d already worn to the 2014 Cannes Film Festival.

Fresh off Schitt’s Creek’s historic 2020 Emmys sweep, the Canadian comedienne, 66, took Best Actress in a Comedy or Musical for her performance as the iconic Moira Rose wearing black nail polish, Cartier diamonds, and a bespoke Vera Wang suit in a suitably bold rose print from the designer’s spring/summer 2021 collection. The seven-time nominee, 51, who won her fourth Golden Globe in 2020 for her star turn in the Judy Garland biopic, Judy, returned as a presenter this year in black strapless Giorgio Armani Privé gown. Nominated for Best Actress in a TV Drama for Ratched, Paulson, 46, wore a black, off-the-shoulder, sequin embellished gown with slicked-back hair. A head-to-toe Prada ensemble right down to the custom cast. With a skull emblazoned on the halter neck bodice of her edgy metallic Dior gown, Anderson, 52, won Best Supporting Actress (TV, Drama) for her performance as Margaret Thatcher in The Crown. Striking a stylish but cozy balance between “I couldn’t even brush my hair” (Sudeikis) and Hollywood Wow (a glittering Regina King), Jodie Foster, 58, accepted her Best Supporting Actress prize for The Mauritanian — her first Golden Globe in nearly three decades — alongside her photographer wife Alexandra Hedison, 51. The made-up duo lounging in glam jams at home with their dog Ziggy — dapper in a necktie that matched Foster’s silk Prada pjs. The Promising Young Woman co-star, 48, wasn’t nominated for an award, but you’d never know it from her glam sequin and beaded embroidered Thai Nguyen dress, Dena Kemp jewelry, and elaborately braided Bridgerton do. The Mexican actress, 54, served up her signature Hollywood glam—not hard to do when her husband, François-Henri Pinault, is a fashion magnate — in a one-shoulder cherry red Alexander McQueen gown accented with Harry Winston jewels. Pairing it with a bra top, a choker, and spikey studded heels, Dern, 54, put her own spin on a classic Givenchy tuxedo One of three women shattering the glass ceiling in the Best Director category (the first time more than one woman has been nominated for the award), King, 50, celebrated her directorial debut (One Night in Miami) in a sequin Vuitton dress that reportedly took 350 hours to make. Curve-hugging couture she frosted with $2 million in Forevermark diamonds. The Welsh actress, 51, did the classic Hollywood glam from which she never strays. This year’s choice, an off-shoulder Dolce & Gabanna with Chopard jewelry. Nominated for Best Actress in a Motion Picture for French Exit — the film based on Canadian author Patrick deWitt’s witty novel — Pfeiffer, 62, tuned in from her hotel suite in sequin bodysuit and khaki wide-leg trousers, both Valentino, finished with jewelry by her sister-in-law Rona Pfeiffer. The Aussie actress, 53, wore a halter-neck Louis Vuitton gown embellished with a metallic braid pattern, custom-made by Nicolas Ghesquière for her 15th Golden Globes nomination— this time for Best Actress in a television drama for the HBO hit, The Undoing. The first Black actress to win an Oscar, an Emmy, and a Tony, Davis, 55, used her Best Actress in a Motion Picture nomination (Ma Rainey’s Black Bottom) as a platform to showcase Claude Kameni, an emerging Cameroon-born, LA-based designer, known for his use of vibrant African wax prints.

Kristen Wig’s writing partner and co-star (Barb and Star Go to Vista del Mar), Mumolo, 47, took the time to show up for the L.A. ceremony—but not the time to dress up for it, looking more like she was meeting friends for drinks than walking a red carpet. The award no woman wants to win — Worst Dressed — has to go to Howard, 39. While admirably on the sustainability train with a Temperley London dress she scored off resale site The RealReal, the Best Director presenter’s unbecoming ombré sequin sheath was immediately roasted on Twitter. Presenting the Best Supporting Actress in a Motion Picture award to “best friend” Jodie Foster for her role in The Mauritanian, Curtis, 62, wore Cathy Waterman jewels and an Alex Perry gown. Banana is a hard colour to pull off, never mind when the frock is high shine, bowed at the back, and features Joan Crawford shoulders and balloon sleeves. Double gong here for Best Actress in a Motion Picture winner, Pike, 42, (I Care a Lot) and Bridgerton star Nicola Coughlan, 34, both in overwhelming tulle dresses by Molly Goddard. Pairing her ankle length confection with Alexander McQueen Wander Boots, Pike went for a punk princess effect that was slightly more successful than the lemon meringue with cardigan look that swallowed Coughlan alive.