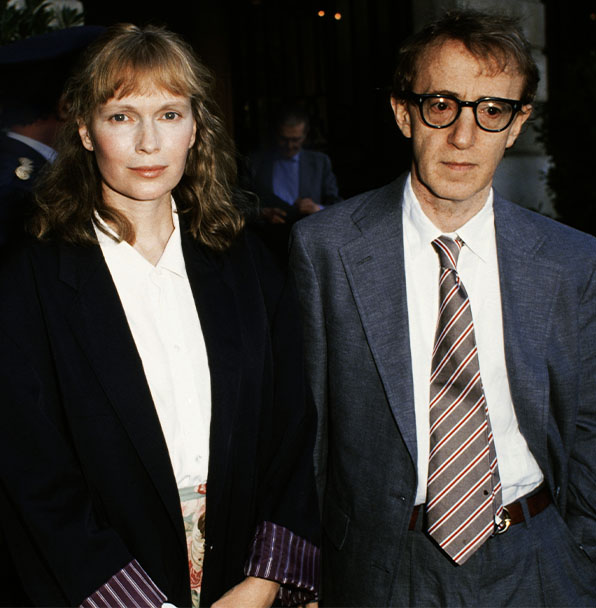 The sexual abuse accusations against Woody Allen, seen above with ex-partner Mia Farrow in 1989, have come to the fore once again in the new HBO documentary series 'Allen v. Farrow.' Photo: Arnal/Gamma-Rapho/Getty Images

The new HBO documentary Allen v. Farrow is, in a single word harrowing. It is painful (yet compelling) to watch, and it stays with you uncomfortably, long after the credits roll. Two of the four hour-long episodes have aired to date (on Crave in Canada), bringing back to the front burner the allegations that Woody Allen sexually abused his then-7-year-old daughter, Dylan Farrow. The ensuing scandal first erupted in 1992 just months after Farrow discovered hardcore pornographic Polaroids taken by Allen of her then-first-year college student daughter Soon-Yi Previn. Allen went on to marry Previn; they now have two children.

His career survived that scandal, but Dylan Farrow, now 35 and a writer, came forward with the sexual abuse allegations in her own voice in a New York Times op-ed 2014. She spoke up again about the complicity of the movie industry in protecting Allen at the height of the Me Too movement in 2017. That was the moment many of the stars of Allen’s films began denouncing the auteur; he has since been, effectively “cancelled” (to use the pop culture vernacular) by many, though he still released two films in the last two years.

But the Farrow family, including Dylan, still have much more to say.

This documentary series brings the sprawling blended family’s truckload of painful dirty laundry back into the conversation. What it really shows is how frustrated Mia and most of her children (only son Moses, who was adopted by Allen along with Dylan in an unusual exception after Farrow adopted them solo, stands with Allen and Soon-Yi) have been, for twenty years, with the narrative as it stood.

The Allen and Farrow households were bustling, unconventional and complicated. Farrow had 7 children (three born in her union with composer Andre Previn, three adopted by the couple and one adopted by Farrow solo). When Allen met Farrow — who had risen to fame as a high schooler herself in Peyton Place then went on to film stardom in Rosemary’s Baby and a first marriage to legendary crooner Frank Sinatra — the prolific director was fresh off his successes with Annie Hall and Manhattan. The two celebrities, a golden New York couple, began dating. They lived separately, famously across Central Park from each other, saying goodnight by flicking the lights of their apartments on and off at each other.

The relationship deepened, and Farrow became his muse, appearing in 13 of his films, which he released like clockwork each year. They came to an agreement that Farrow would adopt a child and bear all responsibilities and he would be free to participate or not as he wished. Ominously, Farrow points out in the doc that he said, eerily “I might be more kindly disposed with a little blonde girl.” She adds, “I should try to find a little girl like that and maybe he’ll love her.”

In “Little Dylan’s” Own Words

The documentary, by the Oscar-nominated team Kirby Dick and Amy Ziering, is a deep dive, with a big surprise at the end of the second episode: never-before-seen footage Farrow recorded of Dylan in the days after the alleged violation of the little girl describing what Allen did to her.

Again: it is harrowing. And it feels intensely credible (my personal opinion). A nanny reported finding Allen with his head in Dylan’s lap. Soon after, another nanny goes searching for Dylan, as the household rules were that Allen not be alone with her due to his “inappropriately intense” fixation with the girl. Farrow comes home from shopping to find Dylan with no underwear and she tells her mother that Allen had taken her to the attic for “father-daughter time.”

In the contemporaneous home movie — which Farrow says she made because the child’s therapist was away for the summer — Dylan says Allen put her on her stomach and told her to lie still. Her voice rises when she says “he went behind me and touched my privates,” her voice breaking at the word privates. Allen, she says, promises to take her to Paris if she complies. It was Dylan’s decision to allow the documentary-makers to show the footage. She released a tweet on Monday after the episode aired, saying “it had long been stored away in a closet” and that she had “resisted watching it herself until now, in an effort to protect what she calls “Little Dylan.”

She says releasing them is part of what she hopes will make her whole again, and to find peace and closure. She adds that when the abuse was inadvertently made public back in 1992, she separated Little Dylan from her consciousness to protect herself as she and her mother and family suffered what she calls “an endless barrage of vitriolic slander and baseless rebuke.”

There are disclaimers that run at the end of each episode, saying Allen denies the charges. He and his camp have long maintained that Farrow coached Dylan to talk about the abuse as a way to pay him back for falling in love with Soon-Yi.

Allen has hung his defense on a report from the Child Sexual Abuse Clinic at Yale-New Haven Hospital, which reached the conclusion that Dylan either fantasized the abuse or was coached by Mia. The judge in the custody trial did, however, label Allen’s actions “grossly inappropriate.”

Yes, it is pretty one-sided. Allen refused to co-operate with the filmmakers, releasing a statement last week dismissing the work as fiction.

“These documentarians had no interest in the truth,” it says. “Instead, they spent years surreptitiously collaborating with the Farrows and their enablers to put together a hatchet job riddled with falsehoods. Woody and Soon-Yi were approached less than two months ago and given only a matter of days ‘to respond.’ Of course, they declined to do so.”

The statement adds that, “It is sadly unsurprising that the network to air this is HBO — which has a standing production deal and business relationship with Ronan Farrow.” Ronan Farrow is Woody Allen and Mia Farrow’s biological son, who has long defended Dylan Farrow’s account of abuse at the hands of Allen. He also won a 2018 Pulitzer Prize for his investigative reporting, in The New Yorker, on the Harvey Weinstein sexual abuse scandal.

Absent an interview from Allen, the documentary includes Allen’s own words — and voice — from the audiobook his widely panned autobiography from 2020 Apropos of Nothing against him. His unrepentant tactic just doesn’t play as well in 2021 as it did in 1992.

The documentary also shows Dylan talking about how much she had loved her father and their special bond over comic books, and at the same time gives evidence from an array of eyewitnesses that show how the previously sunny child came to withdraw and fear being alone with Allen.

In addition, it documents how he was obsessed with the young girl, and in turn rejected his son, Ronan, then named Satchel. Allen would send a private plane to pick up Dylan’s teddy bear left in a European country; he had his costume department stay up all night to make her Dorothy slippers when she expressed an interest in them. He slept in bed wrapped around the little girl, both of them in their underwear at Farrow’s Connecticut country house, and followed her around to the point of distraction.

Allen never lived with the Farrow brood, but up until the breach, he would come to the household in the morning for breakfast and be there to tuck the younger children in at night. Disturbingly, the home movies in the documentary show him interacting with Soon-Yi, who was very much a part of the brood (he has always maintained he felt she was not “his” daughter).

Among the other revelations thus far, beyond the bombshell of the Dylan tapes: film critics dissect how the oeuvre of Allen’s movies could show he was literally grooming all of us to get us to accept the idea of a teenager with an older man — most especially in Manhattan, when Woody’s 42-year-old character dates the 17-year-old character played by Mariel Hemmingway. Once you see how he got the young girl to be the aggressor in the relationship, you really can’t unsee it.

The other big mic drop are allegations that Allen was sleeping with Previn when she was underage. Allen’s housekeeper says she found used condoms and soiled sheets after Soon-Yi would visit him when she was still in high school, regular solo visits corroborated by Allen’s doorman. Just: ew.

The documentary also details how Farrow lost her sense of self in her dependent professional relationship with Woody, as he made her feel she was too old to get work with other directors.

There is zero doubt that there will be more shoes yet to drop as Allen v. Farrow winds towards its endgame. This is a family with a trove of home movies, paparazzi footage and big screen imagery to fill the screen.

This is also not a docu-series to binge: the content is handled with care but it is deeply disturbing. The Farrow family waited decades to tell this tale, until Dylan herself was ready to open the old wounds.

I’m glad the documentary makers and the network decided to give the stories room to breathe, and room for us to take it all in.

The final two episodes of Allen v. Farrow air over the next two Sundays on Crave in Canada.