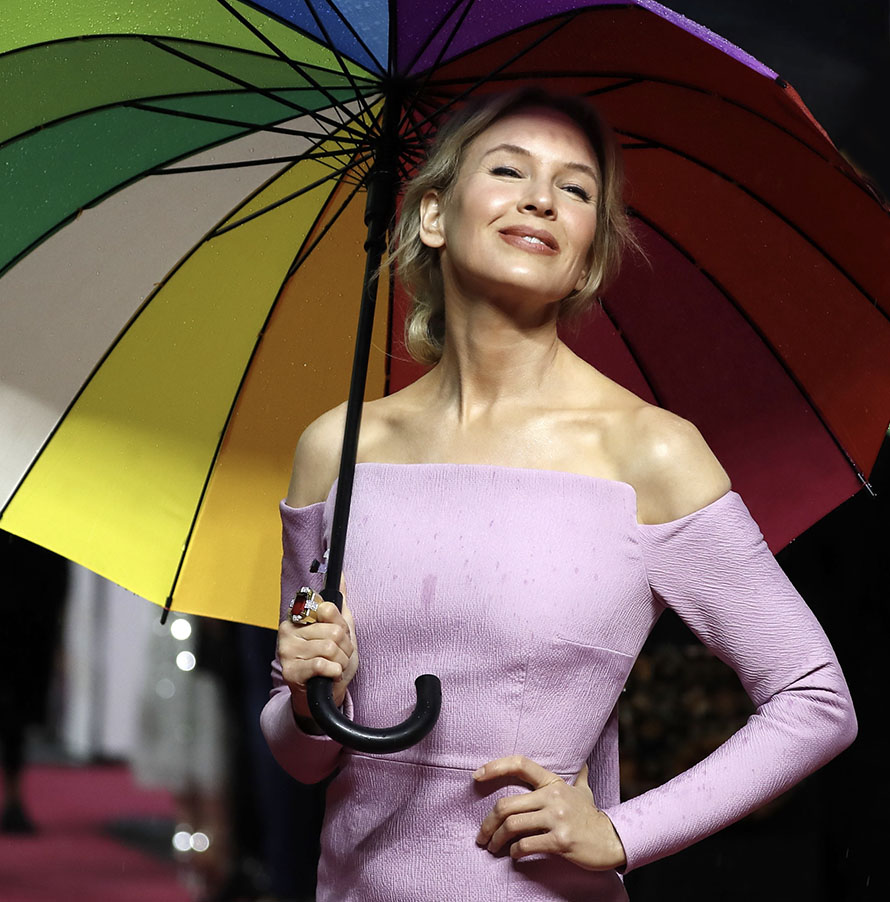 Renée Zellweger, who played Judy Garland in the biopic 'Judy,' poses on the red carpet in London upon arrival for the 2019 European premiere of the film. Photo: Tolga Akmen/AFP via Getty Images

After winning an Academy Award for best actress for her performance in Judy (2019), Renée Zellweger is up for a Grammy for the Judy soundtrack in the category of best traditional pop vocal album. The film follows the career of Judy Garland, a beloved and well-known queer icon of the 20th century.

The film depicts Garland’s importance to gay fans in scenes featuring fictional gay couple Stan (Daniel Cerqueira) and Dan (Andy Nyman), who befriend the star at a time when she feels abandoned by everyone else in her life. These scenes allude to the deep and complex history of queer audiences that have grown around divas like Judy Garland.

As explored by cultural commentator Louis Staples, there are many reasons why Garland came to be considered a gay icon. The connection of queer audiences to divas is a significant one. The film’s exploration of one face of this is well-done, yet limited.

While the film highlights fun and joy between Stan, Dan and Garland when she visits them after a show, Judy largely depicts the connection between the tragedy, struggles and outsider status of a diva like Garland and the similar hardships historically faced by queer people.

But fans of divas like Garland formed complex social networks and communities around their fandom. Such communities were also built on joy, subversion and celebration as much as they were on suffering and pain. Also, commentary about Garland’s appeal to queer audiences often foreground white divas and white fans: Music scholar Steve Swayne points out that many of the communities represented in major studies are mostly white, and aren’t universally representative of 2SLGBTQIA+ experiences or interests.

As film scholar Richard Dyer argues, Garland’s story is one of survival in a hostile world: such an experience likely connected with the lives of many gay men struggling for survival and some form of control.

In Judy, Garland learns about the couple’s struggles with the law: it was not until 1967, two years before Garland’s 1969 death, that same-sex acts were partially legalized between men over the age of 21 in the United Kingdom.

The couple’s connection with Judy is primarily based around their mutual pasts of trauma and being outcasts: viewers see Garland depicted as a teen yearning to be loved, but harshly driven by both her mother and the domineering executive of MGM studios.

While Judy shows there are moments of celebration and joy in Garland’s, Stan and Dan’s connection, Dan and Stan’s night out with Judy ends with Dan weeping while Judy consoles him.

Journalist Edith Elenes and director D.W. Waterson, along with many other queer critics, have discussed at length how queer stories represented in mainstream culture too often focus primarily on trauma. While trauma and suffering are important to explore, too much focus on these topics alone can erase histories of queer communities, cultures, life, joy and success.

Playful excess, lush extravagance, a love for artifice and outlandish exaggeration and androgyny — such traits are part of the esthetic of “camp,” and indeed, as Dyer notes, an aspect of Garland’s queer appeal. But these themes are not explicit in the movie.

The Myth of Isolation

Dan and Stan also seem isolated from any sense of a larger queer world and social structure, or other queer Garland fans, which would have been available in a major city like London. Viewers of Judy don’t get a sense of the large networks of queer communities existing in urban settings. As queer historian George Chauncey discusses, a “myth of isolation” in early 20th-century gay men’s history assumes that “anti-gay hostility prevented the development of an extensive gay subculture and forced men to lead solitary lives.”

While it is true that laws often did penalize queer folks from organizing openly, and these laws made networks harder to develop without legal repercussions, Chauncey argues that there existed a complex, thriving queer underground and that many queer folks were anything but isolated.

Even Radclyffe Hall’s famous 1928 lesbian novel The Well of Loneliness, notorious for its lonesome and unhappy protagonist, still shows her navigating a variety of different subgroups and communities of other people like her. The book was published in England 40 years before the plot of Judy.

Historian Rochella Thorpe discusses how thriving networks of Black lesbians and queer folks have existed throughout American history, despite the fact that scholars often overlook them.

For example, performance studies scholar Malik Gaines has explored how divas like Nina Simone and (drag queen) Sylvester have been part of a larger context of Black performance that has embodied and realized new models of social transformation connected with race, gender and sexuality.

Recently, Black American playwright Michael R. Jackson’s Pulitzer Prize-winning play, A Strange Loop, has explored the relationship between the perceived queerness of musicals and Black voices and experiences that are frequently excluded from this vision. His protagonist, Usher, is writing a “big, Black and queer-ass American Broadway show.”

The show demonstrates how the pervasive racism of Broadway and New York create white-centric tales of queerness that we also see in Hollywood films like Judy.

The stories of characters like Stan and Dan in Judy — the solitary gay couple who connect with Garland because they sense some of their pain in her — point to some meaningful themes, and such stories are valuable and worth telling.

It is also important, however, to hear and invest in broader narratives. How about some stories about Black diva Diana Ross, Puerto Rican-born American diva Rita Moreno, Filipina diva Lea Salonga or Cree diva Buffy Sainte-Marie and their meanings to queer communities? Jennifer Hudson will be playing Aretha Franklin in the upcoming film Respect. Wouldn’t it be a fantastic opportunity to explore Franklin’s significance to Black queer fans?

Let’s hear more stories that emphasize community and empowerment, those that affirm the presence of queer people historically across culturally and racially diverse communities or that reflect both the joys and creativity of queer communities.

We have seen a lot of stories that centre the sadness, isolation, and suffering of white, cisgender homosexuals: it’s time to push for something more.