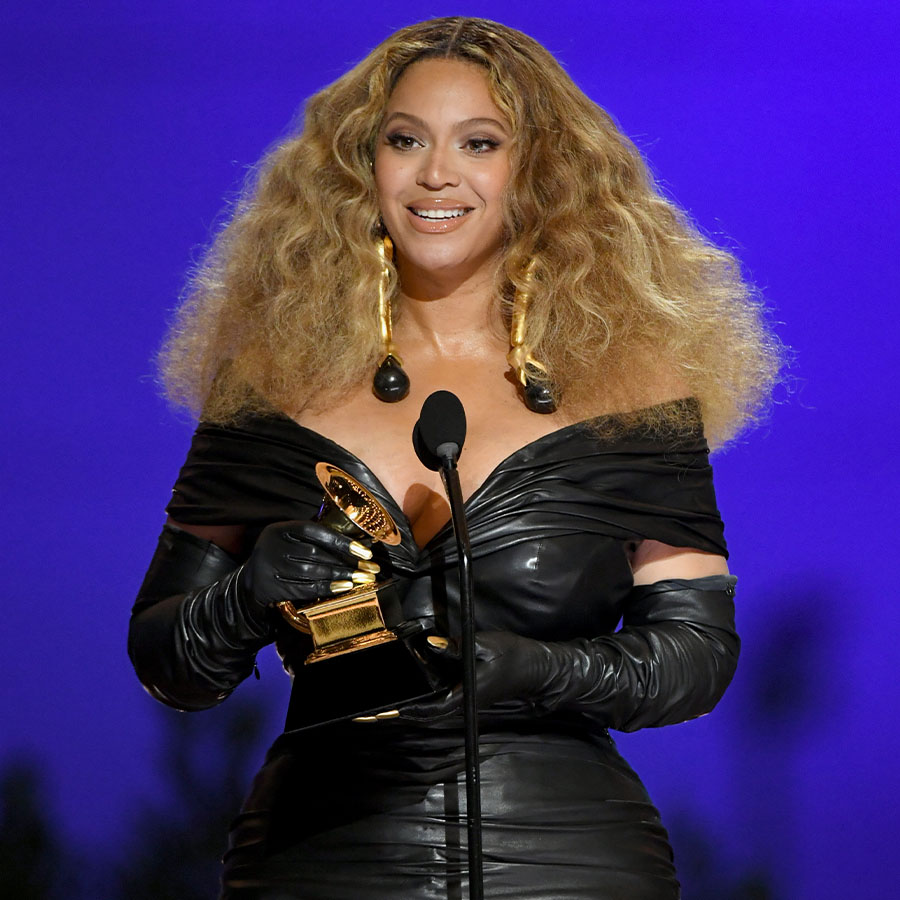 The 63rd Grammy Awards, postponed from its original January date, tonight became the first ceremony of this entertainment awards season to add back in a wealth of the kind of live performances we’ve all been starved of, as well as in-person presentation and acceptance of awards. This COVID-safe effort included designer masks to match the designer gowns and an open-air set with a view of the Staples Center (where the event is usually held at a capacity of many multiples), behind host Trevor Noah.

Grammy producers came up with some inventive tricks to make the proceedings flow, such as including remote presenters from hard-hit legendary independent music venues from across the country (the night manager at L.A.’s legendary Troubadour club, a bar owner in Nashville, and the tour director for the Apollo Theatre in Harlem). Overall, there was none of the feel of a Zoom party, as plagued the recent Golden Globes where the stars appeared from their living rooms and the whole thing had a tired and stilted drag. The effort the Grammys made to bring some glitz and live excitement back into the awards-show mix feels like a breath of fresh spring air. Here are some of our highlights.

The customary fade-in array of faces we lost this year took on a remarkable poignance. In a time of such heavy loss — the official Grammy.com website lists more than 1,000 notable musicians lost since last year’s broadcast — it is a credit to the recording industry academy that it took time early in the broadcast to appreciate just how much talent is gone. In addition to special performance tributes to Little Richard (by Bruno Mars and Anderson.Paak), Kenny Rogers (Lionel Richie sung Lady in his honour and choked up at the end), and Brandi Carlile who sang a hit from the late John Prine. The peal of Eddie van Halen’s guitar, a chorus of Bill Withers’ “Ain’t No Sunshine,” a riff of Charley Pride: the roll of names—Helen Reddy, Mary Wilson, Johnny Nash,  Johnny Mandel —was hard to watch without a lump in your throat, different than other years.

Legends in the Winner’s Circle

The pandemic meant that the annual Person of the Year presentation was skipped this year. This omission contributed to the shift in balance of representation generationally. Music is an art form of the new and the next and because there wasn’t a packed red-carpet parade of the good and the great legends of the music world, it meant the focus on young artists was sharpened. That makes sense as albums of the year do usually go to the hot young things.

But this made the Grammy Premier presentation—the awards they give out ahead of the broadcast—take on new weight. Here are the legends honoured for new work this year.

Dolly Parton, who just turned 75, won Best Christian Contemporary Music/Presentation for “There Was Jesus.” That marked her 50th Grammy nomination. Parton won for the same category last year, and was named Person of the Year in 2019. She said of this year’s winning song, “since I grew up in the church and I’m a person of faith, a song like that would mean more to me than a lot of the others, I have to admit.”

And on the other end of the age spectrum, legend-to-be Blue Ivy Carter, age 9, won her first Grammy for her part in the music video of her mother, Beyonce, for their son Brown Skin Girl.

That the night’s biggest nominee did not perform speaks volumes without her saying a word. Beyonce, who has been nominated a stunning record of 79 times for Grammys in her career, announced she would not perform despite the 9 awards she is up for this year for her album Black Parade, released in the middle of the Black Lives Matter protests last summer. The thinking is that she is frustrated by the Grammys for their treatment of artists of colour. Her ambitious visual album Lemonade was overlooked in 2017, as was her joint album with husband Jay Z in 2019. In addition, many of her nominations were for genre awards rather than the higher profile album-of-the-year all-category awards.

Other Black artists, including Drake, Kendrick Lamar and Childish Gambino all skipped the 2019 awards on the grounds that hip-hop artists were not considered for top prizes. Both Kanye West and Frank Ocean have also spoken of their distrust of the Recording Academy and its nominating process and genre rules. And boycotting the Grammys this year was Toronto’s own The Weeknd, Abel Makkonen Tesfaye, whose Blinding Lights sat atop the Billboard 100 for 52 solid weeks, an all-time record, but was shut out from any nominations.

Last year’s Grammys was overshadowed by drama around its chief executive, diversity and gender balance issues and complaints that the nominating committees were overwhelmingly older white males. The academy has made a conscious effort to include younger and broader representation among voting members following the work of a new diversity and inclusion task force.

One of the big winners, Meghan Thee Stallion stood out in a killer orange gown by Dolce and Gabbana with a massive bow in the back; it was also perhaps the best use of a matching mask. Taylor Swift upped the ante with her three-dimensional flower appliques on her Oscar de la Renta mini-dress along with a  matching mask, of course.

Beyonce wore a form-fitting leather mini-dress and giant drop earrings from Schiaparelli. Miley Cyrus’s sister Noah Cyrus also wore a fantastical Schiaparelli creation, this time from their 2021 couture, that looked like a wedding dress with a massive eclipsing veil. Bruno Mars and Anderson.Paak, together now known as Sonic Silk, wore some serious retro rust leisure suits on stage. And the Haim sisters made the case for the Gen Z “middle part” with long straight hair that looked right out of a revival of Warren Beatty’s Shampoo.

Harry Styles, who has recently been romantically linked to actress/director Olivia Wilde some ten years his senior, rocked a leather Gucci suit (he is the label’s muse) with no shirt the best to view his smokin’ chest tattoos and his not-safe-for-work Gucci peel banana necklace. The singer, who won an award for his summer hit “Watermelon Sugar,” is known for his gender-bending embrace of traditionally women’s clothing. For his Grammy performance he rocked a fluffy boa that he cast off dramatically halfway through his song.

This Grammy awards marked the first appearance, nomination and Grammy performance by Mickey Guyton. In fact, while Guyton is the first Black woman ever nominated in the the Best Country Solo Performance category, an achievement she earned for her tune “Black Like Me” — inspired by the 1961 book of the same name and written about her own experiences with racial inequality in the country music industry — research shows she received very little support from airplay on country radio.

Bad Bunny, the Puerto Rican star who sings in Spanish, won for best Latin or urban pop album, a category that was revamped this year to reflect the movement of Spanish language songs into the mainstream.

Several songs that were born out of the demonstrations for social justice and the BLM movement that began last summer were recognized; among these was the song “I Can’t Breathe” by H.E.R., which won a Grammy for Song of the Year.

And on stage, rapper Lil Baby called back to the 2020 BLM protests with a performance of his tune “The Bigger Picture” featuring a standoff with armed police and a makeshift press conference that concluded with him standing a top a police cruiser. The performance featured fellow rapper Killer Mike, actor Kendrick Sampson, a voice over from author and activist James Baldwin and a speech from activist and 2017 Women’s March co-organizer Tamika Mallory, which included a message for President Biden.

“My people, it’s time we stand, it’s time we demand the freedom that this land promises. President Biden, we demand justice, equity, policy and everything else that freedom encompasses.”

Beyoncé and Megan Thee Stallion, who teamed up for the remix of the song “Savage,” made history as the first female duo to win Best Rap Performance. Later, they won for Best Rap Song, tying Beyoncé with singer Alison Krauss for “most Grammy wins ever by a female artist and by any singer, male or female” with 27.

Later, when she won her 28th Grammy — for R&B Album of the Year for Black Parade — she broke the record while also tying producer Quincy Jones as the most-awarded living artist in Grammy history (British conductor Georg Solti, who died in 1997 at age 84, has 31 total Grammys).  In her simple and heartfelt acceptance speech she said, “I believe as an artist is it my job to reflect the times.” That she most certainly did, delivering an album into the heat of a moment of revolution.

Taylor Swift won Album of the Year for Folklore, her surprise mid-pandemic release. The album has been dubbed the epitome of the new concept of “cottage core,” in reference to its attempt to transcend and romanticize of our current state of quarantine. With tonight’s win, she becomes the first female artist ever to win album of the year three times.

The Record of the Year, which was presented by nine-time Grammy winner and former Beatle, Ringo Starr went to Billie Eilish for the second year in a row for Everything I Wanted. Looks like that is exactly what she got.