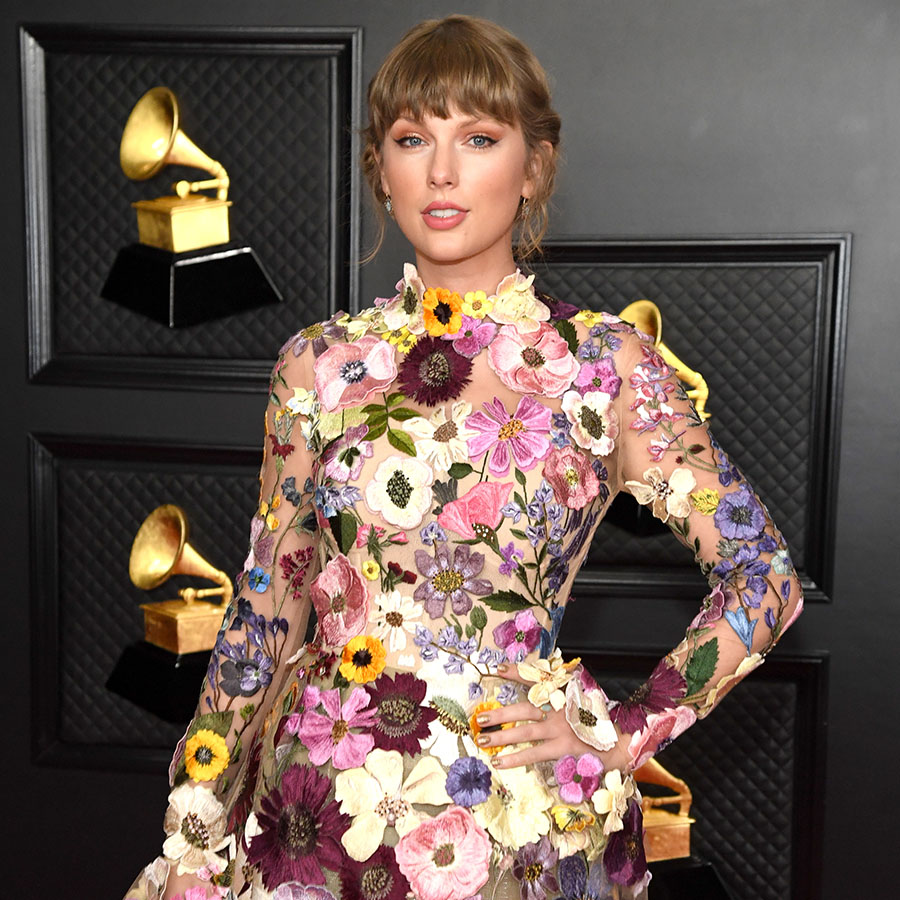 Taylor Swift added a fashion win to her night with this floral number by Oscar de la Renta. Photo: Kevin Mazur/Getty Images for The Recording Academy

Hosted by a Trevor Noah in an elegant Gucci tux, the 63rd annual Grammys presented the now familiar awards show mix of in-person, virtual appearances, and a socially distanced, outdoor awards ceremony. On the music industry’s biggest night, artists were clearly ready to dress up and, as usual for this event, looks ran the gamut from glam to garish, haute couture to halloween costume. Here we bring you the good, the bad, and the inexplicable.

Draped in Chopard diamonds and a Dolce & Gabbana gown, the singer hit the red carpet in full Marilyn Monroe in “Diamonds are a girl’s best friend” mode to celebrate her four nominations. Nominated for four awards, the singer-songwriter upcycled her signature $10 skeleton t-shirt with an ornately beaded dress by Thom Browne who fashioned a topcoat embroidered with the pattern for her brother and escort, Jackson.

The multi-nominated rapper hit his DIY red carpet in colourfully chic Dolce & Gabbana before performing an extended version of his hit “ROCKSTAR” — decked out in Chanel bling — with a full choir.

Nominated for six awards, including Record of the Year, the former model nailed it in a dazzling sheer lavender Versace with a butterfly bodice.

The Colorado country singer accessorized her cream custom made Armani Privé suit with a glittering crystal-draped bodysuit and a statement necklace in place of a shirt.

Known for his nonbinary fashion sense, the UK pop phenom opened the show with a performance of ‘Watermelon Sugar’ wearing a black leather Gucci suit and marabou boa before beating out Dua Lipa, Billie Eilish, and his ex, Taylor Swift, for Best Pop Performance. Styles had two other wardrobe changes in the course of the evening but one element remained consistent — he wore a different colour boa each time.

Up for six awards, the prolific 10-time winner who released two albums in 2020, attended in person, swathed in flower power couture by Oscar de laRenta. Nominated for Best New Artist, Cyrus went for it in a Venus on the half shell style gown by Schiaparelli Haute Couture. The multi-instrumentalist channelled the 70s a little too literally in an aubergine velvet ensemble by Peter Dundas to which she matched her trademark sunglasses. Este, Danielle, and Alana Haim, the California pop trio whose ‘Women in Music Pt. III’ was nominated for Album of the Year opted for coordinating Prada that looked more suitable for the Starship Enterprise than the red carpet. Unzipped to her navel, the Record of the Year nominee may have been making a nod to JLo’s infamous dress for the 2000 Grammys but missed the mark in a garish custom Cavalli that topped a feathered skirt with a moto jacket style bodice. Not to be outdone, violinist Mapy won Absolute Worst look of the night in a semi-sheer stretch mini that revealed her black underwear and thigh-high python striped white boots.

In head-to-toe Gucci, the precocious pop supernova proved once again that what we love about her isn’t her fashion sense.