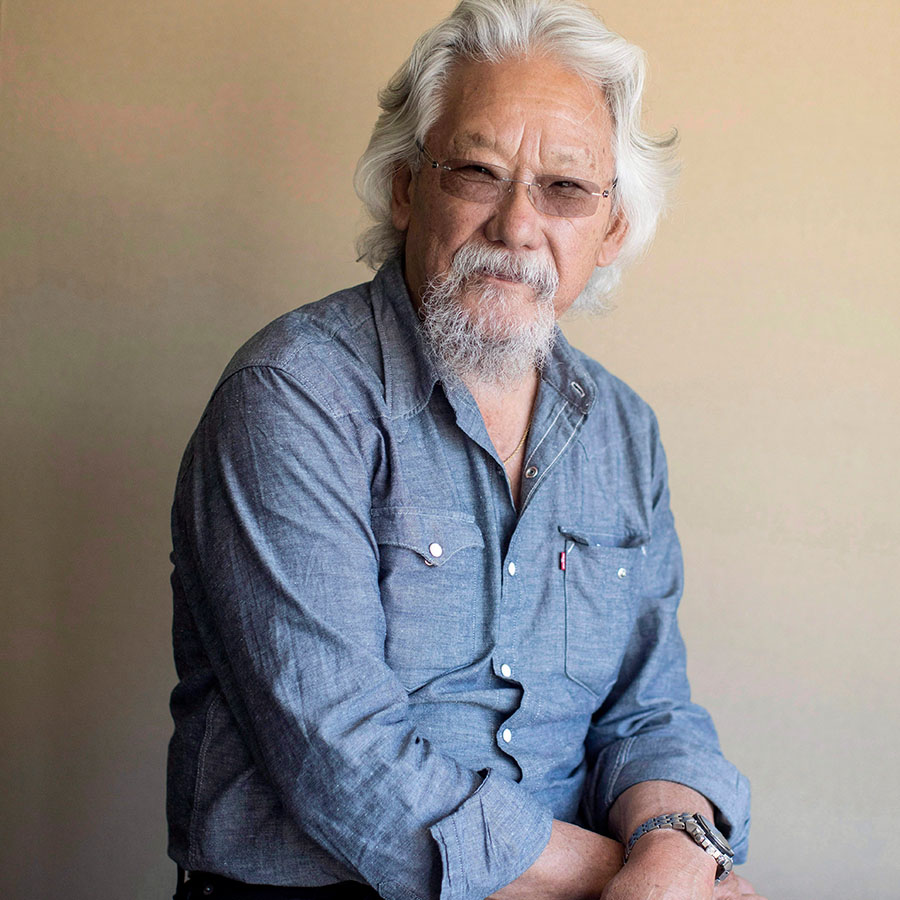 Legendary Canadian scientist, activist and broadcaster David Suzuki, who turns 85 on Wednesday, continues to fight to save the environment for future generations. Photo: Chris Young/ The Canadian Press

In years past, various First Nations groups bestowed upon him aboriginal names like Big Mountain, Mountain Man and Sacred Mountain.

And a mountain is, in fact, an apropos symbol for Suzuki who, as he turns 85 today (March 24), remains absolutely grounded in his belief that the Earth and its natural beauty and resources must be protected at all costs for future generations. And he hasn’t stopped working to ensure that.

While he embarks on his 41st year as the host of the CBC scientific documentary series the Nature of Things this year, Suzuki also launched his first podcast in late 2020 — focusing on the pandemic and working toward a sustainable future — that features interviews with everyone from environmentalists and urban planners to environmentally minded celebrities like Jane Fonda and Neil Young. And, of course, his David Suzuki Foundation continues to promote environmental science and initiatives.

This week, however, the foundation is also promoting a virtual birthday party for its namesake on March 25 — the day after his birthday — which you can learn about and RSVP for here.  And what do you get for the environmentalist who has everything? Well, clean oceans and fresh air to start. And to do so, his foundation set up a donation page where fans and admirers can donate to help save the planet in the name of David Suzuki.

To understand what it means for David Suzuki to turn 85, it’s helpful to understand his approach to aging. Suzuki is known to use the term “death zone” — as in, “I’m in the death zone. Not to be morbid, but I’m fully prepared to die.” That’s what he told Zoomer in a 2010 cover story at age 75.

In 2018, at age 82, he repeated the notion in a piece he wrote for Zoomer, though he punctuated it with the idea that this later stage in life brings with it a unique opportunity:

“This is the most important stage of my life. I am free from the constraints of seeking a job, raise or promotion. I am no longer driven by a need for more money, fame or power. I can speak the truth from my heart. If that offends, it’s not my problem. I have lived an entire life. I’ve suffered failures, made mistakes and celebrated successes. I’ve learned a lot, and now I can sift through those hard-won life lessons for important nuggets worth passing on, like what really matters most, what has been the greatest pleasure, what gives us pride and what we hope for our grandchildren.”

Suzuki chalks up his longevity to good genes and taking care of his physical and mental fitness. But he also notes that he laid the foundation for his current good health decades ago, when he worked as a child on farms and, later, as a carpenter to support his family following their internment in British Columbia during the Second World War — and their subsequent removal from the province at war’s end.

But when it comes to healthy aging, Suzuki’s looked at the science. Last year, the Nature of Things documentary Aging Well, Suzuki Style saw the host explore how much healthy aging depends on genetics and how much it relies on external factors.

To start, he’s cynical about the idea of genetic engineering life extension.

“When you’re 70 or so, life isn’t all that great unless you work on staying healthy and all that,” he told Zoomer at the time. “Who needs another 50 years of a sh*tty life?”

Suzuki, though, did experience some revelations during his research — like just how much of a role cognitive function plays in seemingly instinctive reactions such as balance. Another shocking finding was the connection between oral health — for example, flossing one’s teeth — and aging. “It’s a whole new area that’s coming up that I think we’re just barely understanding now,” he said, noting that the flora and the fauna in our mouths will “infect your gut” and that “living organisms in our bodies are a critical part of our health.”

But the host, who doesn’t claim to possess any secret for healthy aging, instead offered his three tips for living longer, better:

To that third point, he recalled a moment in the documentary when 51-year-old journalist and author Carl Honoré put on an age simulation suit that produces a “worst-case aging scenario” by inflicting a hunch, joint pain and vision and hearing impairments. In an instant, the tall, healthy spry man of 51 transformed into a slow, disoriented, hunched person who required a cane to walk and barely navigated a simple set of stairs.

The sight of Honoré in the suit “filled [me] with shame,” Suzuki admitted. “I have passed so many old people that are crippled up like that, whether it’s loading up in an airplane and you kind of go ‘Oh, damn it, we have to wait for this person.’ So we look on them rather than thinking, ‘My God, they’ve lived a whole lifetime. They’ve got knowledge to share with us. We should talk to them.’”

Perhaps more than anything else, David Suzuki is associated with his efforts to educate others about the environment and how to preserve it.

When he turned 80 in 2016, Suzuki, in a documentary about his life, declared that, “I’m just a human being with all the faults and good features of any other human being.”

Which, of course, might be a bit of a stretch. He is, after all, a tireless environmental advocate; an award-winning scientist and author; a beloved television personality; a top-five finalist in the nationwide vote for the greatest Canadian ever — and, thus, may just boast a few exceptional features that the rest of us need a little work on.

Suzuki’s environmental endeavours have earned him everything from the Order of Canada and UNESCO’s prestigious Kalinga Prize for “exceptional contributions made by individuals in communicating science to society and promoting the popularization of science” to the Right Livelihood Award honouring “courageous people solving global problems” and the Queen Elizabeth II Silver, Gold and Diamond Jubilee Medals. As well, as his Zoomer cover story noted, when international scientists discovered a new Central American fly, they dubbed it “Dixella suzukii”.

Suzuki’s passion for environmentalism, the story added, began at an early age, exemplified by a poem he wrote at age 14: “Let us take a walk through the wood/While we are in this imaginary mood/Let us observe Nature’s guiding hand/Throughout this scenic, colourful land.”

Seventy-one years later, though, he remains modest while noting that the driving force that keeps him working is his grandchildren.

In a 2020 interview with Zoomer, he recalled a moment that occurred a few years earlier as he held his twin granddaughters — who were around five or six months old at the time — and began weeping.

“This has never happened to me before. I just suddenly realized that all of the things that I’m saying [about the environment] are coming true, and these kids don’t have a chance at living a full life. And then I just started to wail. I wailed with absolute grief of realizing what we’re doing. And it took me a while to get my composure back.”

Suzuki, for all that he’s celebrated today, also spoke about the various attacks he’s faced over the years for promoting environmentalism and pushing back against forces of industrialization — including having bullets fired through the window of his home in Vancouver. But it’s also painfully clear that, looking back, Suzuki doesn’t feel that his decades of tireless work and environmental activism have paid off the way he’d have liked.

“People come up to me and thank me for what I’ve done, and I say ‘For what?’” he explained. “I’ve done the best I could, but it hasn’t … We’re going right over the cliff. I don’t feel that it’s had the impact.”

Suzuki remembered starting on television in 1962 while at the University of Alberta and how “my whole involvement with the media is, I felt, that it was important to get the best information possible, get the best science out, so that people could make better decisions.”

And while he still feels that it’s an important role to maintain, the internet has given permission, in a sense, to anyone with any scientific belief to hold steadfast to it — regardless of how inaccurate it may be — because they can always find a website to validate it.

In fact, Canuck comedians Mary Walsh and Cathy Jones, in a recent episode of their CBC Gem digital comedy Broad Appeal, quipped that Suzuki is “The most interviewed man in Canada, and the least listened to.”

In a piece titled “Reflections of an Eco-Warrior” that Suzuki wrote for Zoomer in 2017, the environmentalist noted: “Humankind is at a critical moment. What we do or fail to do over the next few years will determine whether we become extinct by the end of this century. That’s a melodramatic statement, but some scientists now suggest we have passed too many critical tipping points to avoid this possibility.”

And in 2020, his view hadn’t changed much. He likened the environmental crisis to old Road Runner cartoons — in particular, the part where the Road Runner approaches the edge of a cliff and does a 90-degree turn while Wile E. Coyote goes right over the edge.

That, however, doesn’t mean that Suzuki has given up hope.

“To me, the only real hope we have are the remnants of Indigenous cultures around the world because they’re based on a radically different way of seeing their place in the world,” he explained. “They understand that we live in a web of relationships with other life forms and with air, water and soil. And in understanding that, they acknowledge they’ve got a responsibility. You don’t want to screw it up. They give thanks to the Creator for nature’s generosity and abundance. But in giving thanks, they make a promise or commitment — they’ll do their best to ensure that nature will be protected so she can continue to be abundant.”

Suzuki also noted that he’s still “driven by the acceptance that this is where we’re going. I’m going to do everything I can to try to make a difference in how far we fall over that cliff.”

That’s why he’s entered his 41st year of the Nature of Things and launched a new podcast in his 80s — an age when most others are enjoying the fruits of their life’s work. He’s doing it for his grandkids. And for yours.

David Suzuki has a purpose, and very few fans would be surprised if he’s still out here fighting for the environment on his 90th or even 100th birthday.

But today, we toast his 85th, and salute his immovable mountain of a spirit.

To paraphrase the poem of a 14-year-old future Canadian legend: Let us observe Suzuki’s guiding hand / To help save this scenic, colourful land.