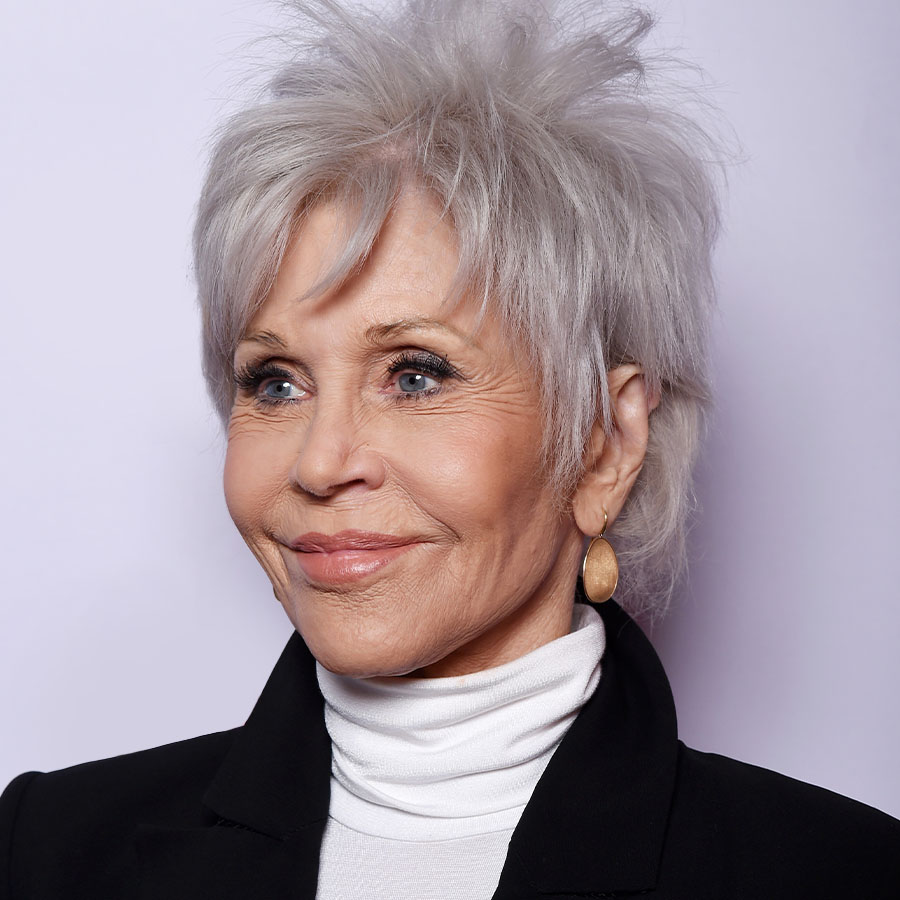 Remember when Jane Fonda was giving advice about working out?

In 1982, she first instructed us to “feel the burn” via her debut Jane Fonda’s Workout exercise video. Today, she’s telling us to feel the bliss while offering advice about conking out.

Ditch the sleeping pills, she suggests, and have a nightly puff of cannabidiol (CBD) instead.

At 83, the Hollywood legend says she drifts off to sleep every night with her Dosist pen that delivers a controlled amount of vaporized CBD (unlike TCH, CBD is not psychoactive; it doesn’t get you high). The Dosist pens became legal in Canada in January 2020.

Fonda decided to give it a try a few years ago after her doctor in L.A. — “my very, very hip good doctor” — told her to get off the low-dose sleeping pill she was using and switch to CBD instead.

“So I went to a dispensary in Los Angeles,” she explained this week to Newbeauty.com, “and I asked them, ‘What is the best CBD for sleep?’ and they turned me on to Dosist and I’ve used it ever since and it really works.”

Fonda is such a big fan of CBD that last year she became a spokesperson for Uncle Bud’s, a New Jersey-based company that sells dozens of hemp-based oil and CBD products, including dog shampoo and conditioner.

On her Twitter feed this week, Fonda posted a promotional message (read: advertisement) for Uncle Bud’s, accompanied by a picture of her very perky self smiling through the open driver’s side window of an automobile and holding up a tube of ointment.

“I take my Uncle Bud’s topical pain relief wherever I go. It takes away my aches and pains from my osteoarthritis and I don’t leave home without it.”

Aside from Fonda’s faith in the product, though, can CBD really take away osteoarthritis aches and pains?

“While there are laboratory studies suggesting CBD might be a promising approach,” reported the Harvard Medical School blog last year, “and animal studies showing anti-inflammatory and pain-relieving effects, well-designed studies demonstrating compelling evidence that CBD is safe and effective for chronic arthritis pain in humans do not exist.”

Nevertheless, a U.S. Arthritis Foundation poll found 29 per cent of respondents reported current use of CBD (mostly in liquid or topical form). Nearly 80 per cent of respondents were either using it, had used it in the past, or were considering it. Of those using it, most reported improvement in physical function, sleep, and well-being; a minority reported improvement in pain or stiffness.

CBD, it seems, is everywhere, and goes everywhere. Yes, even there: see, Miss Bud’s 60mg CBD Vaginal Balm from Uncle Bud’s. Fonda uses and promotes Uncle Bud’s for, well, almost everything (but, so far, not that).

And CBD is such a huge trend these days that the market for it in the U.S. is expected to rise from $2 billion last year to $16 billion in 2025.

Fonda at the Forefront

While using CBD to help heal (or, at least, relieve) what ails you may seem a stretch for some, Fonda, of course, has always been at the forefront of social change. She flaunted her nubile body as Barbarella during the sexy ’60s; protested the Vietnam war as ‘Hanoi Jane’ in the ’70s; proselytized for strong women in the ’80s with her workout videos; and happily took up the role as activist for every worthwhile cause she could find, from civil rights to gun control to women’s rights to climate change and the elimination of fossil fuels — campaigning that she continues to this day.

Remember when she was arrested in 1970 on a trumped up “drug smuggling” charge — she was carrying bottles of vitamins — after returning to the U.S. following her speech at an anti-Vietnam War event in Canada? The Washington Post described the then-32 year old’s ensuing mug shot — which featured Fonda sporting a dark, “jagged, imperfect, impudent fringe” hairstyle (in other words, her iconic shag) and defiant fist in the air — as an image that “defined feminist rebellion.”

Nearly four decades later, in 2019 — the same week Fonda turned 82 — she was cuffed again, in this instance for participating in a high-profile climate change protest alongside other celebs like Sally Field and Ted Danson (who were also arrested).

Legalizing marijuana, however, was never one of Fonda’s causes — nor was using it one of her habits.

“I was never majorly into pot to tell you the truth,’ she said in an interview with WWD.

She, however, told Dujour in 2015 that, “I’ll smoke pot every now and then. I cannot see a movie on pot. The number of movies I’ve seen, thinking, ‘This is probably the best I have ever seen,’ and then I’ll see it again sober and think, ‘What was I thinking?’”

She added, “I have a strong belief that older people have a greater sense of well-being. Older women in particular, it’s like, what the hell do we have to lose?”

That extends to everything from social to personal change — like how Fonda continues to embrace her grey hair (which she debuted at the 2019 Academy Awards), telling Ellen DeGeneres earlier this year: “I’m so happy I let it go grey. Enough already with so much time wasted, so much money spent, so many chemicals — I’m through with that.”

She also noted, in her Dujour interview, that when she meditates, it’s “about this question: ‘How can I remain an interested and full person who is relevant?’”

Her modesty is misplaced. An irrelevant Jane Fonda would be an oxymoron.

Her recurring Friday protests and marches in Washington, D.C., for climate action led to her being arrested a total of five times in 2019, but evolved during the pandemic into the online community Fire Drill Fridays in partnership with Greenpeace.

On Thursday (March 25), Fonda is hosting her first-ever virtual movie night with a screening of the Netflix documentary Chasing Coral, which will be live-streamed through the Fire Drill Fridays website. The film, described on the site as, “a documentary about a team of divers, scientists, and photographers who go underwater to discover why coral reefs around the world are disappearing at an alarming rate,” will be followed by a Q&A with Fonda and the doc’s producer and director.

Without a doubt, when the pandemic ends, the indefatigable actress, author, activist octogenarian with osteoarthritis will be marching on the streets again demanding that something be done to right one of society’s wrongs.

Presumably, she’ll be taking with her a tube of Uncle Bud’s topical pain relief.