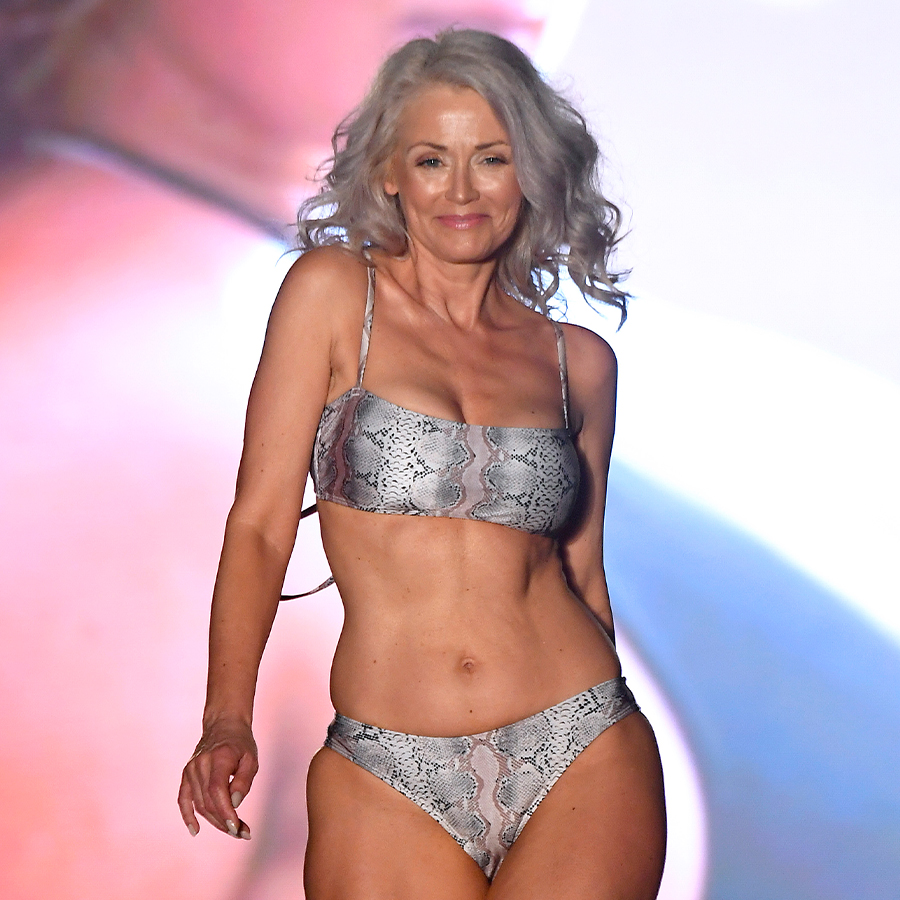 Kathy Jacobs, who became the oldest 'Rookie' ever selected for the "Sports Illustrated Swimsuit Issue," says she wants "to be a part of the change in the way society views women over 50." Photo: Frazer Harrison/Getty Images for Sports Illustrated

A 57-year-old Californian, Kathy Jacobs, made a splash last week when it was announced that she was the oldest ‘rookie’ ever selected for the Sports Illustrated Swimsuit issue. Having made it as a finalist in the 2020 edition, only to return this year as a winner, Jacobs’ victory is as much about redefining notions of age and beauty as it is about sheer determination.

“The first time I didn’t make it past the first round but I didn’t give up!” the 5’ 3” Jacobs — who’d “tried and failed as a petite model for three decades” — said of making the pages of the Swimsuit issue.

Her mission kicked off two years ago when the Calabasas-native was selected for the 2019 Sports Illustrated Swimsuit Runway Show but failed to make the cut for the magazine feature. “I felt a burning desire to try again and to be part of a change in the way society views women over 50,” she told the Daily Mail.

Famed for its annual round up of bathing suit-clad babes since 1964, the Sports Illustrated Swimsuit issue is a ‘bodycon’ beauty contest rivalled for media hoopla only by the Victoria’s Secret fashion show. Not a magazine you’d have tagged to spearhead a diversity campaign, the brand’s taken a boldly inclusive stance since 2014. It’s introduced plus-sized models and older women, bald women, amputees, a model in a hijab and designer burkini, all while running un-Photoshopped images.

“There’s no one ideal beauty,” said MJ Day, the editor who’s spearheaded the brand’s commitment to diversity,  which includes the selection of model Leyna Bloom, 27, as the first trans woman of colour to grace the cover of this year’s Sports Illustrated’s Swimsuit issue.

“Liberating men and women from those narrow beauty confines is something I’m very proud SI Swimsuit is a part of,” Day said. “The world is full of inspiration, and none of it looks the same. It’s a responsibility I feel as a woman, and as the shepherd of one of the world’s most recognizable brands, to champion.”

Jacobs isn’t actually the oldest model to make the Swimsuit issue — that laurel goes to Christie Brinkley who was included at age 63 in 2017. But Jacobs is the oldest rookie, and it’s an honour she views as a platform to modernize the perspective on older women and sex appeal, while also encouraging women to follow their dreams — at any age.

“A year ago, I quit my minimum-wage job sweeping the floor at Dry Bar and said, ‘I’m going to give this one last shot,’” Jacobs told Fox News. “I’m going to take some headshots and send them out. And I got some modelling and acting jobs. I won this contest. I mean, it’s crazy. Anyone out there that thinks it’s too late for them, I’m here to tell them that it’s not. I’m here to tell them to believe in themselves.”

Attributing her trim figure to a low-carb and low-sugar diet, and belly dancing, Jacobs’ late bloomer heyday has also seen her appear in the 2020 Green Day music video for “Oh Yeah!.” Grooving in front of a mirror in a red bikini, and later, a man at her feet, ogling her stilettos, before she leads him off on a leash. One of a handful of women in the clip, all of them far younger than she, Jacobs is the only one pointedly, confidently in charge of her sexuality — the video’s femme fatale.

Overall, our attitudes about women and aging, today, seem less about how others view older women and more about how older women view themselves. There’s Jane Seymour at 70, cavorting on the beach, Salma Hayek, 54, scattering pin-up shots all over her Instagram. Elle MacPherson, the most famous of SI swimsuit models, taking cheeky bikini selfies at 56.

In other words: Be the change you want to see in the world.