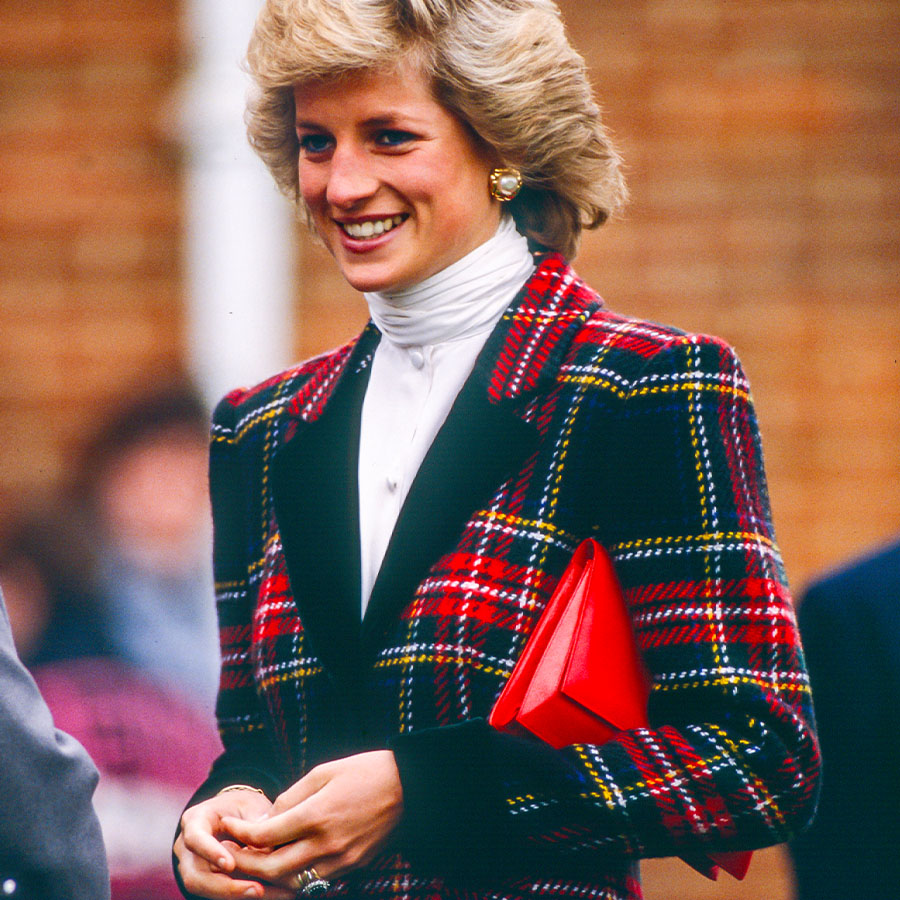 Kristen Stewart recreates this look from Diana's 1989 visit to Portsmouth in the latest photo released from the set of the upcoming biopic 'Spencer.' Photo: Julian Parker/UK Press via Getty Images

A new photograph of Kristen Stewart as Princess Diana from the set of the upcoming biopic Spencer was released this week (wearing a replica of the princess’ tartan blazer, no less) and it set royal-watchers abuzz.

Set over a December Christmas holiday with the royal family at Sandringham, it depicts the decisive weekend in 1991 when the princess chose to end her marriage to Prince Charles (Jack Farthing from Poldark and Blandings) and give up her future as queen consort of England.

The Chilean director of the film is no stranger to biopics. He previously cast Natalie Portman as a bereaved Jackie Kennedy, who stumbled in a bewildered daze around the White House private residence in the aftermath of the JFK assassination in the Oscar-nominated 2016 film Jackie. And as Stewart recently explained to talk show host Jimmy Kimmel, the interpretive biopic will similarly be, “a dive inside an emotional imagining of who Diana was at a pivotal turning point in her life.”

In our first glimpse of Stewart as Diana — released in January (see below) — she looks out a window from below the veil of a hat and is clad in a red wool Chanel that recreates one of the princess’ iconic outfits.

In the latest image, she smiles warmly into the camera from under her famous, elaborately-feathered bob (which, according to Diana’s longtime hair stylist, evolved slowly but still caused controversy within the royal household). The transformation is uncanny, down to the signature head tilt — at least in photographs.

Mimicking the princess in silent poses is easy (Diana was even the inspiration for an entire high-concept fashion shoot in Polish Elle, complete with döppelganger model). But as Stewart also elaborated in an interview with Entertainment Tonight before shooting Spencer, preparation to act the role involves getting into Diana’s head.

“This is a really kind of poetic, really internalized imagining … It’s a really meditative project. There are so many perspectives of her and of her story … it’s just not a black and white thing and it’s a very slippery, really emotionally-packed story for a lot of people.”

Stewart may be the unlikeliest Diana to date, but in the forty years since the famous Wales engagement and nuptials, dozens of other actresses have tried the role. Good, bad, or bland, the most notable interpretations show how daunting — to use one of the late princess’s own words—it is, and how it takes more than the right clothes and coif to convincingly portray the humanitarian and style icon.

The grand scale and pomp of the original event held at St. Paul’s Cathedral on July 29, 1981 may still hold the ratings record, but the first fictional movie is a close second. In Charles and Diana: A Royal Love Story (1982), Caroline Bliss has the distinction of being the first on-screen Diana, beating a rival movie about the relative whirlwind romance and nuptials — The Royal Romance of Charles and Diana — to air by only a few days. As well, the film featured Christopher Lee as Prince Philip.

For better and for worse, one of the most enduring Dianas comes via Dynasty alumna Catherine Oxenberg. As the daughter of Princess Elizabeth of Yugoslavia, she’s a real-life second cousin to Prince Charles and attended a ball in honour of the couple leading up to their 1981 nuptials. (In a post on her personal blog on the eve of Prince William’s own wedding, Oxenberg shares — among other bold recollections — her impressions of being introduced to Diana that night.) A year later Oxenberg would make her screen debut as young Diana in The Royal Romance of Charles and Diana, and again a decade later in its unfortunate sequel, Charles and Diana: Unhappily Ever After.

What distinguishes Oxenberg from the many forgettable royal biopic actresses is that, in spite of the weak script, she has the same casual ease with finishing-school deportment (and hairstyle) as the real Diana. Almost unwittingly she serves up a decent portrayal in one of the most essential ways. Still virtually untrained as an actor at the time, a lack of technique and polish work to Oxenberg’s advantage: her naturalism conveys the same halting excitement, friendliness, open curiosity and winsome naïveté that the real princess displayed in the early years of her marriage. It helps, too, that the cast is rounded out by Olivia de Havilland as Queen Elizabeth the Queen Mother, with Stewart Granger and Ray Milland in key roles.

Spencer aside, there has only been one big-screen version of Diana’s life story — and sadly, though justifiably, it bombed. Naomi Watts stars in Diana (2013), based on the book Diana: Her Last Love. Expectations were high with the noted character actress in the lead, but the nicest thing one can say is that the heavy sense of foreboding feels like a haunted-house thriller. Set over the two years leading up to her tragic death, it isn’t even a good hate-watch.

Naveen Andrews co-stars as Hasnat Khan, the heart surgeon with whom Diana had an intense affair before her later relationship with Dodi Fayed. The dialogue is preposterously wooden but Watts’s performance fares no better and is a simultaneously scheming and vapid portrayal that reduces the decisions of the faceted, complicated woman to cartoonish (and at times insultingly simplistic) motivation.

There’s the suggestion, for example, that her public empathy and land mines awareness work in human rights were all in service of impressing Khan. And even Watts later admitted as much about the project. At least, though, Watts knew what she was getting into. ”Ultimately, the reason I wanted to say ‘no’ so much became the reason I wanted to do it as well. I was intrigued by the challenge,” she said in an interview with Hello at the time. “I mean, in the beginning I thought, ‘How do you possibly take on the most famous woman of all time when everybody feels they know her so well?’”

Jeanna de Waal’s upcoming rendition of the late princess carries a tune in the 1980s pop-rock influenced Diana: A True Musical Story from the Tony Award-winning director of Come From Away.

Melodramatic numbers like “Underestimated” and “If” chart the drama, because, as de Waal put it, hers is a life story filled with moments so huge that they have to use musical numbers to convey the depth of emotion. (Think: Evita.) The Broadway debut may have been postponed due to the COVID-19 pandemic closures, but the musical is headed to back to both Netflix and Broadway as soon as pandemic safety allows.]

The first ‘version’ of Diana in the much-anticipated and hotly debated recent season of The Crown was played by newbie Emma Corrin. She won the Golden Globe and Critics Choice awards for evolving from shy teenager Lady Diana Spencer to Diana, Princess of Wales. It’s an affecting and credible transition as she moves from the girlish idealist (and ruffles) phase to romantic disappointment, and slowly finds her feet in the public role as a global superstar. By the end of the season Corrin’s take has convincingly charted the princess’s dawning shrewdness as she begins to understand the mechanics of power and realizes she has it (and decides what to spend it on). It’s to her credit that Corrin conveys this resolve while never losing the softness and approachability that made her the people’s princess.

Hope springs eternal that the next will be the one to get the princess just right, as Corrin passes the baton to Elizabeth Debicki for The Crown’s next two seasons to portray the series’ final, ill-fated Diana.

“Princess Diana’s spirit, her words and her actions live in the heart of so many,” Debicki said in a statement when casting was announced. “It is my true privilege and honour to be joining this masterful series, which has had me absolutely hooked from episode one.”

As memorable performances in The Night Manager, The Great Gatsby, and Widows have shown, the charismatic Debicki has more than the physical stature to carry it off. She can simultaneously convey strength and vulnerability. It will be exciting to watch her portray the Diana who has grown into her coltish beauty with confidence and poise. There will be a delicate balance to navigate between the insecurities and unhappy reality of the crumbling fairy tale myth and the calculating savvy as she learns to use public sympathy and the media to her advantage.

Royal Exit: The Next Generation

There have been several made for television movies following the fairy tale romances of Diana’s sons, including two Lifetime films about the Duke and Duchess of Sussex. The first, Harry and Meghan: A Royal Romance, premiered in 2018, while the sequel, Harry & Meghan: Becoming Royal, arrived the following year. The latest, Harry and Meghan: Escaping the Palace, a third instalment in Lifetime’s ongoing chronicle of the couple, is now in development (expect it to air this fall), though no cast has been announced.

The Sussex story has so permeated pop culture that it’s begun popping up in unexpected places. Take the guest part in a February episode of NCIS Los Angeles. Not only did the series cast Meghan lookalike Tiffany Smith (who played the Duchess of Sussex in Lifetime’s Harry & Meghan: Becoming Royal), it leaned in and had a bit of fun writing a scene that directly references Smith’s breakout role. When her character wryly introduces herself as “Megan Merkel, with an E” the NCIS agent does a double-take and even remarks on the doppelgänger resemblance. Talk about meta.

The Internet Reacts To the First Image of Kristen Stewart as Diana, Princess of Wales, From the New Biopic, Spencer