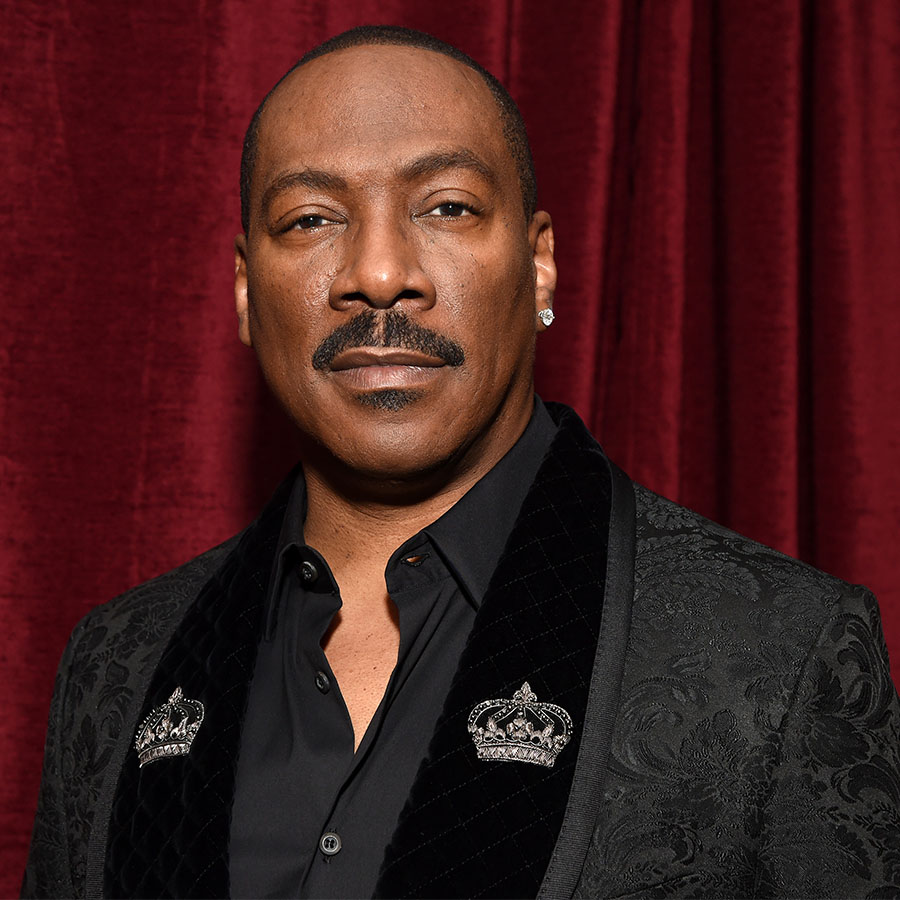 Eddie Murphy, seen here at the Critics' Choice Association's Celebration of Black Cinema in 2019, turns 60 on April 3 and is in the midst of a career renaissance that includes both new hits and callbacks to classic roles. Photo: Michael Kovac / Getty Images for Niche Imports

The recently released Coming 2 America — the sequel to the hit 1988 Eddie Murphy comedy Coming To America — featured newly-filmed “flashback” scenes of the actor digitally de-aged to look like he did in the ‘80s, back when his nickname was “Money.”

And while it’s hard to quantify success in the pandemic/streaming era, Amazon Prime Video, which streamed the sequel, claimed it to be one of Murphy’s biggest hits. In fact, following its March 4 release, reports emerged that it was not only the top streaming film of the weekend, but the top streaming movie of the last 12 months altogether (though the numbers are difficult to fully substantiate).

Either way, the sequel, released 33 years after the original, is a hit. Consider it an early birthday present for Murphy, who turns 60 on April 3. (Yes, you read right.) In a New York Times interview, Murphy characterized this ongoing rebound stage of his career as “a bookend” to his blazing career start. And it’s a stage that both mirrors his early success while illustrating the maturity and patience that often comes with age.

From Raw To Razzies

Beginning in 1980, at only 19 years old, Murphy joined Saturday Night Live and revitalized the show through characters like Mr. Robinson (the host of a Mister Rogers’ Neighborhood parody who lived in a rundown apartment and tended toward petty crime and teaching kids bad words), a grouchy Gumby, an all grown-up version of The Little Rascals’ Buckwheat, and pimp-ish self-help guru Velvet Jones. He stayed on the show through 1984. “It is customary (and accurate),” Rolling Stone later wrote, “to say that Eddie Murphy is the only reason SNL survived the five-year wilderness without Lorne Michaels.”

Eventually, though, he followed the lead of his hero, Richard Pryor, and found a sweet spot jumping between “buddy movies” and putting his stand-up routine on film. And it’s no wonder he earned the nickname “Money.”

On the one hand, his blockbuster 1980s movies like Coming to America, 48 Hours, Trading Places and the first two of three instalments of the Beverly Hills Cop franchise grossed more than a billion dollars.

On the other, his 1983 stand-up special Delirious — featuring Murphy in his iconic red leather jacket and pants — won a Grammy and led to his legendary 1987 stand-up film Eddie Murphy Raw, which grossed more than $50 million and remains the all-time highest grossing stand-up comedy film.

Early on, the twin poles of his comedy were showcased in a bit in Raw, where Murphy talks about getting a phone-call from another influence, Bill Cosby, complaining about his use of profanity. He consulted with Pryor, who suggested he tell Cosby, “to have a Coke and a smile and shut the f— up!” (In 2015, Murphy appeared, but didn’t perform, on the 40th anniversary of Saturday Night Live. He refused to do a sketch about Cosby’s sexual predator accusations, saying he, “didn’t want to kick a guy when he’s down.”)

Murphy’s response to his newfound hyper-celebrity had echoes of Elvis, in that Elvis had Graceland and his Memphis Mafia. In 1985, the Brooklyn-born Murphy bought a 30-room mansion in Englewood, N.J., and nicknamed it Bubble Hill (‘80s slang for “party”) and filled it with friends from before he was famous — intuiting that they were more trustworthy. They were the ones who gave him the nickname, “Money.” (I got a close-up look at this posse at the New York press conference for Beverly Hills Cop 2, and even chatted with a Murphy pal/bodyguard named “Fruity,” who was imposing but friendly.)

It wasn’t, however, a lifestyle he felt that a family man (Murphy has 10 children) could keep up.

“If I were out in the clubs every night, they’d be saying, ‘That’s a shame, look at him, 50 years old, he’s still out at these clubs,” he told Rolling Stone on the occasion of his half-century birthday in 2011. “Homebody, absolutely. I’m supposed to be home, chilling.”

And it’s the lure of family pictures, and the payday that came with them, that arguably blunted the edge that made Murphy a star in the first place. From the mid-1990s through 2010, he mostly dedicated himself to films like The Nutty Professor, Shrek and Dr. Dolittle franchises — not to mention what-was-he-thinking flops like Pluto Nash — which were poor lead-ins for someone with a desire to be taken seriously. While he was still “money” in the sense that many of these films were hugely profitable, he wasn’t pushing any envelopes or making people take notice creatively.

Even Murphy’s Oscar nomination, for his powerful performance as James “Thunder” Early in Dreamgirls (2006) was overshadowed by that perception. At one point considered a front-runner, he lost in the Best Supporting Actor category to Little Miss Sunshine’s Alan Arkin and there was speculation that the pre-Oscar release of Norbit, one of Murphy’s worst movies, in 2007 dissuaded the Academy voters.

“I was making these s—– movies,” Murphy said on Marc Maron’s “WTF” podcast earlier this month. “I was like, ‘This s— ain’t fun. They’re giving me Razzies. Motherf—— gave me the ‘Worst Actor Ever” Razzie.’ It was like, ‘Maybe it’s time to take a break.’”

It’s difficult, then, to peg just exactly when the Eddie Murphy renaissance began. After sporadic — and mostly panned — film roles between 2008 and 2016, CBC suggested the renaissance started in 2019 with his starring role in Dolemite Is My Name, about the “blaxploitation” film star Rudy Ray Moore, which earned Murphy a Golden Globes nomination.

However, you could argue that it actually began as early as 2015. Ironically, after receiving the worst possible award — the Razzie — in 2008, the next award he picked up came seven years later and stands as perhaps comedy’s highest honour: the 2015 Kennedy Centre Mark Twain Prize.

“It hasn’t been lost on me that usually when people have evenings like this, the person is really, really old when they get these awards,” the then-54-year-old quipped while accepting the prize. “They’ll let you wait. Like, one of the greatest, funniest people of all time was George Carlin, and he received this award posthumously. And he’s funnier than all of us. So to be standing here alive and looking like myself still is wonderful.”

In just a five minute acceptance speech, which you can watch below, Murphy proved that he still had “Money” Murphy’s instinct for fearlessly walking the razor’s edge of comedy, from “complaining” that the Mark Twain Prize came with no money to an extended bit about former Prize recipient Bill Cosby, the numerous sexual abuse allegations that had come to light within the previous year and the ensuing fallout.

That same year he made his first appearance on SNL since leaving in 1984 as one of the most highly-anticipated guests for the show’s 40th anniversary. And since then, the Eddie Murphy renaissance has offered a mix of callbacks to past hits and new projects creating buzz.

In 2019, along with starring in Dolemite Is My Name, he guest-hosted SNL for the first time in three-and-a-half decades — participating in new sketches as well as reviving classic characters like Mr. Robinson, Gumby and others. In his monologue he was joined by comedians Tracy Morgan, Chris Rock and Dave Chappelle, all of whom discussed the influence Murphy had on their careers. And Murphy himself quipped that, “If you had told me 30 years ago that I would be this boring stay-at-home house dad and Bill Cosby would be in jail, even I would have took that bet. Who is America’s Dad now?”

The SNL hosting gig won Murphy his first-ever Emmy, at age 59, for Outstanding Guest Actor in a Comedy Series.

Then, talk about coming full circle: in 2020, 12 years after “earning” his Razzie, the Golden Raspberry Awards named him the recipient of The Razzie Redeemer Award, given to a “respected artist” who rebounds from a creative bomb(s). And in addition to the recent success of Coming 2 America, Murphy’s also got another sequel to a 1980s hit in his back pocket with a potential fourth Beverly Hills Cop movie.

Yet, it’s his stand-up comedy that fans are clamouring for the most — including his most high-profile supporters. Then-President Obama, who Murphy met at the Mark Twain Prize event, urged him to return to stand-up. And on a 2019 episode of Comedians in Cars Getting Coffee, when host Jerry Seinfeld bluntly noted, “You know that you not doing stand-up drives people crazy, right?” Murphy recalled that the last time he saw Don Rickles, just months before he died, the 90-year-old told him, “You have to do stand-up again.”

And it does seem strange that the man who starred in the most-watched stand-up concert film ever, and who has influenced a generation of comedians himself, hasn’t worked the stage for decades.

On Comedians in Cars, Murphy admitted that, “Stopping [stand-up] and letting that muscle atrophy is my only regret” and added, “I wouldn’t go out on tour without an act. The hardest thing about getting back on stage again is when you don’t have anything.”

He does, however, have a reported standing offer of $70 million to record stand-up specials for Netflix. But Murphy, who’s since walked back some of the more controversial material in Raw, is clearly not a take-the-money-and-run type when it comes to this. In fact, in early 2020 there were reports of him doing surprise sets in New York comedy clubs, looking to hone his chops before hitting the big stage again.

“I was only gonna take a break for a year,” he added on Marc Maron’s podcast when discussing the semi-hiatus he began in 2011. “Then, all of a sudden, six years go by and I’m sitting on the couch and I’m like, ‘I kind of could sit on this couch and not get off it.’”

But, at 60, it’s that ever-present drive for greatness — perhaps the same drive that fuelled him through his original SNL stint, his groundbreaking stand-up specials and can’t-miss movie run in the 1980s — that prompted him to come back and make the most of his second act.

“I don’t want to leave it where the last bunch of s— they see me do is bull—. So, let me get off the couch and do some stuff and remind them that I’m funny.”

Back on the Case: Christopher Meloni Returns to the Law & Order Universe in Organized Crime Spinoff Ahead of His 60th Birthday