Royal Reflection: When Prince Philip Retired From His Official Duties at the Age of 96 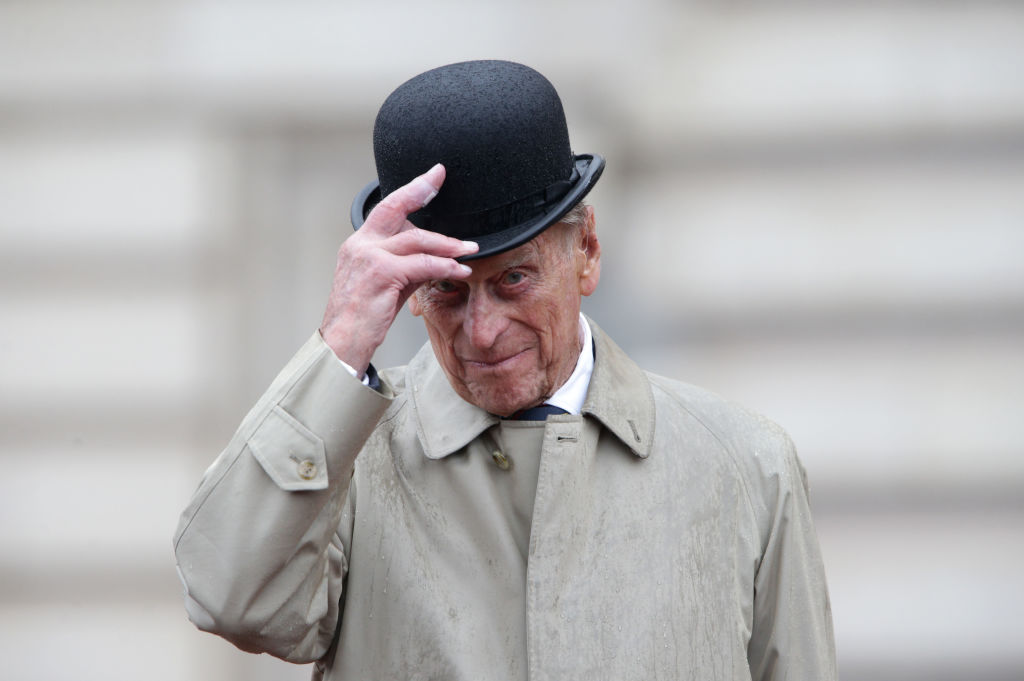 The Duke of Edinburgh raises his hat in his role as Captain General, Royal Marines, making his final individual public engagement at a parade to mark the finale of the 1664 Global Challenge on the Buckingham Palace Forecourt on August 2, 2017. Photo: Yui Mok/WPA Pool/Getty Images

Just two months shy of his 100th birthday, His Royal Highness Prince Philip, the Duke of Edinburgh, died peacefully at home on April 9. As the world mourns the loss of the Royal Family’s patriarch, we look back at a story from our Sept. 2017 issue of Zoomer magazine recognizing the duke’s retirement from official royal duties at the age of 96, after sixty-five years of public service.

A Royal Retirement: An Appreciation of Prince Philip

The announcement came quietly from the Palace on May 4 in the form of a press release sent out to media outlets and posted on the official website of Her Majesty the Queen. “His Royal Highness the Duke of Edinburgh has decided that he will no longer carry out public engagements from the autumn of this year. In taking this decision, the Duke has the full support of the Queen.”

Was Prince Philip ill? He was about to turn 96 in June and he had been in and out of hospitals over the past few years but almost always for what was described as minor infections. The answer was a resounding no. The duke had merely decided that he wanted to retire gracefully before his sell-by date had passed. As the announcement explained, it would be a gradual roll-out or in this case roll-in: “Prince Philip will attend previously scheduled engagements between now and August, both individually and accompanying the Queen. Thereafter, the Duke will not be accepting new invitations for visits and engagements, although he may still choose to attend certain public events from time to time.”

After the news broke there was Prince Philip, dutifully attending a luncheon at St. James Palace when one of the guests apparently told him, “I’m sorry to hear you’re standing down,” Philip was quick to quip, “Well, I can’t stand up much longer.” That wry wit is a trademark of his. And few people in modern times have beguiled and bewildered quite as much as the Duke has over the course of his seven decades in the public eye. The self-professed “world’s most experienced plaque unveiler” has turned up at 22,191 solo engagements, given 5,493 speeches and is patron, president or a member of more than 780 organizations. He was the first member of the Royal Family to give a TV interview and in 1957 presented his own television show, Round the World in Forty Minutes, about his four-and-a-half-month world tour.

Given the fevered pace, one or two or perhaps one- or two-dozen foot-in-mouth situations are bound to arise and even alarm. To wit, from two different official visits to Canada, the first in 1969: “I declare this thing open, whatever it is.” And then in 1976, “We don’t come here for our health – we can think of other ways of enjoying ourselves.” Come on, armchair critics, he does open a lot of things, and many of us feel the same about our day jobs.

It should be noted that this rakish quality has been passed down to his grandson Prince Harry, who has shown his share of questionable judgment in the past before stepping into his current role of the activist prince.

The Duke of Edinburgh is the longest serving consort to a living monarch. And while it may be said that the prince has lived like a king, he has done so without the title or the burden of the crown, thus giving him freedom to speak his mind, to innovate and modernize the monarchy. For example, Philip wanted to make the Royal Family more accessible and supported televising the Coronation as well as being filmed barbecuing with his children for the 1969 documentary Royal Family. Yet despite these attempts at openness, Philip is also known to snap at the press, which has dogged him ever since his engagement to Princess Elizabeth on July 9, 1947. The whole world was captivated by the young couple. For the princess, it was love at first sight; Philip was tall, handsome and dashing – and we know all about loving a man in a uniform. Who could blame Fleet Street and others for wanting a piece of the royal romance? It’s a fascination that has endured.

Take the Netflix hit series The Crown, which has pulled back the curtain on their marriage and humanized them. Matt Smith, who plays Philip, said recently, “He’s got this great conflict at the heart of him. He loves his wife so much. But he hates being emasculated by her constantly. And he hates not being the head of the family … He says, you’ve taken my home, you’ve taken my name. What else are you going to take from me?”

We’ll never know if The Crown got it right, but what we do know is that over the years Philip appeared at times to despise his lot, but then again his wife’s ascension to the throne came much sooner than either expected and destroyed any chance at a normal life. And for a man in the 1950s, especially a naval officer who served with distinction in the Second World War, taking a backseat to your wife was unheard of. On June 2, 1953, the day of the Queen’s Coronation, he knelt before her and said, “I, Philip, Duke of Edinburgh, do become your liege man of life and limb and of earthly worship; and faith and truth I will bear unto you to live and die against all manner of folks so help me God.”

He wasn’t his wife’s equal. He was now her subject. Philip gave up his blossoming naval career when there was every possibility of his becoming First Sea Lord, which is the head of the Royal Navy. Nor could he bestow his name onto his children. It was not something he took lightly, saying at the time, “I am nothing but a bloody amoeba. I am the only man in the country not allowed to give his name to his own children.” Which is Mountbatten – a surname he took from his mother’s side of the family after giving up his Greek and Danish royal titles. Instead, the family surname is Windsor. But in 1960 Her Majesty took action and issued an Order in Council stating that Mountbatten-Windsor would be the surname of her non-royal male descendants.

Philip’s unwavering sense of duty has kept him at the Queen’s side through nearly 70 years of marriage. He’s always been there in the background, and that has been his raison d’être – to know his place, which has been two paces behind Her Majesty. On the occasion of his 90th birthday, he gave a rare interview to the BBC. The reporter talked about how Prince Philip was a child of divorce at the age of 10, with his father moving to Monte Carlo, his mother gone to live in a sanatorium, his four sisters married and moved to Germany, and him, penniless, sent to his grandmother in England. The press have long tried to use this lonely upbringing as a way to explain his irascible character. When asked about his peripatetic childhood, he seemed aghast. “I just lived my life. I haven’t been trying to psychoanalyze myself the whole time.”

Many in the United Kingdom consider Prince Philip’s greatest achievement to be The Duke of Edinburgh’s Awards, which he set up in 1956 and are now the world’s leading youth achievement awards and presented across 141 countries. When told that the public perception is he’s made a huge success of his role as the Duke of Edinburgh, he is abrupt. “Who cares what I think about it.”
Actually, Prince Philip, we can think of at least one person who cares a great deal what you think.

“All too often, I fear that Prince Philip has had to listen to me speaking, frequently we have discussed my intended speech beforehand and, as you can imagine, his views have been expressed in a forthright manner,” said Her Majesty the Queen during a speech in 1997. “He is someone who doesn’t take easily to compliments, but he has quite simply been my strength all these years.”

A version of this article appeared in the September 2017 issue with the headline, “A Royal Retirement,” p. 48-49.