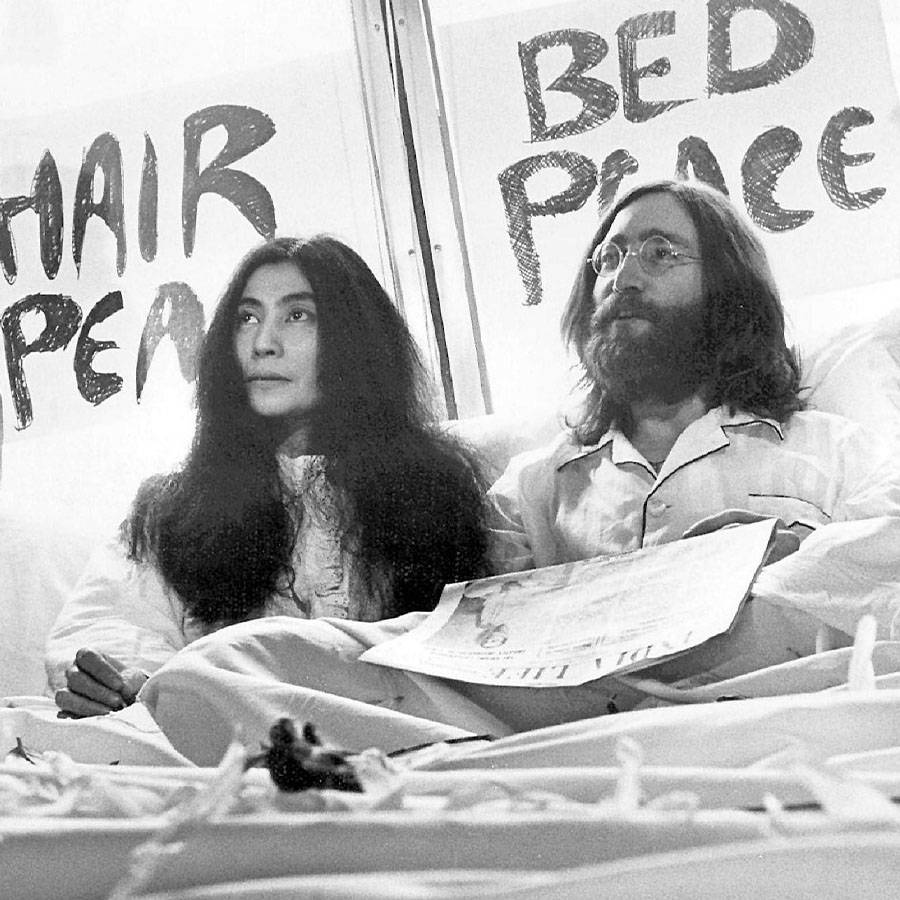 John Lennon and wife Yoko Ono during their legendary May 1969 Bed-In at Montreal’s Queen Elizabeth Hotel, where they recorded the classic anti-war anthem “Give Peace a Chance.” Photo: Montreal Gazette/ CP Images

In the late 1960s and through to the mid-1970s, John Lennon and Yoko Ono became pioneers of using one’s celebrity status as a soapbox for social causes. That, of course, includes everything from their global “War is Over if You Want It” billboard campaign (including one in Toronto) to their legendary 1969 Montreal bed-in for peace — their honeymoon-turned-Vietnam War protest at Montreal’s Queen Elizabeth Hotel featuring celebrities and media surrounding the couple in bed.

The bed-in culminated with the recording of “Give Peace a Chance” — a tune that became both an anti-war anthem and Lennon’s first solo single (he was still technically a Beatle, as the Fab Four didn’t officially break up until the following year).

And this week, ahead of the April 23 release of the box set John Lennon/Plastic Ono Band – The Ultimate Collection, the John Lennon Estate, via Universal Music, revealed a previously unreleased video of Lennon and Ono rehearsing “Give Peace a Chance” at the Sheraton Oceanus Hotel in The Bahamas on May 25, 1969 — a mere six days before they’d perform and record it at the Montreal bed-in (you can watch the video below).

The video, which clocks in at just under three minutes, begins with a shot of the beach from Lennon and Ono’s balcony before turning into the hotel room, where the couple sits on a couch as Lennon plays “Give Peace a Chance” on guitar while playfully improvising lyrics to go with the song’s chorus.

A press release from Universal Music says that the video was “captured by the Lennon’s film cameraman Nic Knowland and sound recordist Mike Lax” and that it “is the earliest known recording of the song.”

The actual recording of the single in Montreal included a number of celebrities and notable personalities, from Petula Clark and Tommy Smothers (of the Smothers Brothers) to Timothy Leary and poet Allen Ginsberg. The single eventually charted at number 14 in the U.S. (where it went gold) and hit the number two spot in the U.K. The Universal release notes that, “although credited to Lennon-McCartney, John later revealed the song was written by him and Yoko and she should have received the co-writing credit.” You can see the official “Give Peace a Chance” music video, featuring footage from the Montreal bed-in, below.

Authorized by Yoko Ono, the set features new mixes of the album’s songs — including “Mother,” “Working Class Hero” and “Love” — as well as “scores of unreleased and rare demos, rehearsals, outtakes, jams and studio conversations” along with “87 never-before-heard recordings.” In addition, singles that didn’t appear on the album, like “Give Peace a Chance,” “Instant Karma! (We All Shine On)” and “Cold Turkey,” are also featured. All told, the box set includes six CDs, a 132-page book, a poster, postcards and more.  Click here to learn more.

John Lennon: His Life in Pictures on What Would Have Been His 80th Birthday